Rain!  In the desert!  Arizona may be receiving some record rainfalls (thanks to the remnants of Tropical Storm Rosa), but we were not going to let that keep us from exploring the Petrified Forest National Park.  On a positive note, the rain washes away down of the desert dust uncovering some brilliant colors. 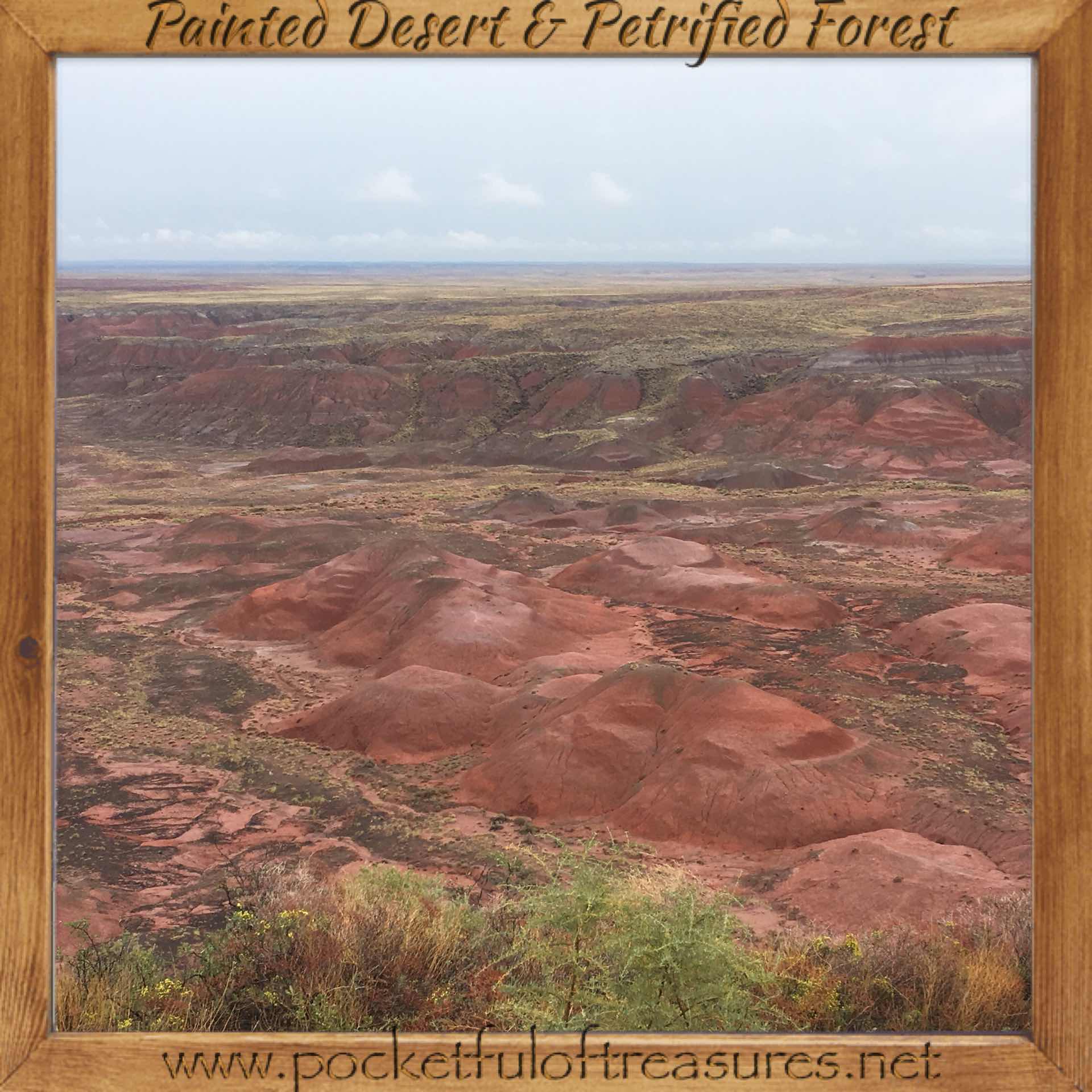 We had planned on doing some off-trail hiking at the park, but changed plans at the recommendation of the park ranger.  For one, many of the backcountry hiking routes cross over a wash, which would be prone to flash floods.  Second, there is a lot of bentonite clay, which swells as it absorbs an enormous amount of water and forms an icky, gooey, slippery, sticky mess that is difficult to walk on.  Plus, should the weather turn more severe, being 2-3 miles out in the backcountry with 6 kids is not exactly ideal. 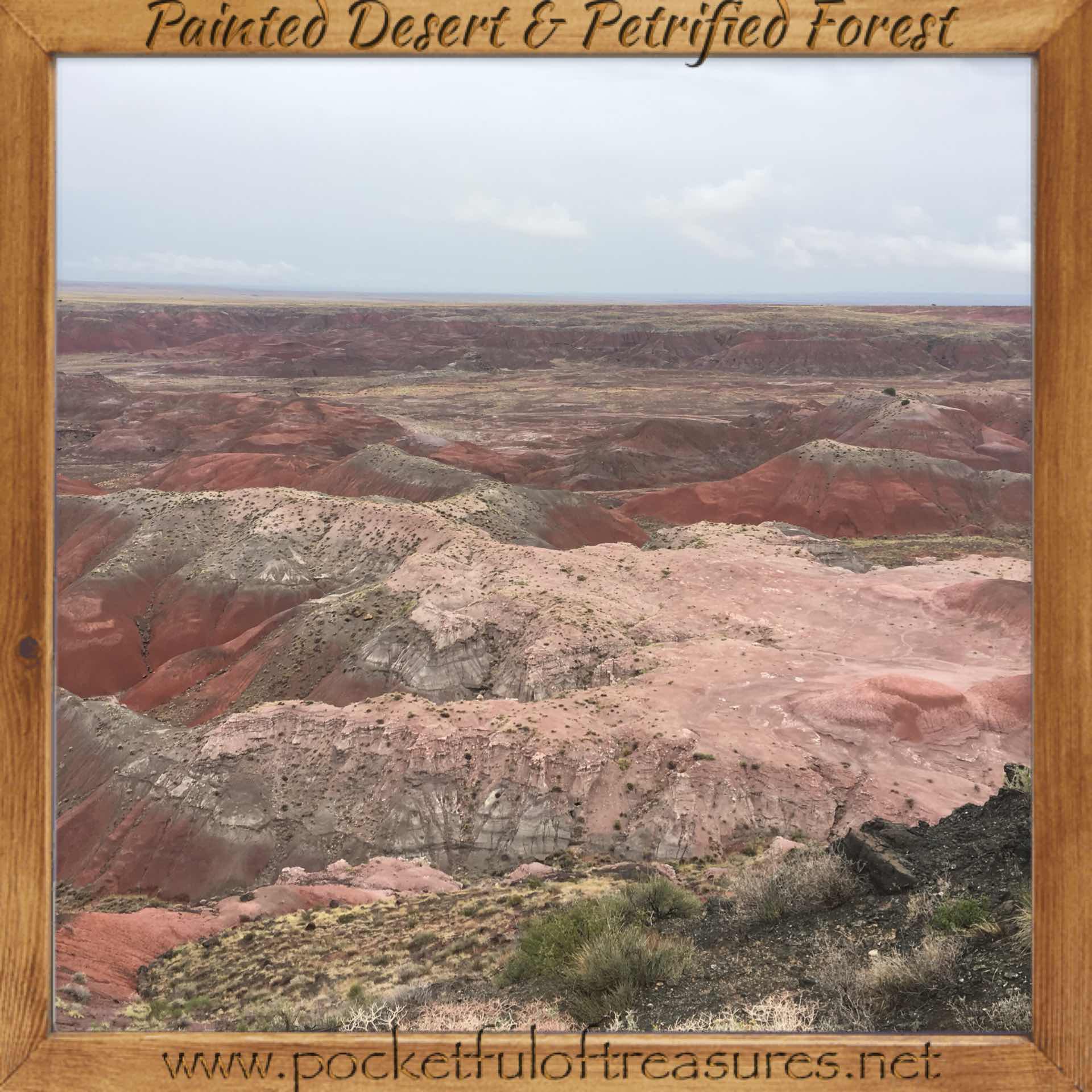 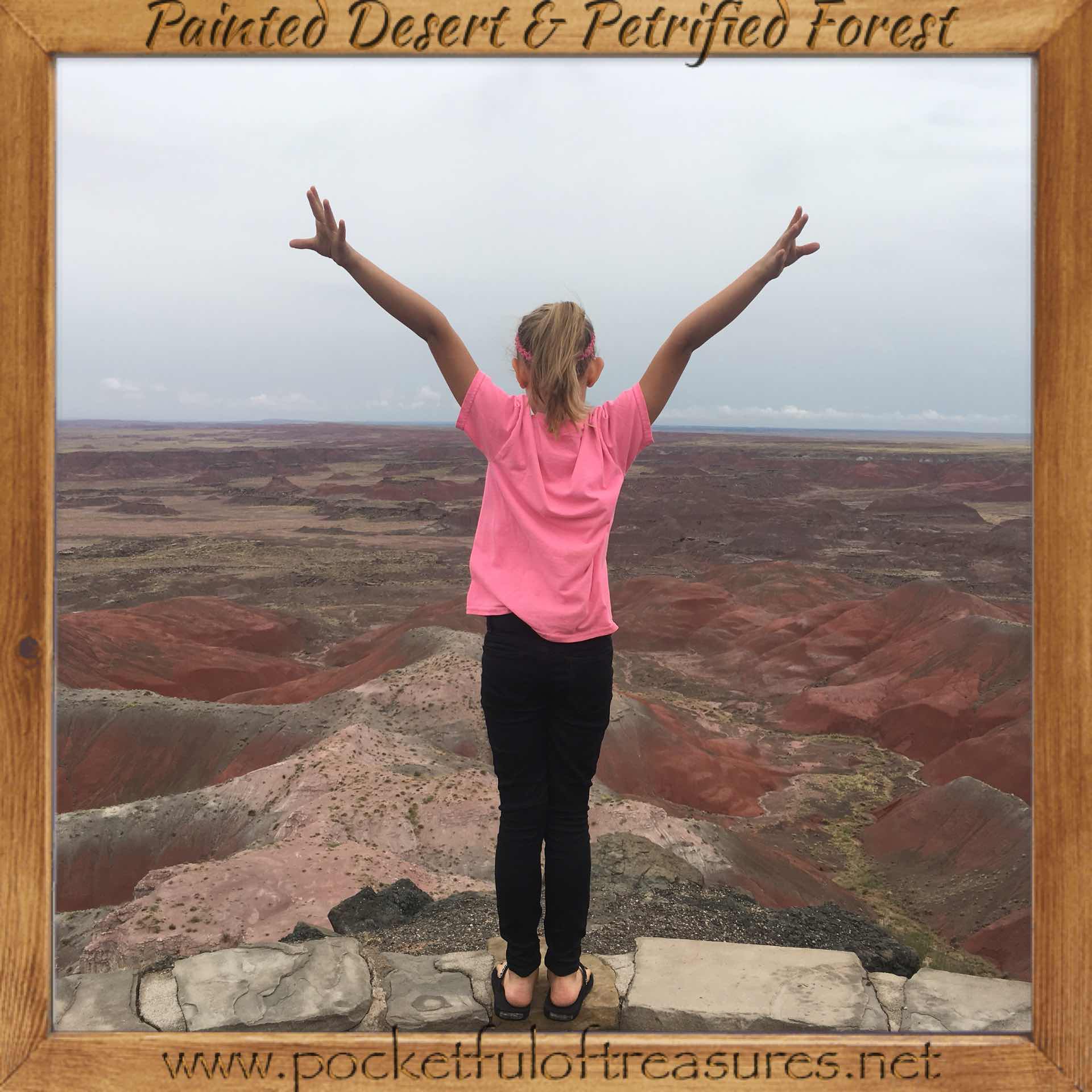 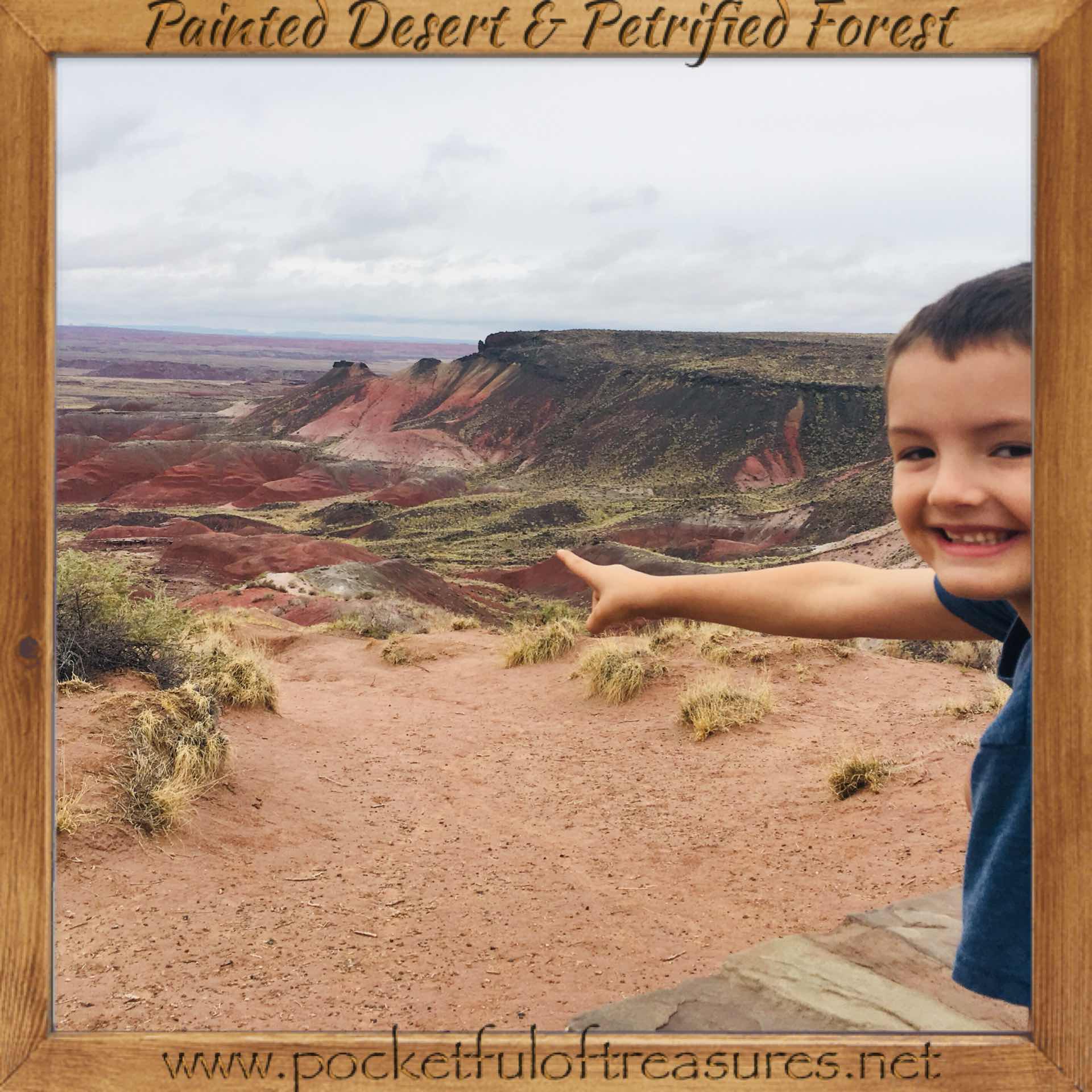 A little ways down the road there are three overlooks (Nizhoni Point, Whipple Point, and Lacey Point), that all offer similar but spectacular views. 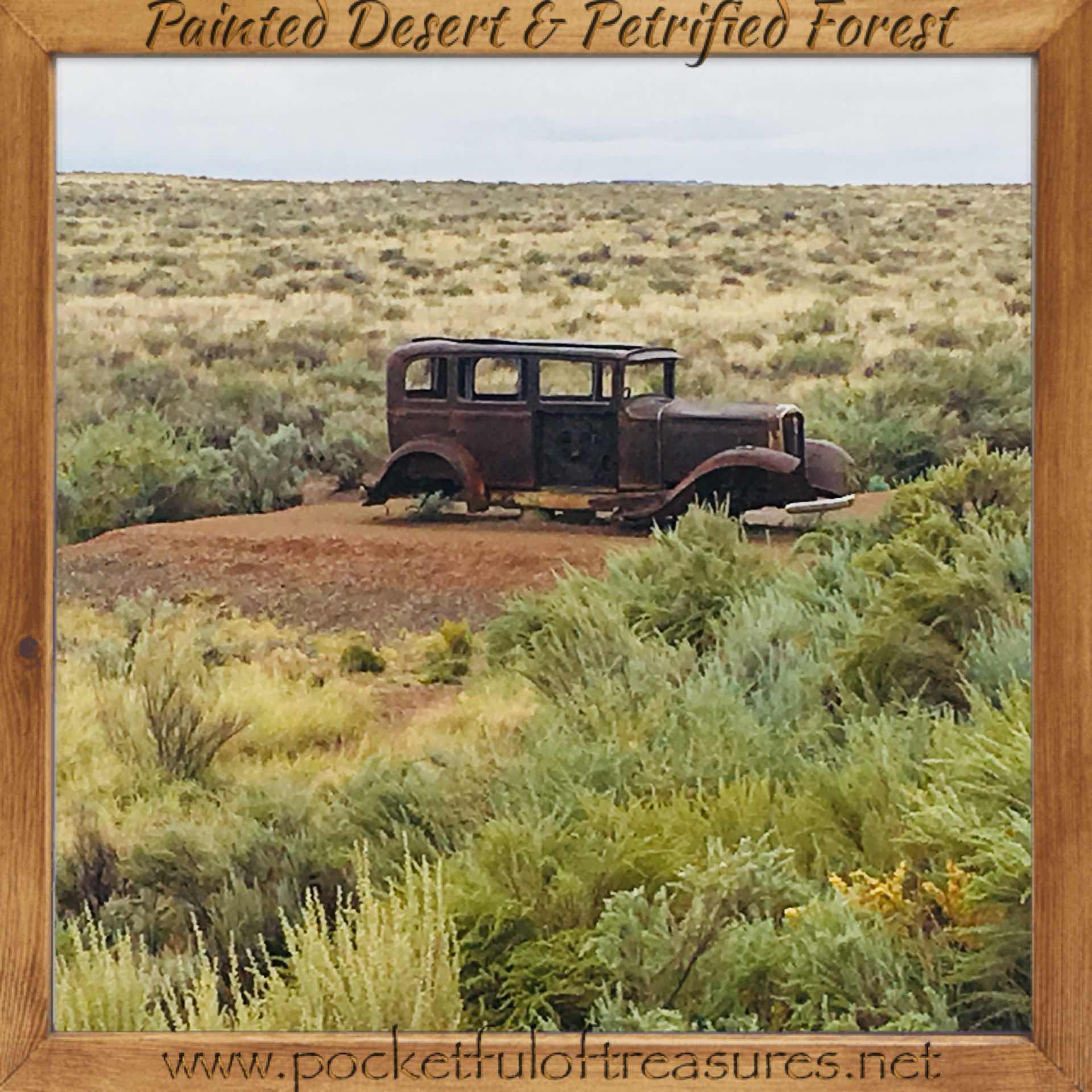 Right before you cross over I-40, you’ll notice a 1932 Studebaker that sits where Route 66 used to cut through the park. 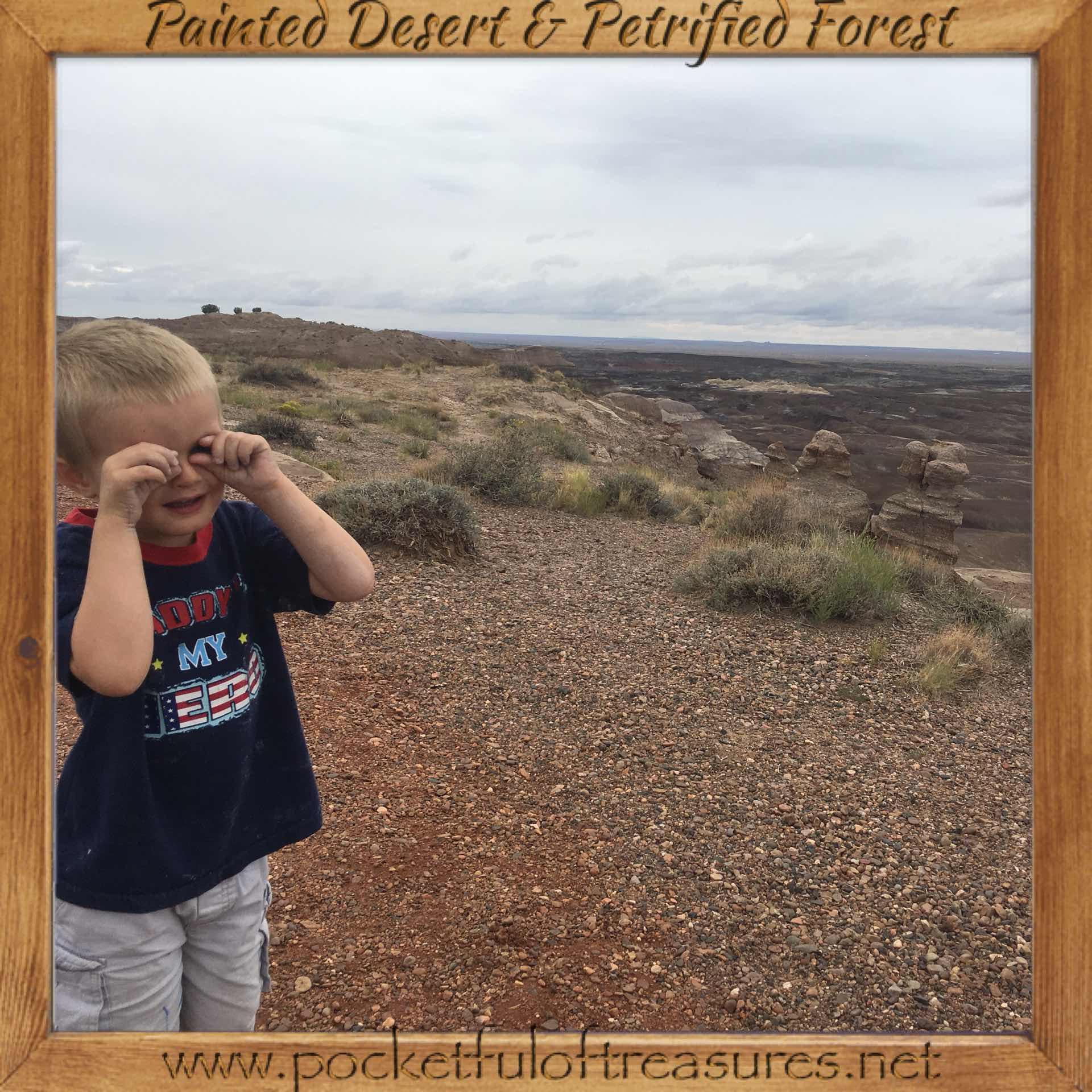 (our son making "binoculars" to see the awesome view)

The Burlington Sante Fe Railroad also crosses Park Road.  We heard a train when we were hiking at Peurco Pueblo, but it would have been awesome to capture some pictures of it coming across the Desert there by the Puerca River. 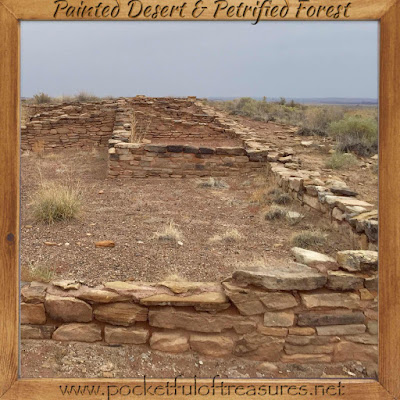 Puerco Pueblo has a short 0.3 mile loop trail that takes you by ancestral Puebloan homes.  It is believed that 100 rooms once stood here and that it was occupied by 200 people.  A great stop for a short history lesson! 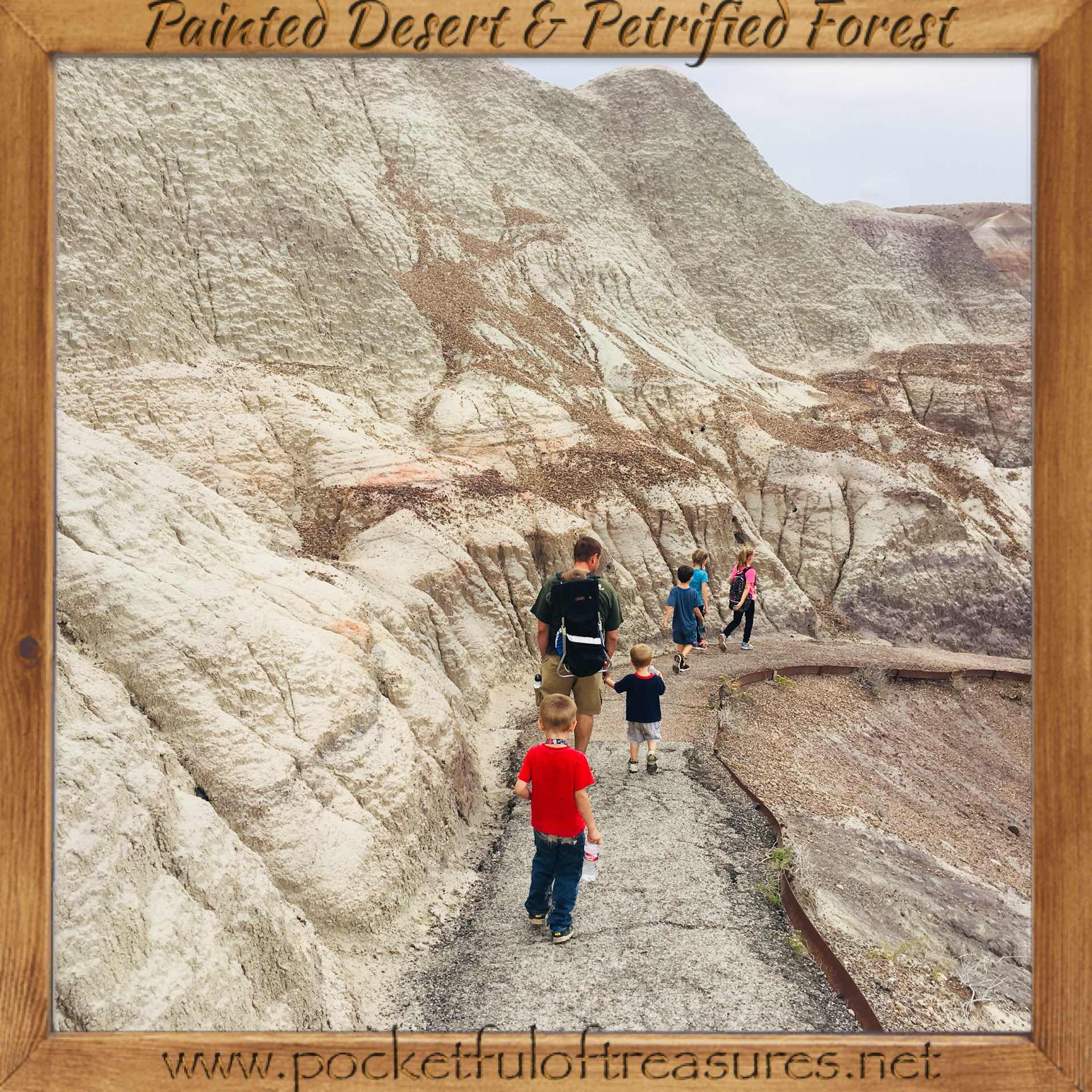 After driving through the Teepees we turned to head to Blue Mesa, a 3.5 mile loop road with a 1 mile trail.  The trail starts with a steep descent into the vibrant badlands speckled with colorful petrified wood.  This was our favorite part of the park! 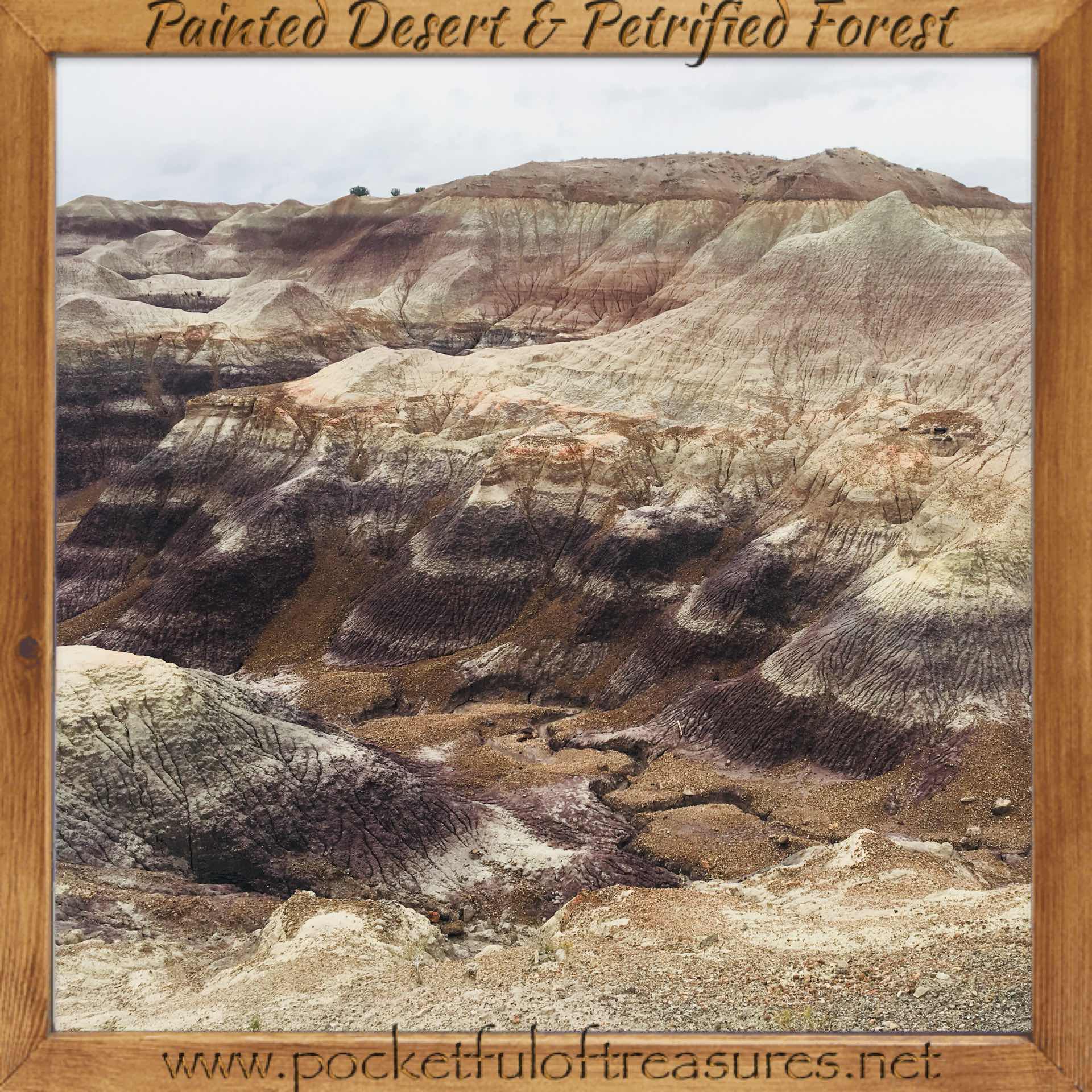 Jasper Forest and Crystal Forest are also speckled many petrified logs.  We were amazed by the variation of color in the petrified wood. 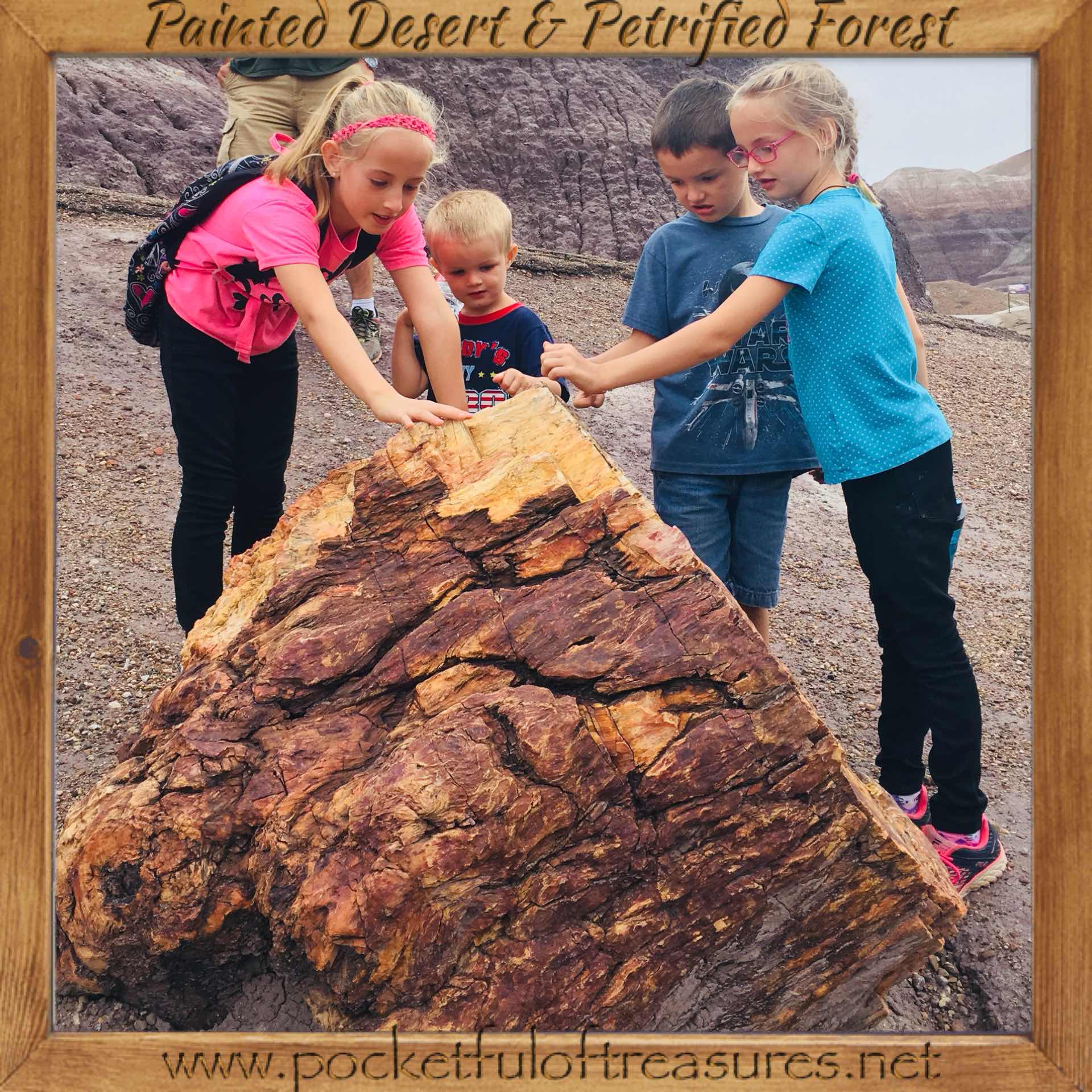 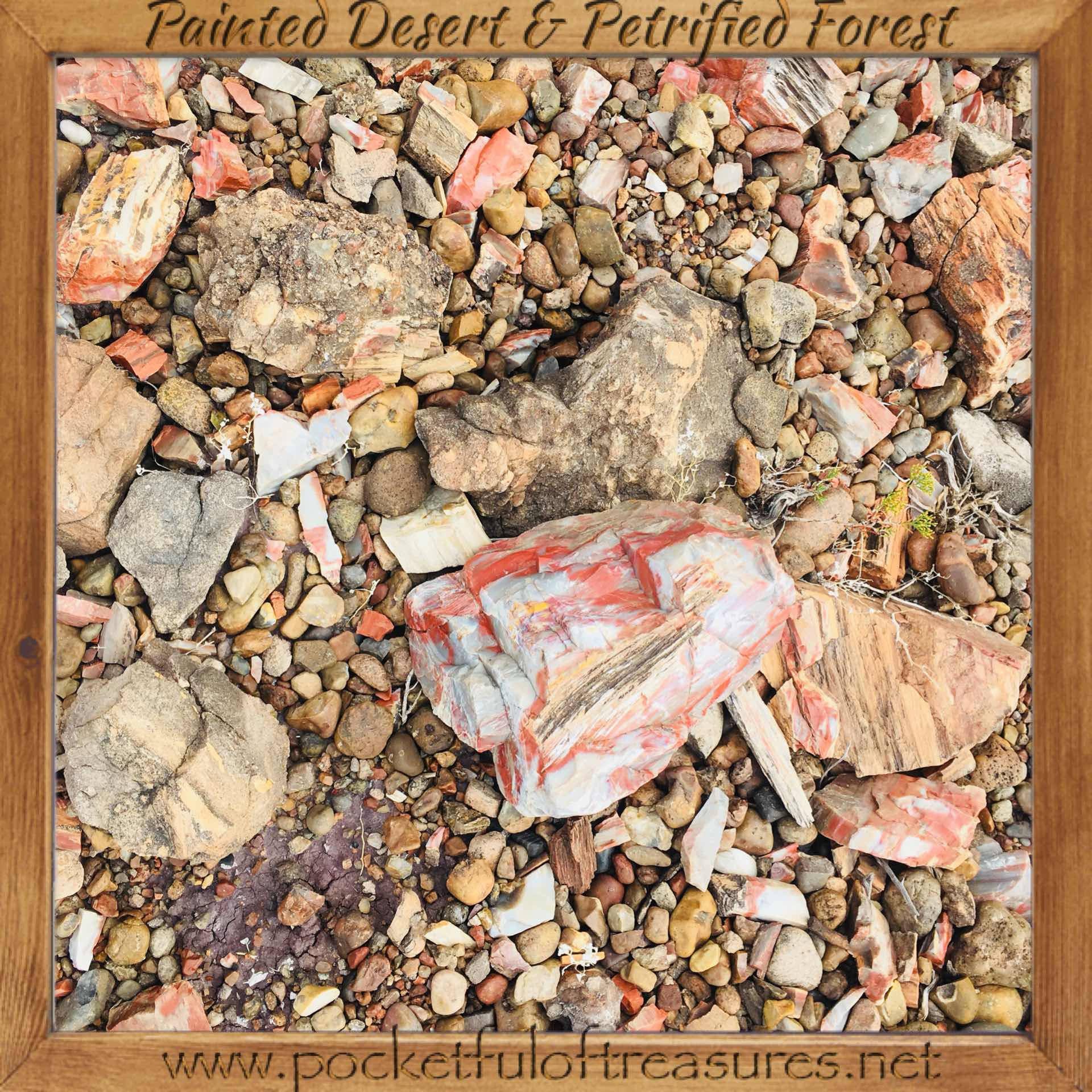 For times sake we skipped Long Logs and finished up the day Giant Logs, a 0.4 mile loop trail located just behind the Rainbow Forest Museum and Visitor Center.  Some of these petrified logs were massive! 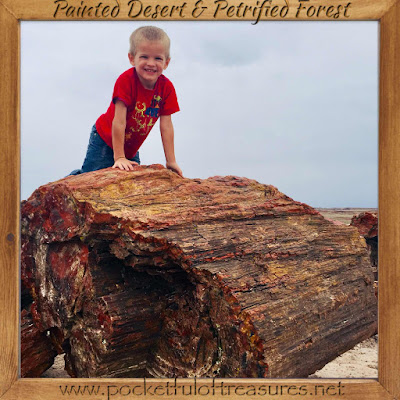 We turned right out of the park to head West on US 180 to Holbrook.  We stayed at the Holbrook KOA, but had to stop by and visit Mater’s Grand Pappy at the Wigwam Motel!  The kids absolutely loved seeing this landmark that was made famous by their favorite movie Cars! 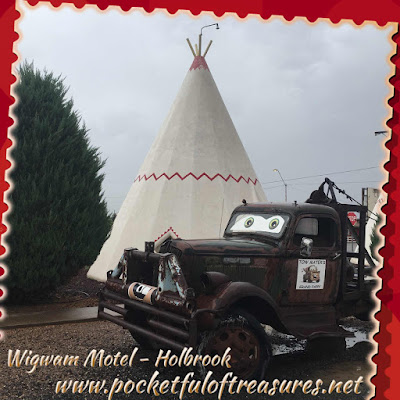 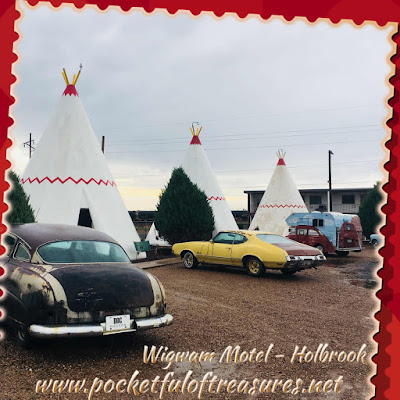 For more of our travel adventures, please visit our travel page on the blog and follow us on
Instagram @pocketful_of_treasures.