"M" was up all night crying in pain; fever rising... another ear infection... another sleepless night.
"Boo" awoke with the rising of the sun as usual - her bright and cheerful self. 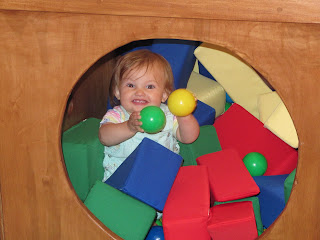 I checked the clock...I had slept for about one hour - two hours max.  My body was resisting; my eyes heavy.  But how can a mommy resist the bright eyes of her child urging her to get up and play. I just had to smile as she babbled and giggled.   So we stumbled to the kitchen where I started making our daily fresh carrot/apple/beet juice.  "Boo" was playing happily at my feet when suddenly she let out a most horrific scream.  I whisked her up into my arms and saw a scorpion beneath her. 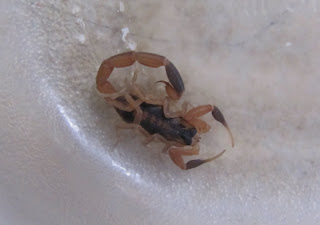 They have frightened this Jersey girl since the day we moved here, and now it stung our precious child...  Holding my daughter trying to soothe her awful scream, I call the doctor while grabbing a container to trap the scorpion (like I said, I'm from Jersey... I don't know the first thing about a situation such as this!), all the while muttering prayers to God that 'Boo' will be okay.  And she is :o)  I put some windex on the sting (per the doctors orders) and she took a three hour nap.
But this mommy was worn out and exhausted (and it wasn't even 8am yet!).  I cried most of the morning (maybe a better part of the day) as we all cuddled on the couch.
I needed to change my perspective.  I needed to stop looking around at the the recent chaos in our home and look up to our Sovereign Lord, who is unchanging and whose love never fails.  I know the pain I felt to see my child hurt by a sting, and thought what it must have felt like for God whose Son faced far greater stings... I reread Isaiah 53  which I studied last week:
ISAIAH 53 (emphasis mine)
" 1 Who has believed our message
and to whom has the arm of the LORD been revealed?
2 He grew up before him like a tender shoot,
and like a root out of dry ground.
He had no beauty or majesty to attract us to him,
nothing in his appearance that we should desire him.
3 He was despised and rejected by mankind,
a man of suffering, and familiar with pain.
Like one from whom people hide their faces
he was despised, and we held him in low esteem.
4 Surely he took up our pain
and bore our suffering,
yet we considered him punished by God,
stricken by him, and afflicted.
5 But he was pierced for our transgressions,
he was crushed for our iniquities;
the punishment that brought us peace was on him,
and by his wounds we are healed.
6 We all, like sheep, have gone astray,
each of us has turned to our own way;
and the LORD has laid on him
the iniquity of us all.
7 He was oppressed and afflicted,
yet he did not open his mouth;
he was led like a lamb to the slaughter,
and as a sheep before its shearers is silent,
so he did not open his mouth.
8 By oppression and judgment he was taken away.
Yet who of his generation protested?
For he was cut off from the land of the living;
for the transgression of my people he was punished.
9 He was assigned a grave with the wicked,
and with the rich in his death,
though he had done no violence,
nor was any deceit in his mouth.
10 Yet it was the LORD’s will to crush him and cause him to suffer,
and though the LORD makes his life an offering for sin,
he will see his offspring and prolong his days,
and the will of the LORD will prosper in his hand.
11 After he has suffered,
he will see the light of life and be satisfied;
by his knowledge my righteous servant will justify many,
and he will bear their iniquities.
12 Therefore I will give him a portion among the great,
and he will divide the spoils with the strong,
because he poured out his life unto death,
and was numbered with the transgressors.
For he bore the sin of many,
and made intercession for the transgressors."
Whatever your present affliction or troubles, may you be encouraged and reminded to look UP because HE came DOWN!
at 6:03:00 AM