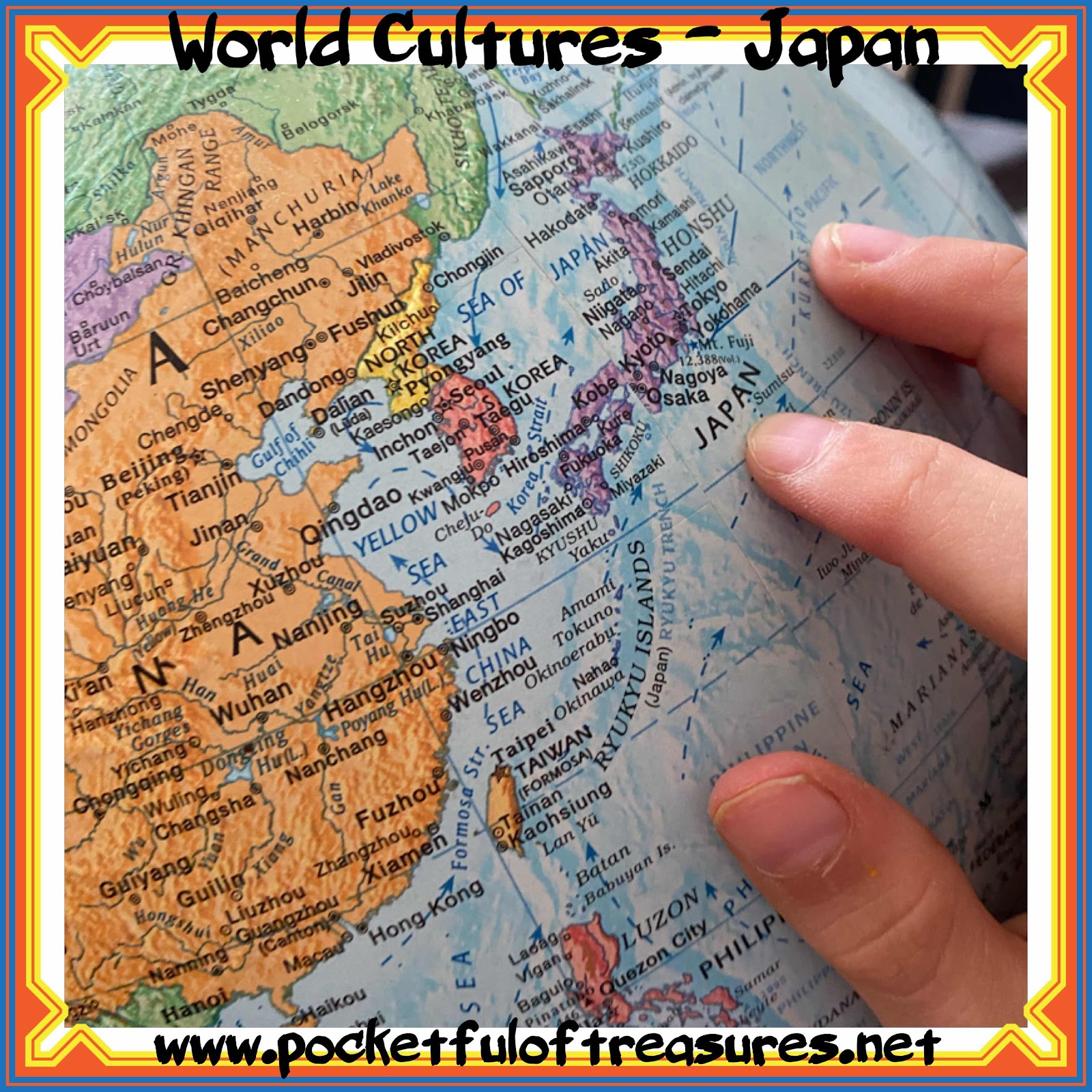 We dove into another homeschool year in early August with a unit study of Japan. We are using Masterbook's Elementary Geography and Cultures curriculum as our backbone for study. It uses the Children's Atlas of God's World and Passport to the World as the main textbooks. Because we operate our homeschool as a one room schoolhouse with all of our children between preschool and 7th grade studying the same subject matter for history and science, I added more hands on crafts and learning activities. One of the things I love about homeschooling the flexibility to be able to make each curriculum your own. Our plan is to study each country for two weeks and to include a country celebration at least one of those weekends during our family night. Considering that the Tokyo Olympics were being aired when we started, we decided that we would switch up the order and study Japan first. We did a brief heritage study of Japan a couple of years ago in American Heritage Girls, so we revisited some of those activities and added more. 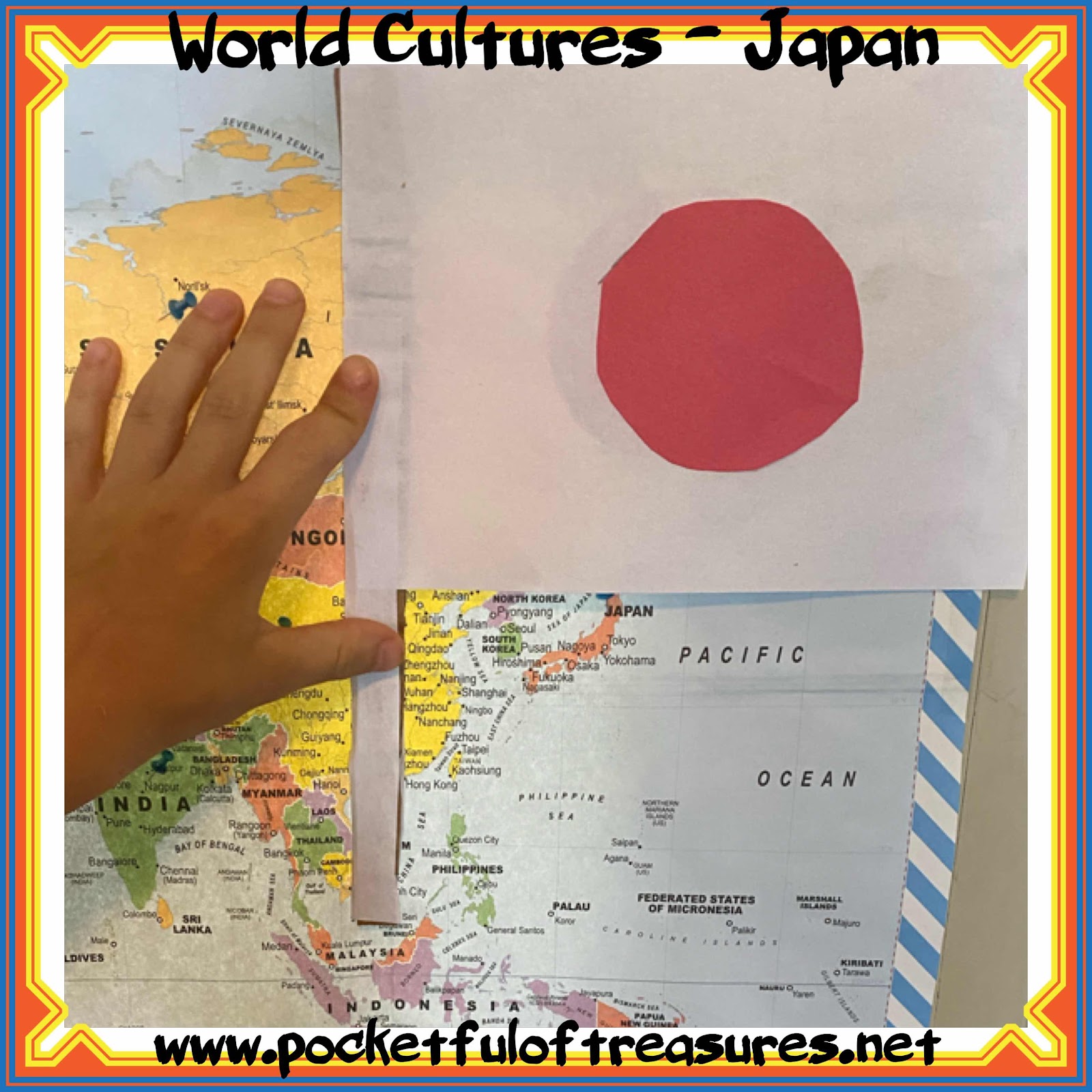 For every country we study this year we will be locating it on both our map and our globe, and crafting the country's flag out of construction paper. 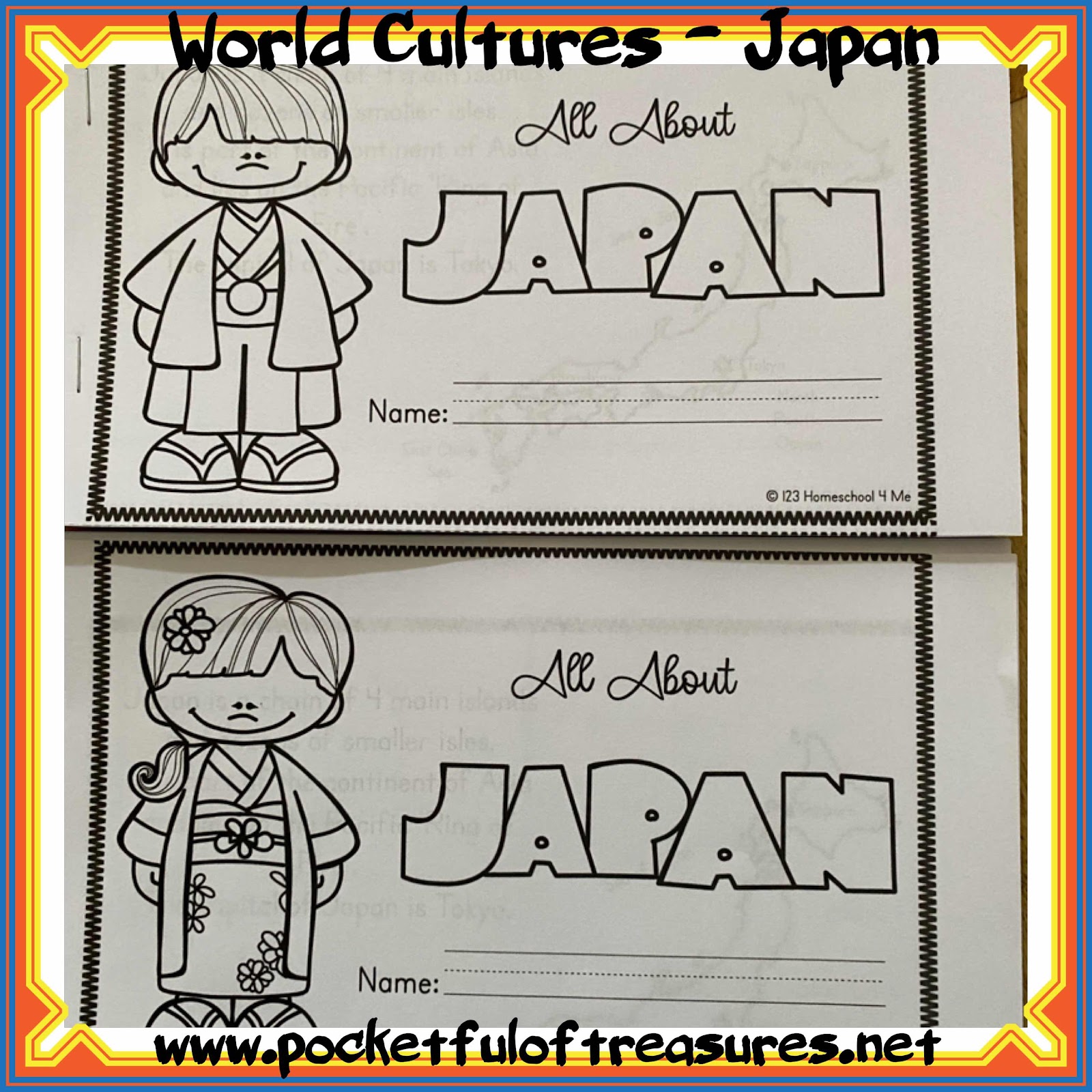 The first day we read the All About Japan booklet, a free resource from 123 Homeschool 4 Me. I love that this resource also doubled as a coloring book that the children could busy themselves with while I helped another child on a project. 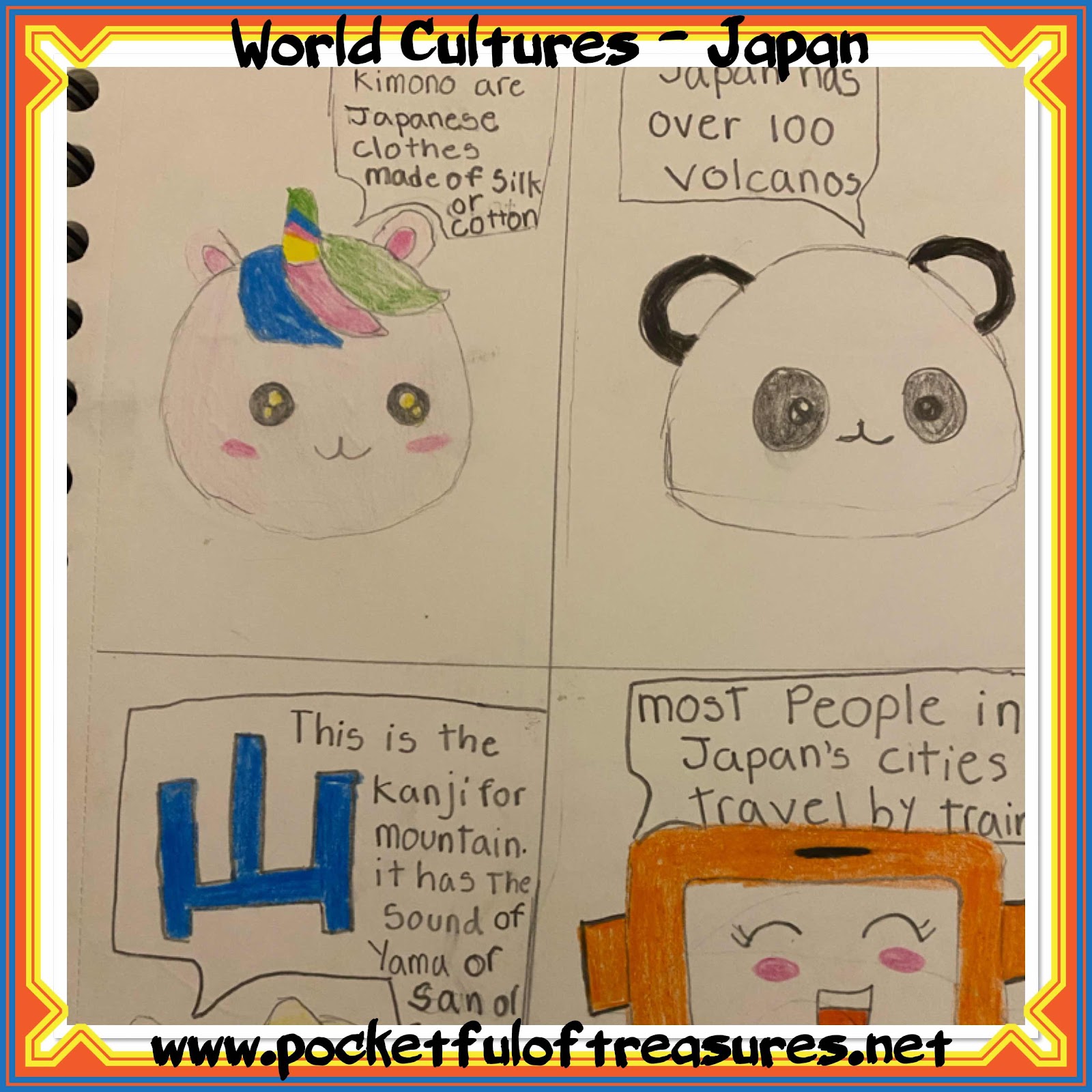 I also assigned the older girls with the tasks of researching other facts on Japan and presenting them in a Kawaii style comic book. Kawaii simply refers to the culture of cuteness in Japan (think Hello Kitty or Shopkins). 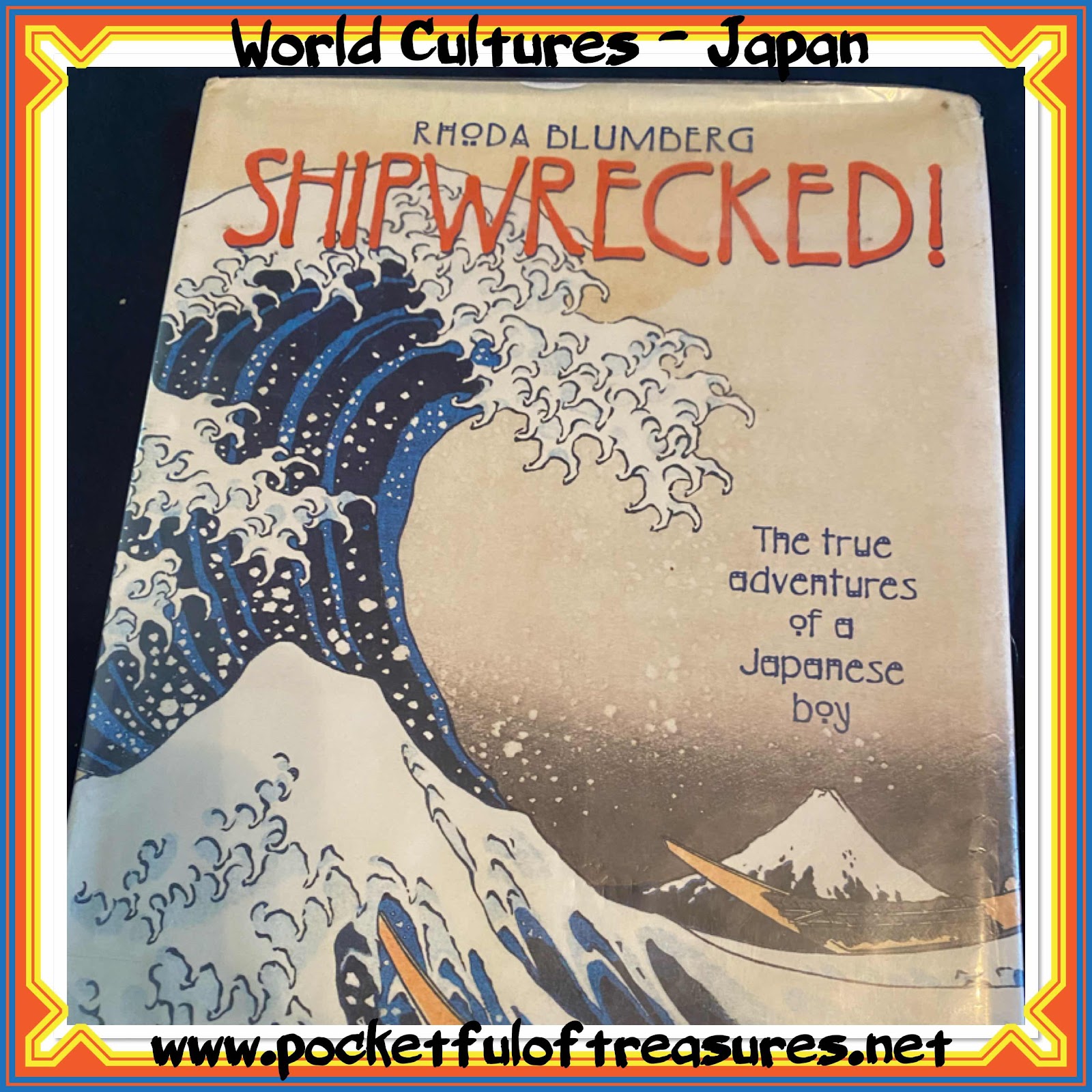 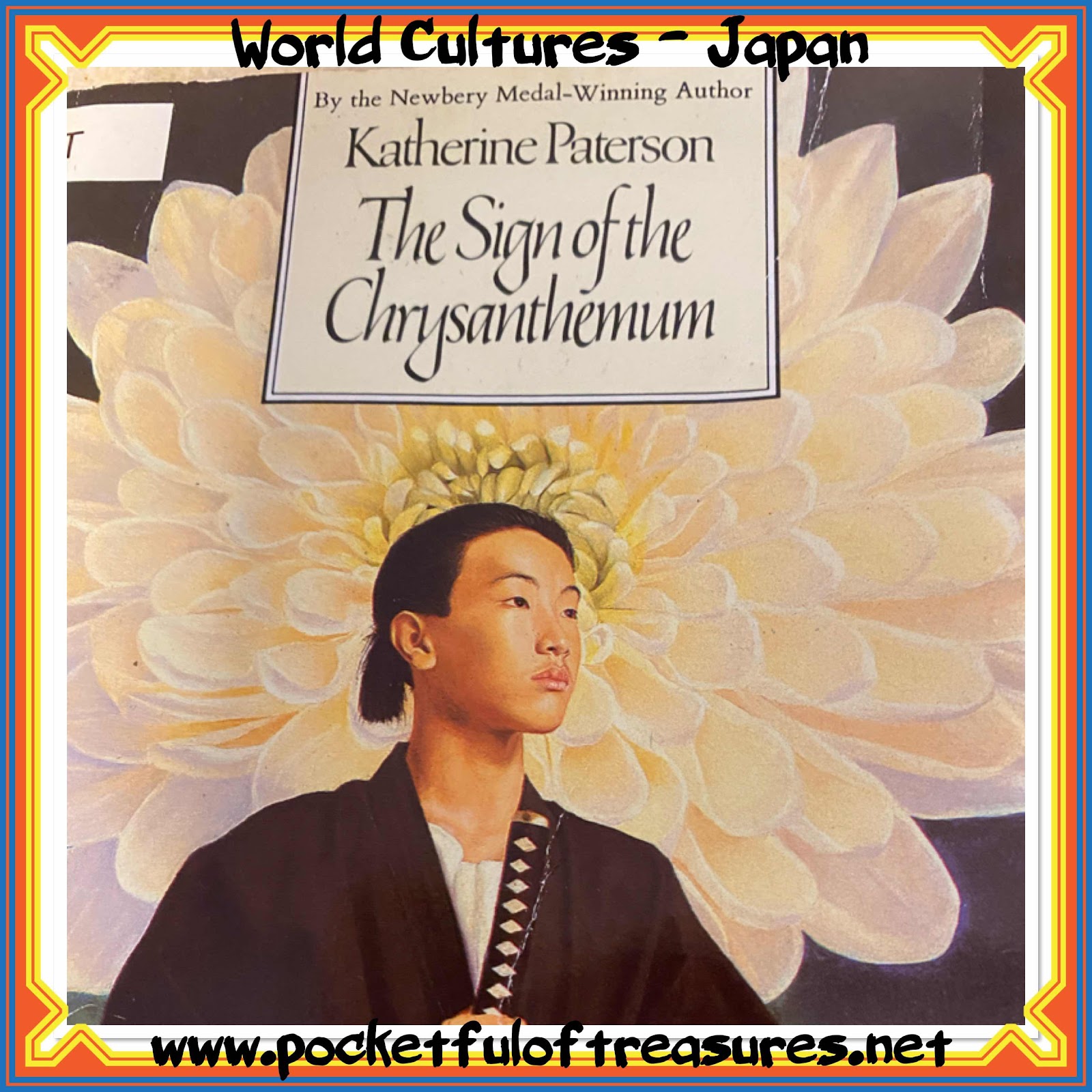 We watched several YouTube videos on Feudal Japan and read the books "The Sign of the Chrysanthemum" and "Shipwrecked!: The True Adventures of a Japanese Boy" for a better understanding of Feudal Japan. 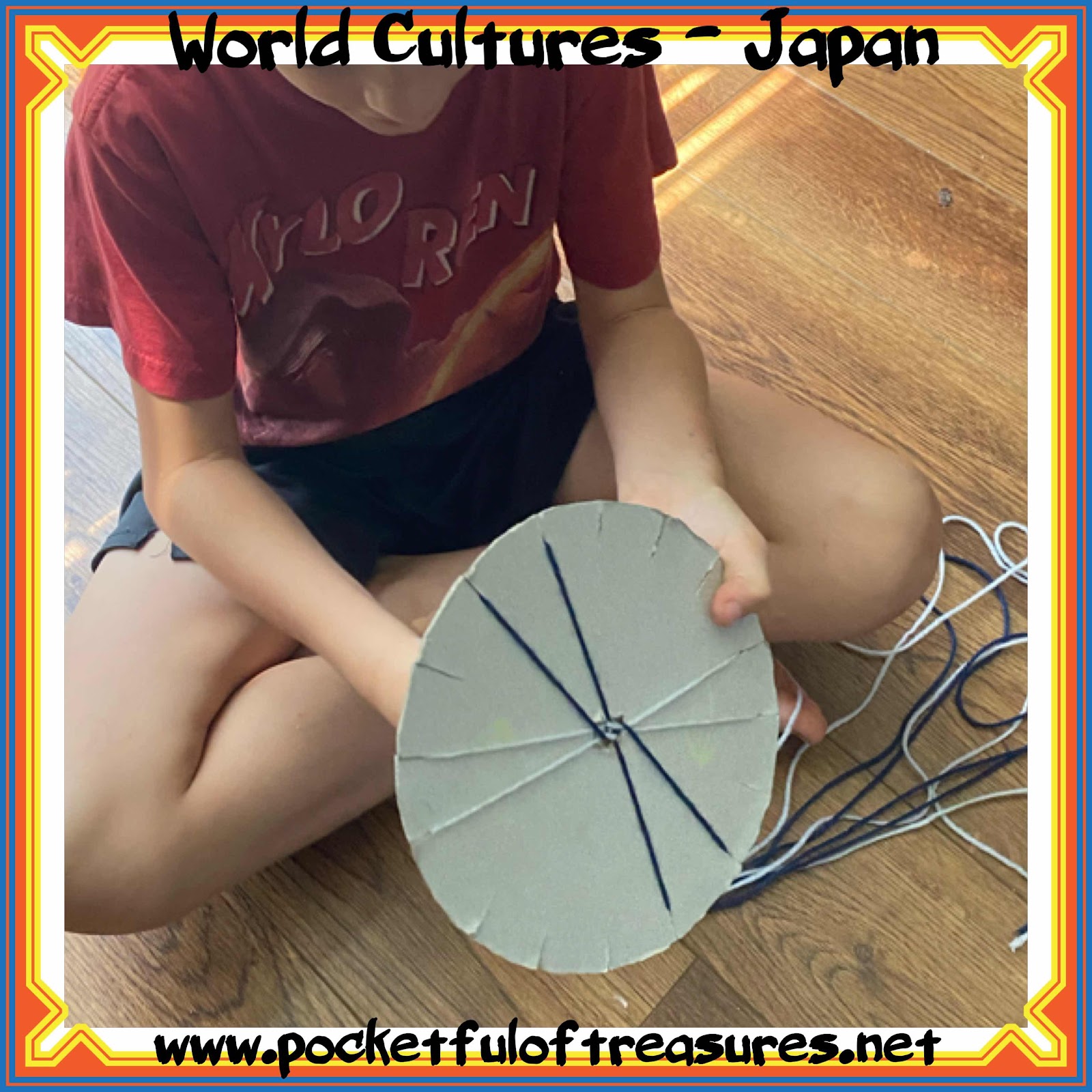 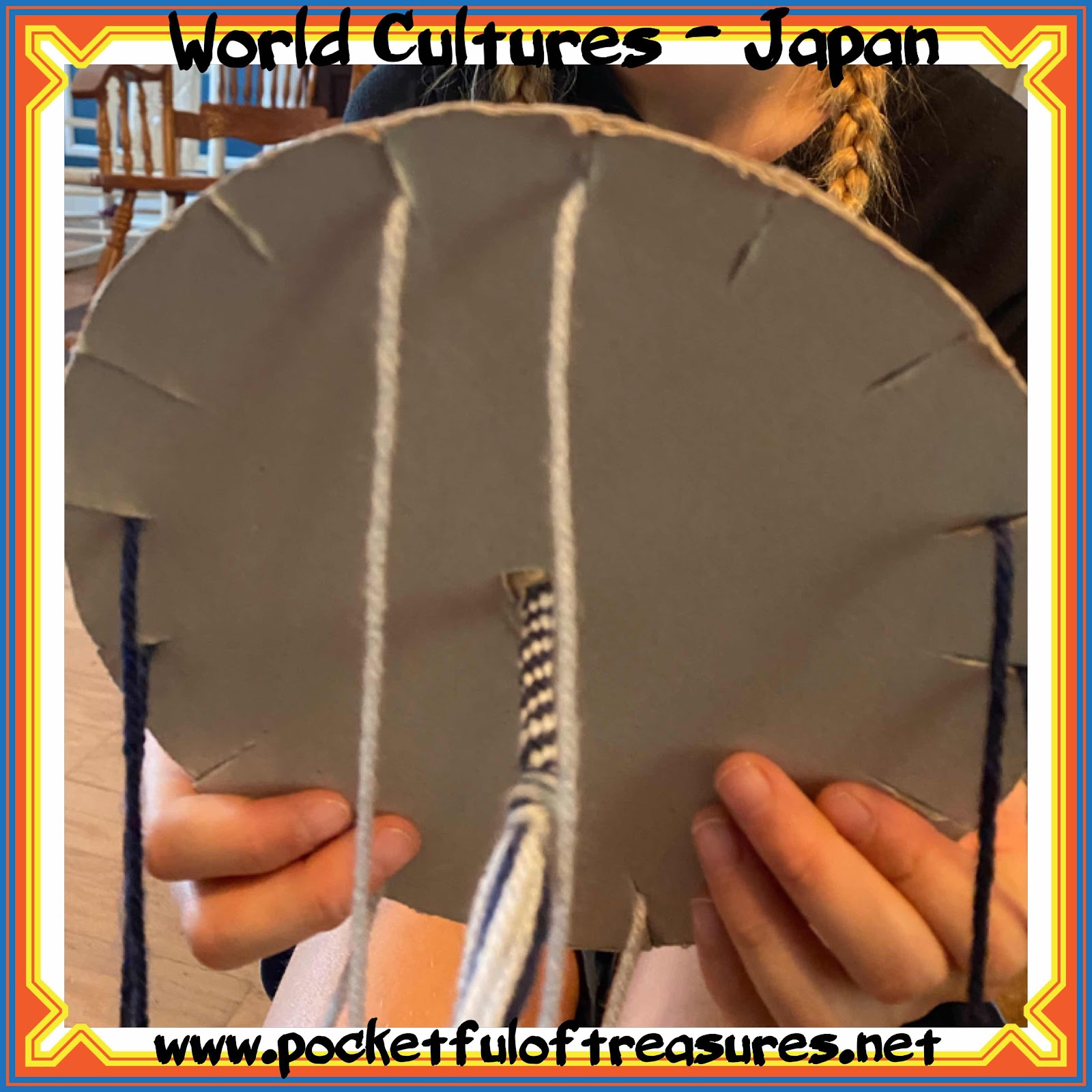 We also braided Kumihimo cords, which is the Japanese Art of Cord Braiding. The Samari once used Kumihimo cords as laces for their armor. You can find many tutorials on YouTube, but we liked this one by a middle school art teacher.

The tutorial was easy to follow and once the kids got the hang of it, they spent many hours braiding (bringing it in the car and to their beds for quiet hour). 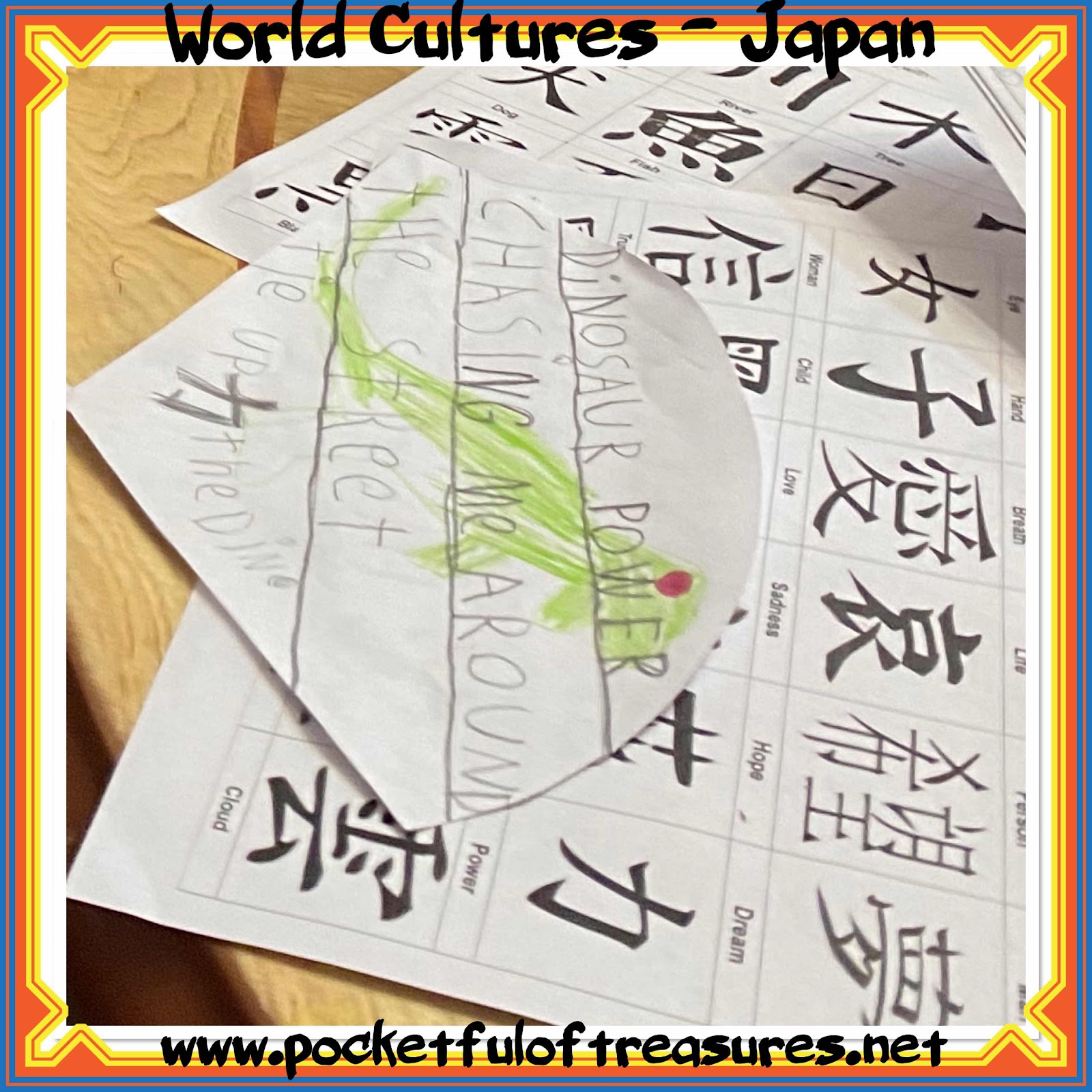 Our next activity explored Japanese writing. I printed out several pages of Kanji, a Japanese writing system where symbols represent words. The kids then chose a Kanji symbol they liked and wrote a Haiku about it. They then drew their Kanji and a picture onto a cardboard fan and wrote their Haiku on it. 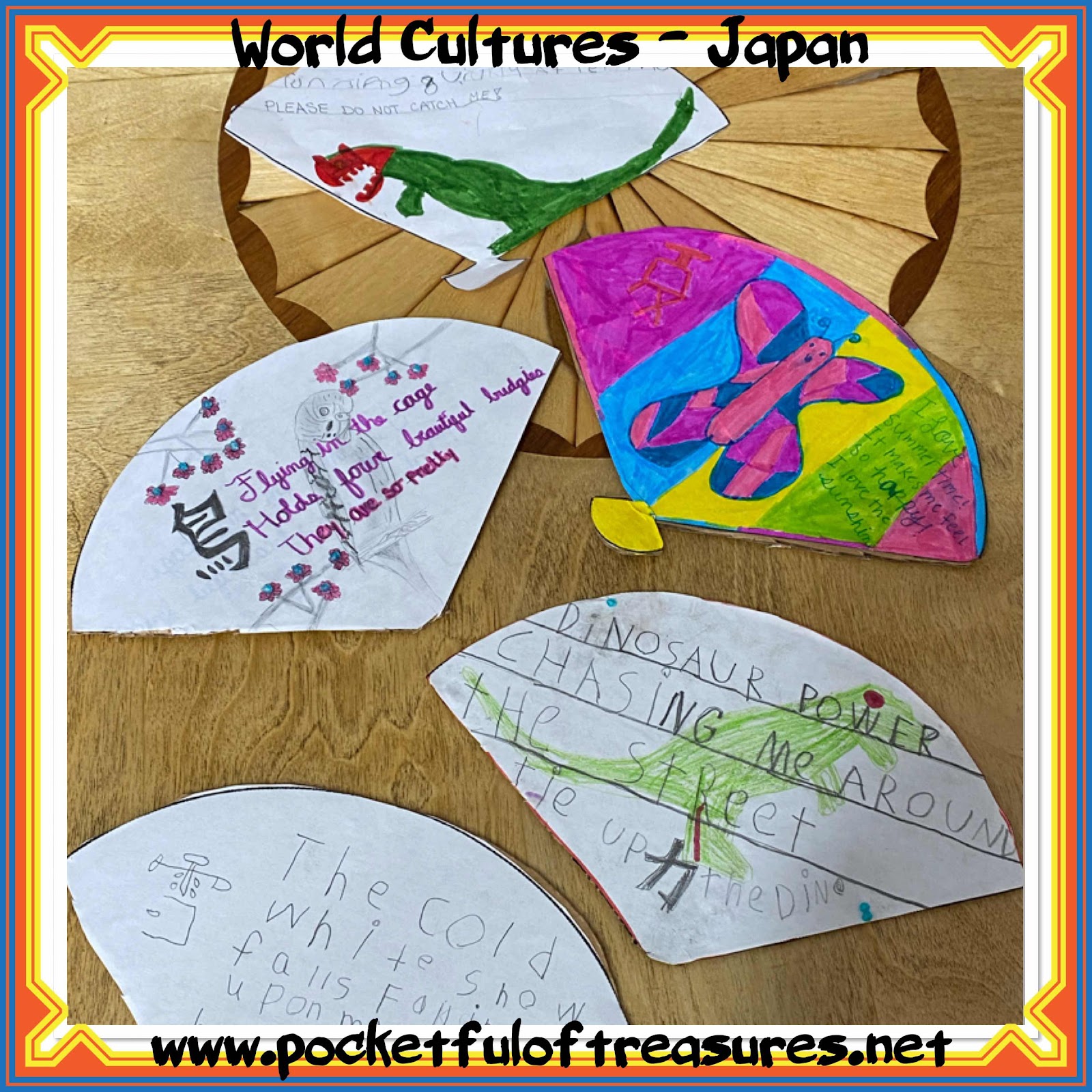 Remember, a Haiku is a three line poem written with a 5/7/5 syllable pattern that is non-rhyming. Here are some of their Haiku's:

Dinosaur running
Running quickly after me
Please do not catch me 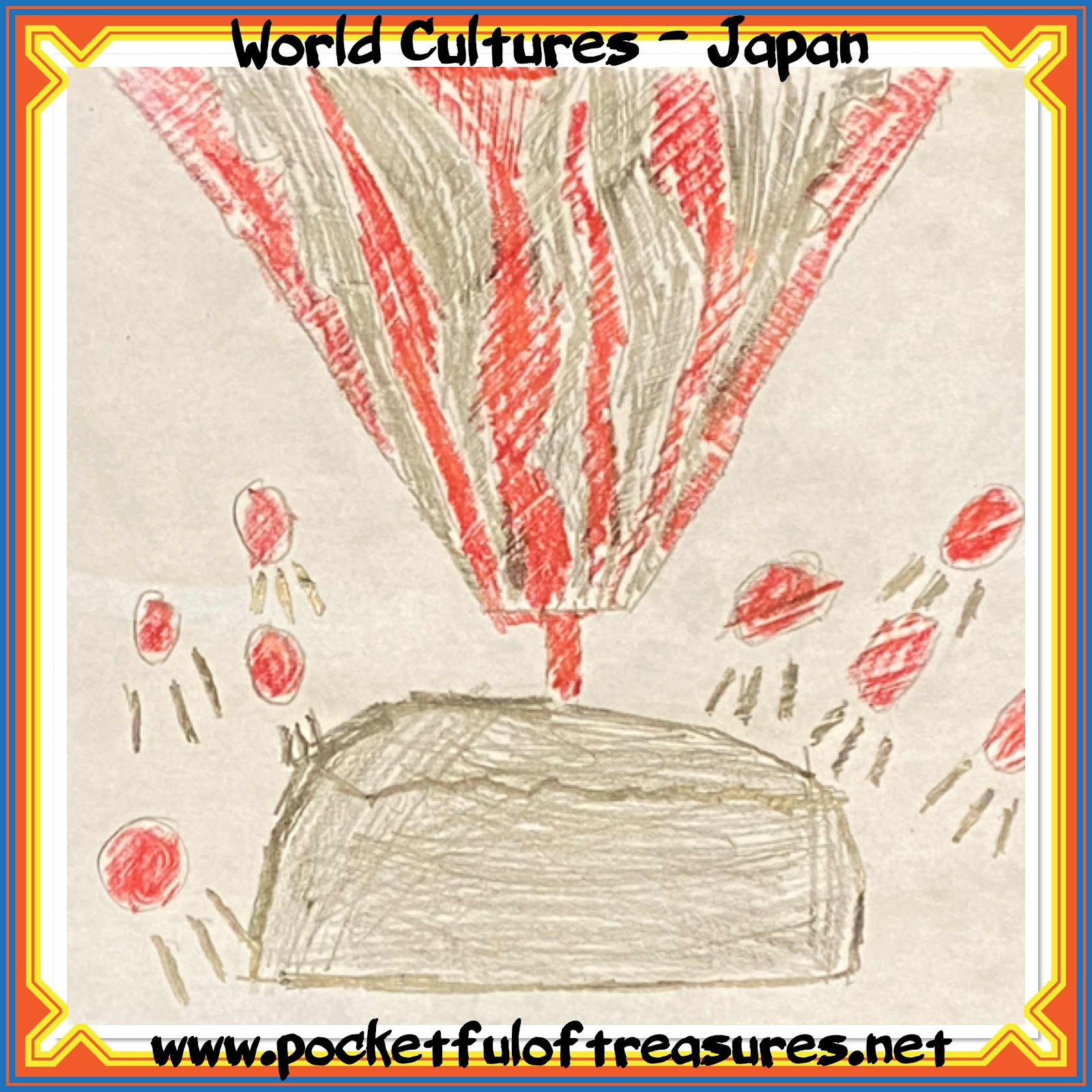 The second week, we focused mostly on the Ring of Fire and the many natural disasters that impact Japan. For this, YouTube was my teaching assistant. I had originally planned on more books, but did not make it to the library on time. Thankfully the internet provides a wealth of resources! 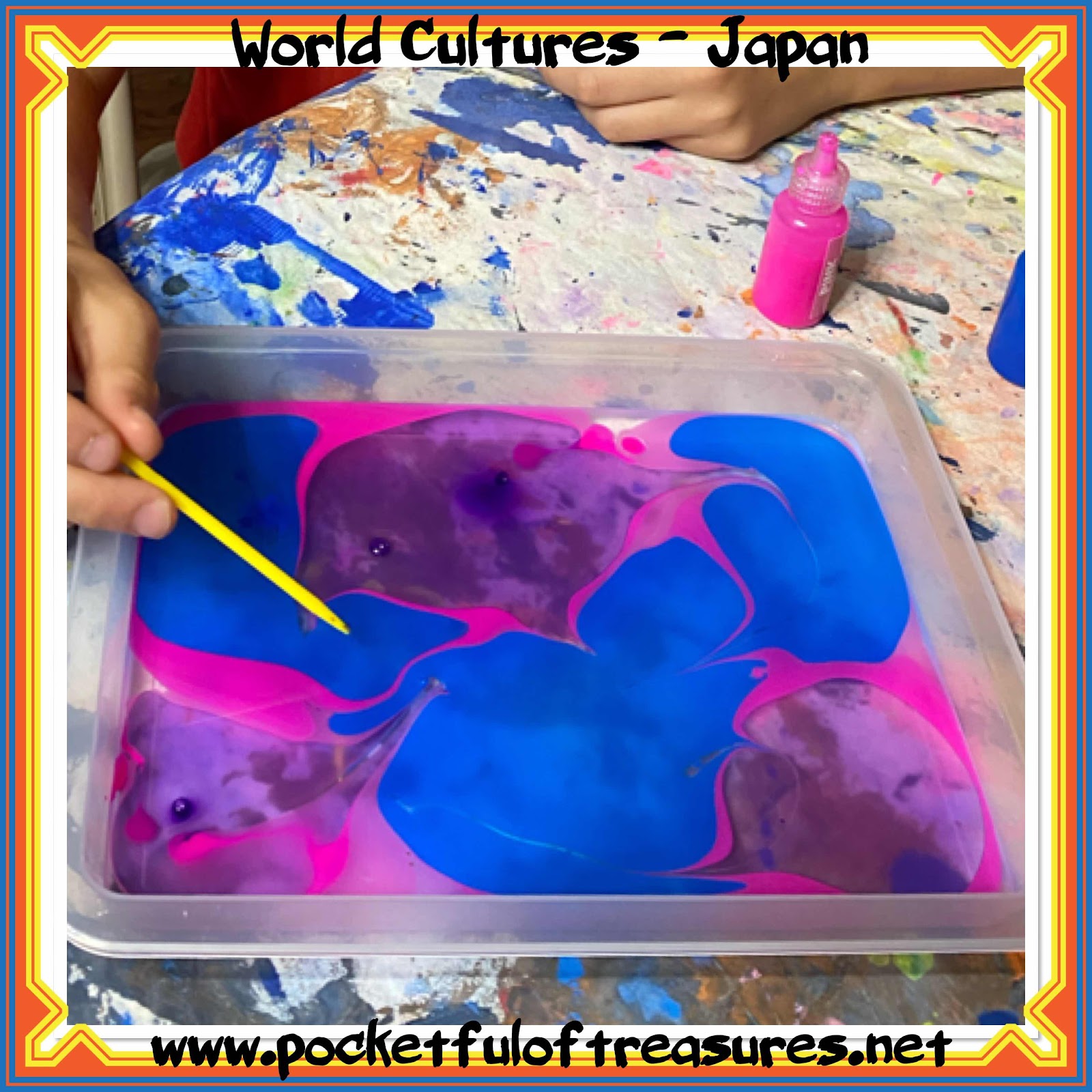 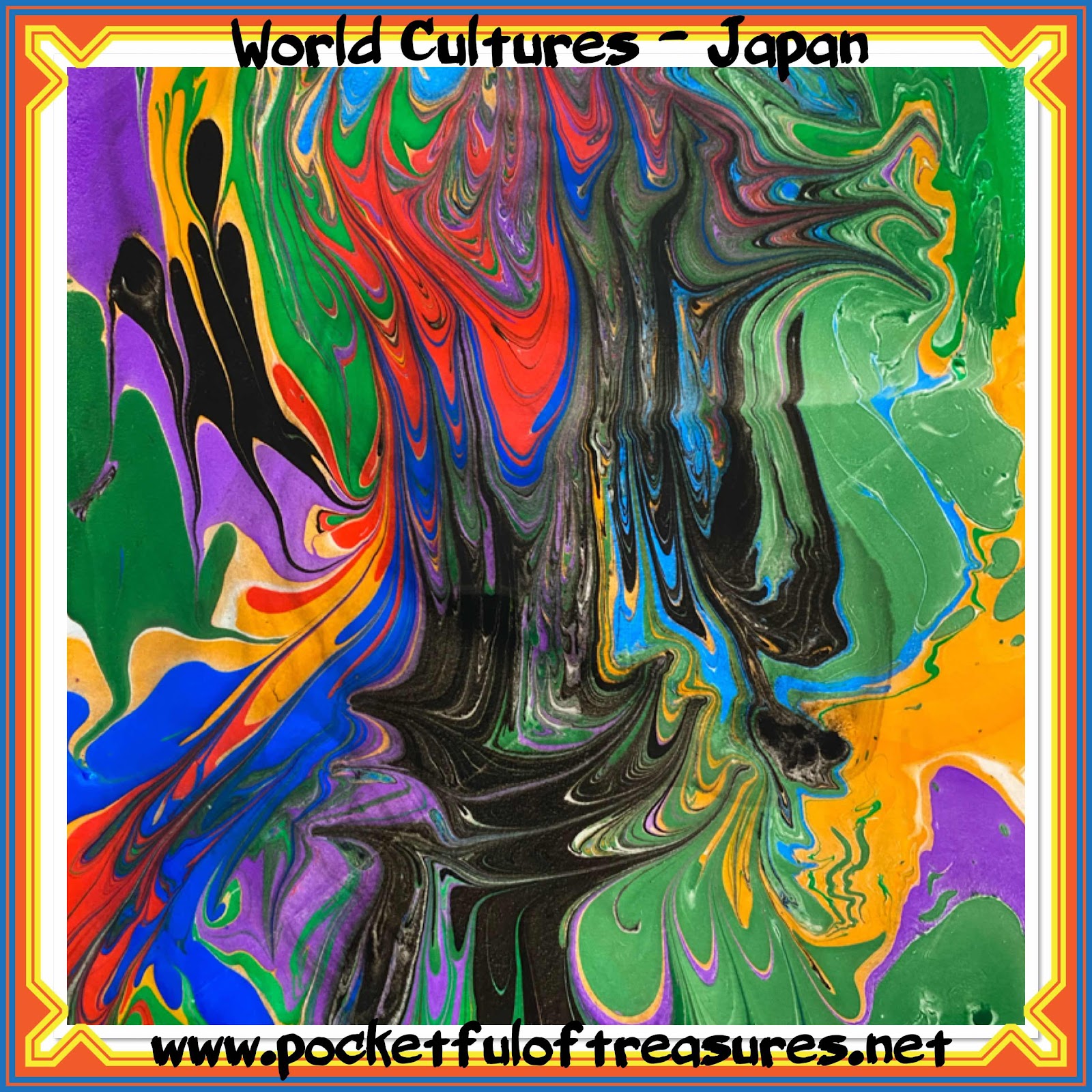 I also wanted to add in another craft for the second week. We have made homemade volcanos many times, so in researching something different to do I came across water marbling (or Suminagashi in Japan). Thanks to Amazon (for which I am an affiliate and I so appreciate your support as it helps me continue to fund our homeschool), I had a Water Marbling kit at my door the following day! This was a big hit with the kids! We also watched some YouTube videos of professional Suminagashi. Quite impressive! 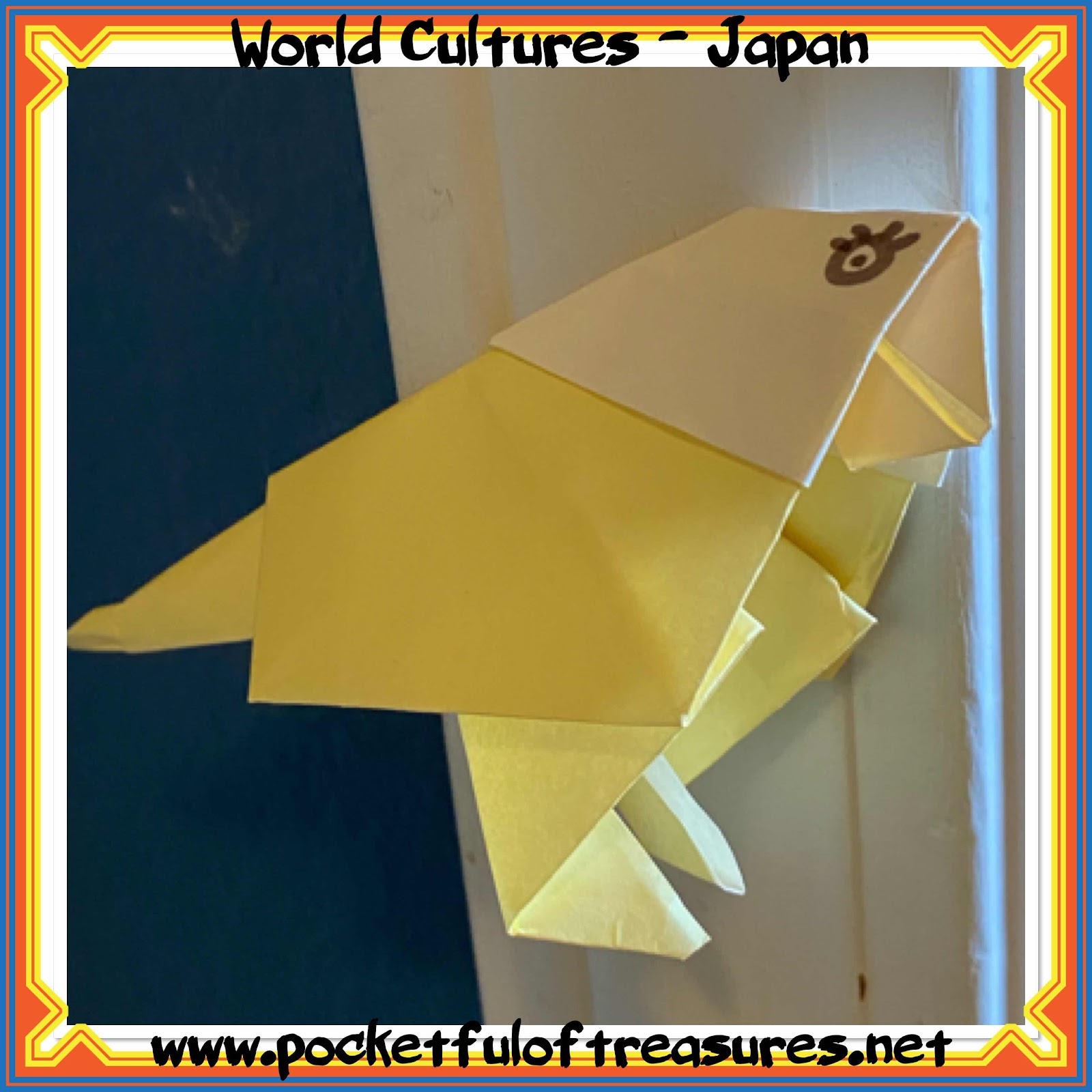 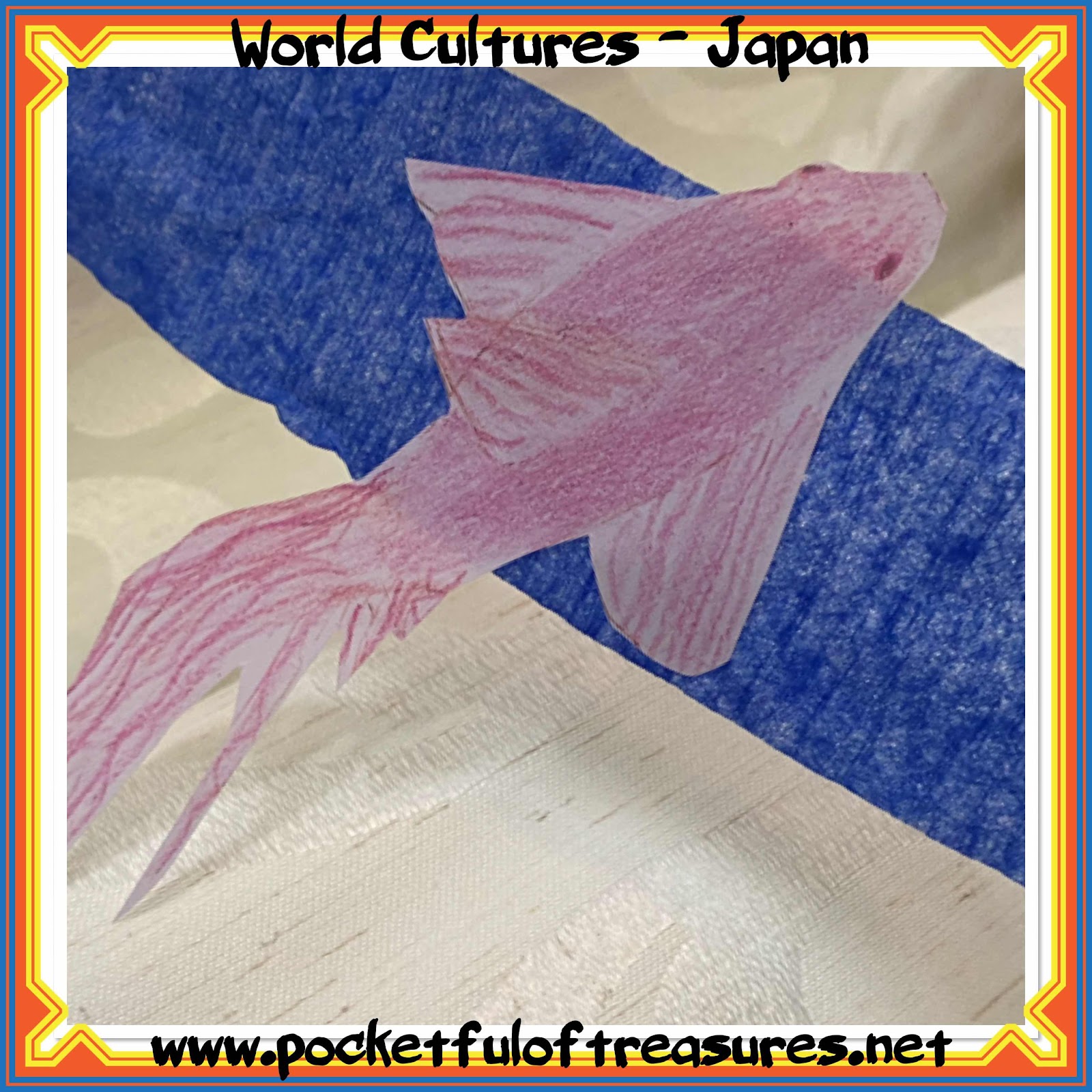 Then it was time to party!!! The children decorated the house with fish drawings and origami. We put a mattress in the middle of the floor which we covered to use as a "table" so we could sit on the floor and each Japanese style. I reminded them of the Japanese table manners which we previously studied. I served Matcha lattes and Cucumber Sushi with some homemade Yum Yum Sauce. 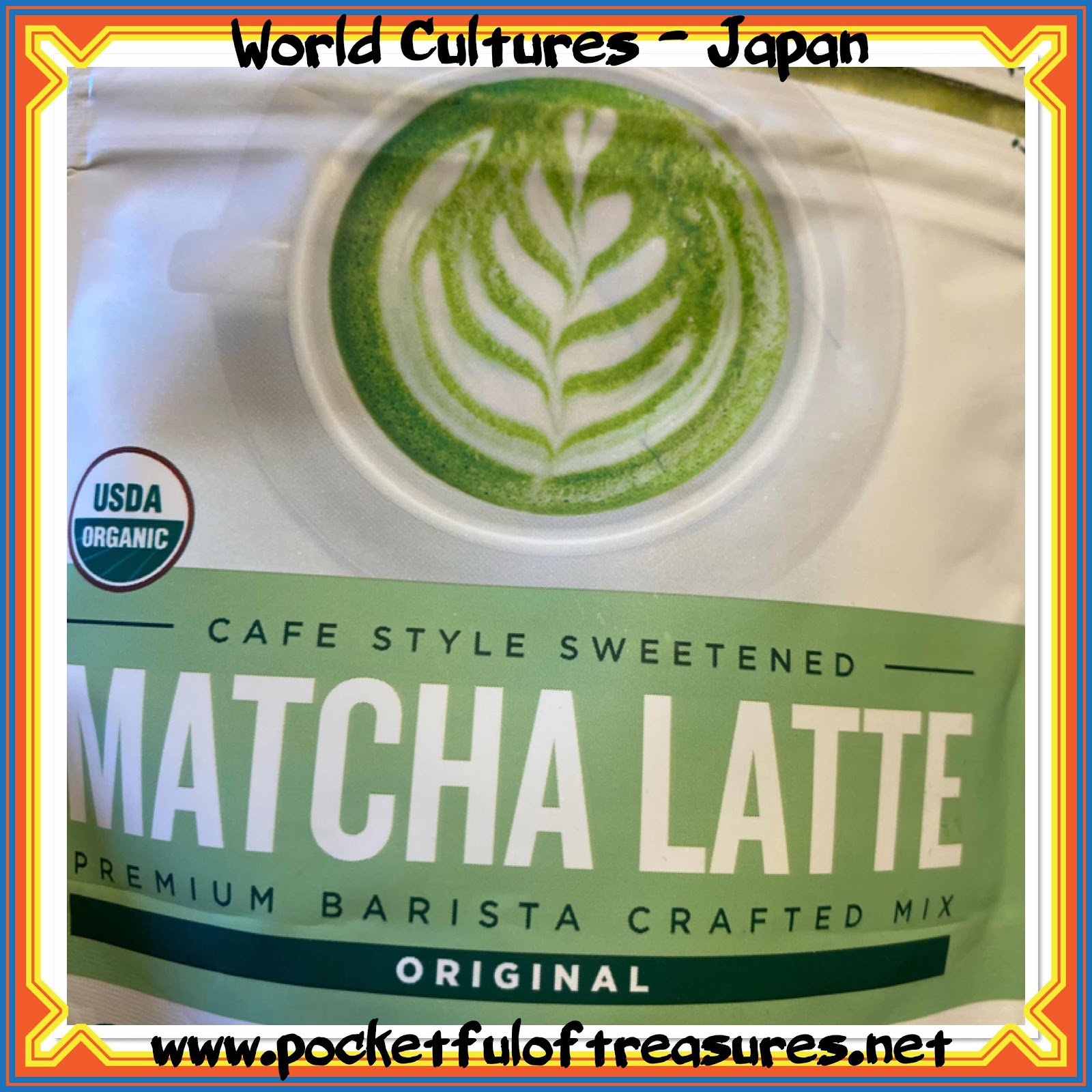 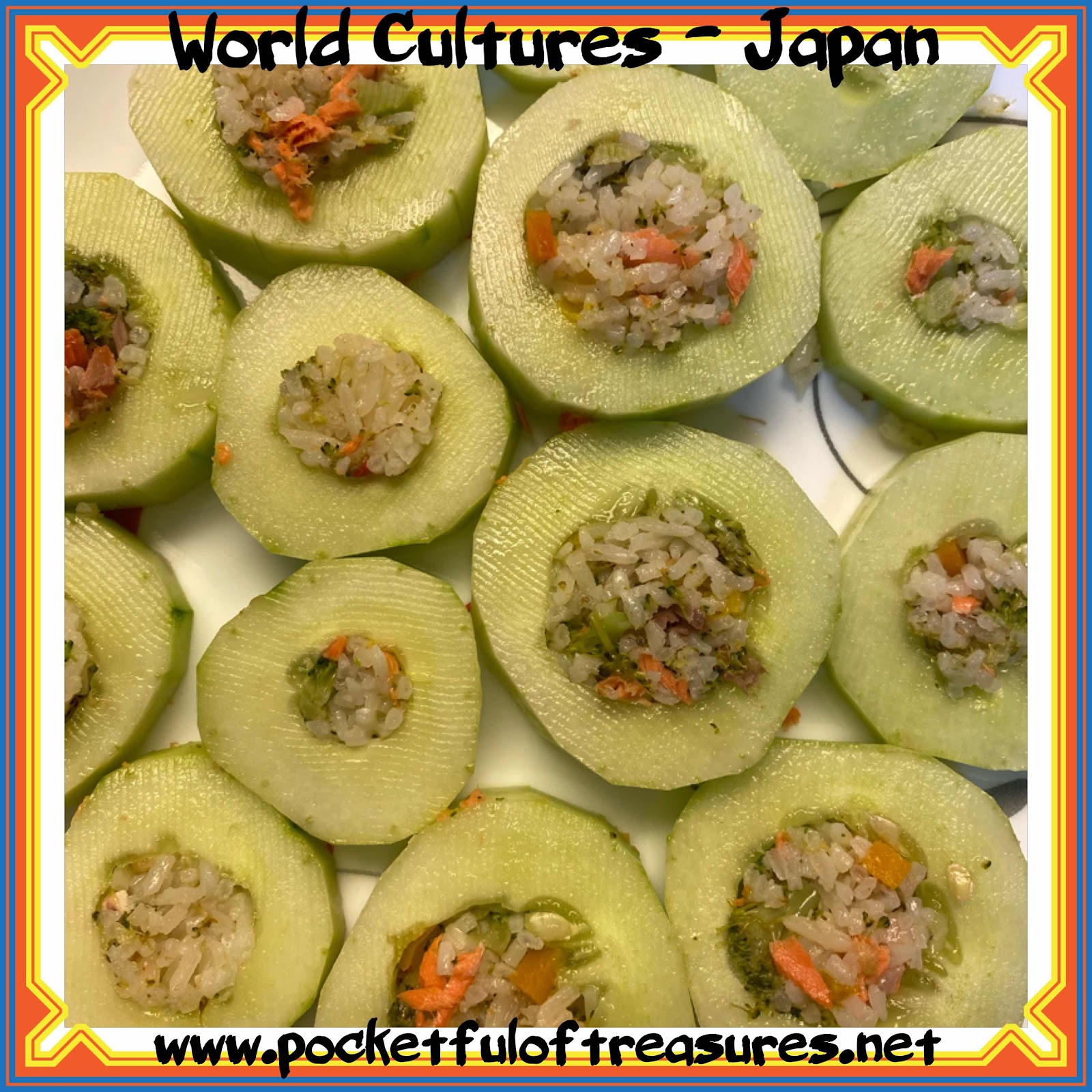 For dessert we made Matcha Pound Cake. 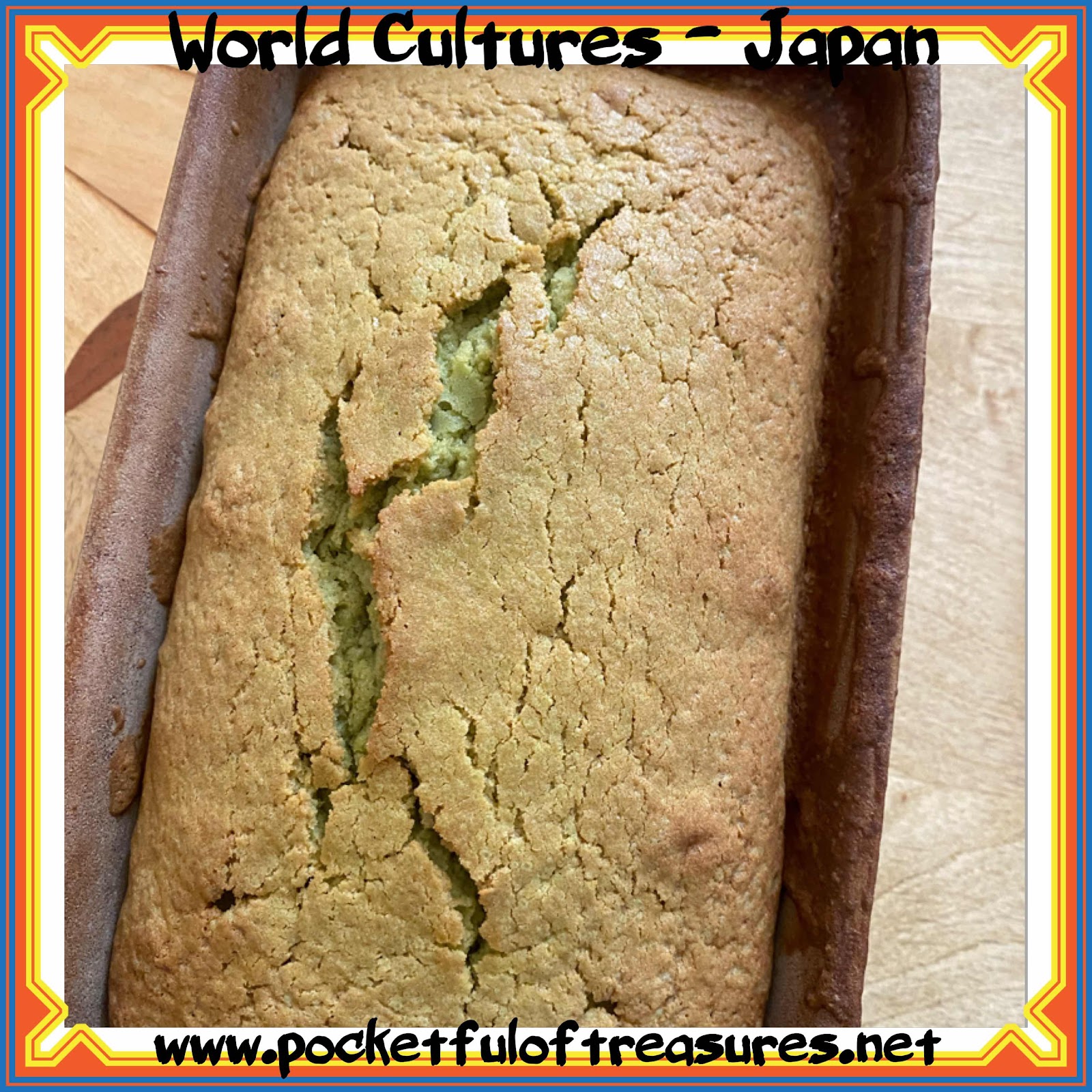 We ate the leftover rice the following day with some potstickers and practiced using our chopsticks. 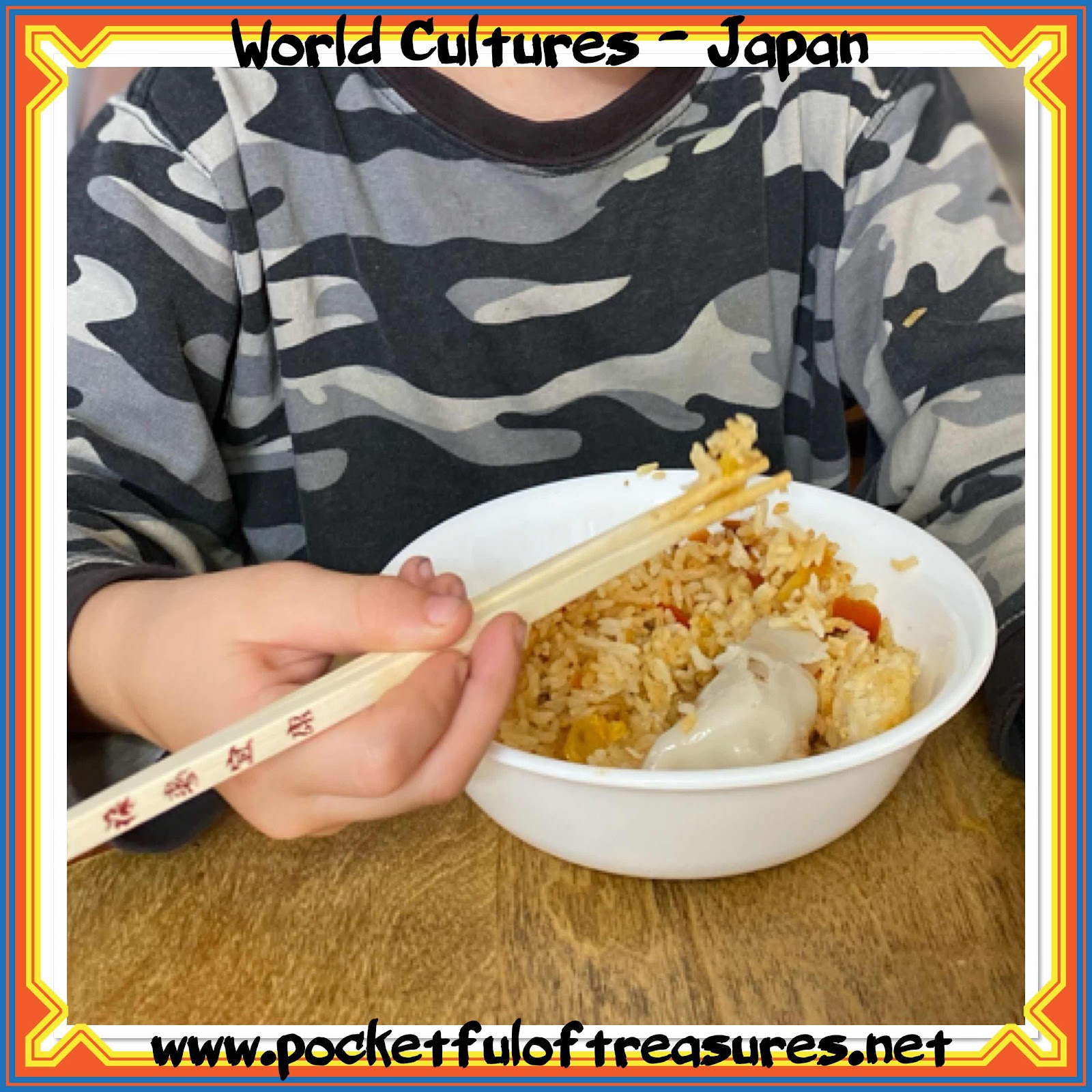 We concluded the night with playing our new favorite game, Go Sushi Go Party! You can play with up to eight players, so our whole family was even to play. Even our four year old (even though he did not grasp the strategy of the game) was able to put down cards and be a part of family night. (If you find the directions confusing, which I did at first, watch a YouTube tutorial on game play. It is really quite a simple game once you understand how to play). 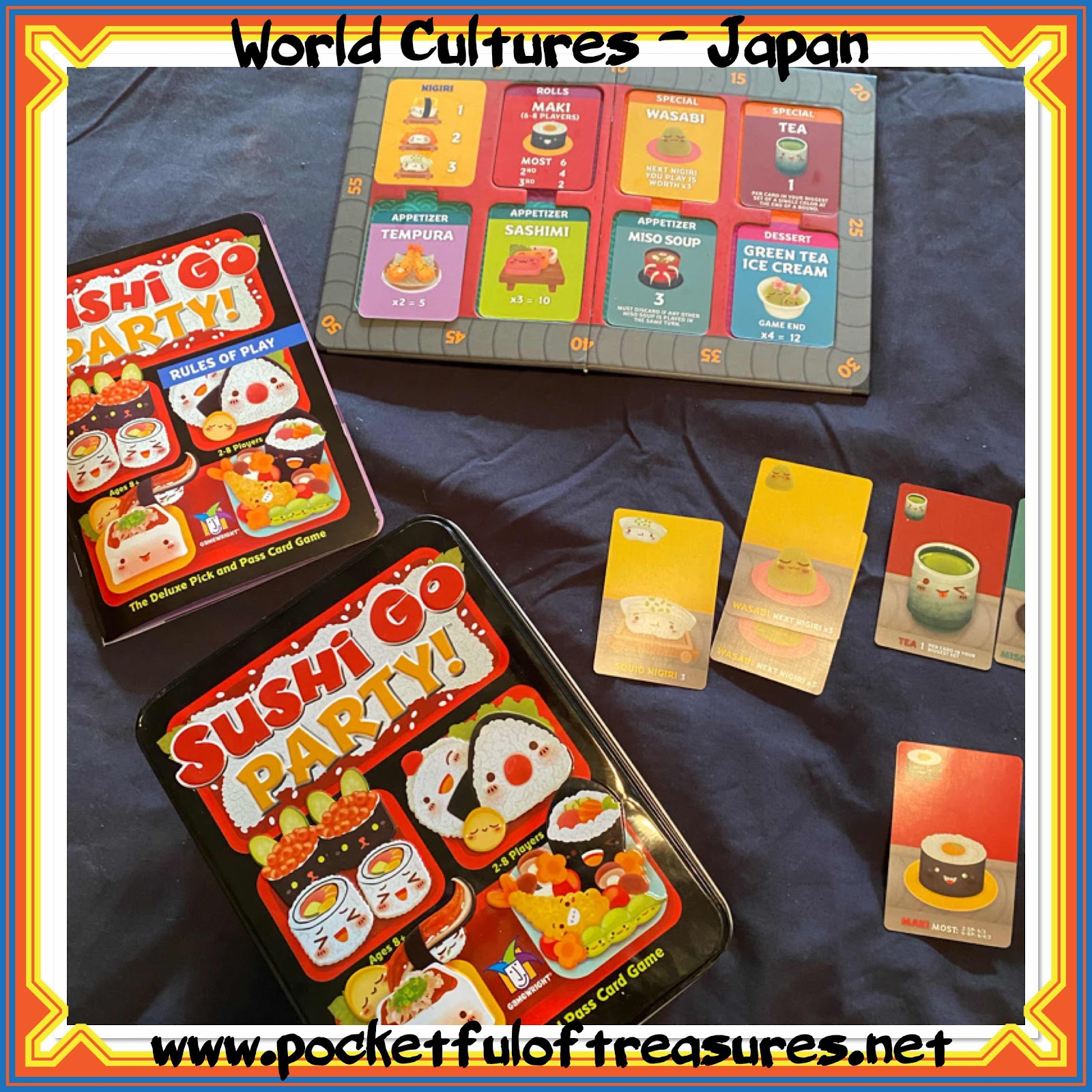 Thank you so much for stopping by! Be sure to follow our Instagram @pocketful_of_treasure for our latest homeschool fun and tag us in your adventures.

***Pocketful of Treasures is a participant in the Amazon Services LLC Associates Program, and affiliate advertising program designed to provide a means for sites to earn advertising fees by advertising and linking to Amazon.com***