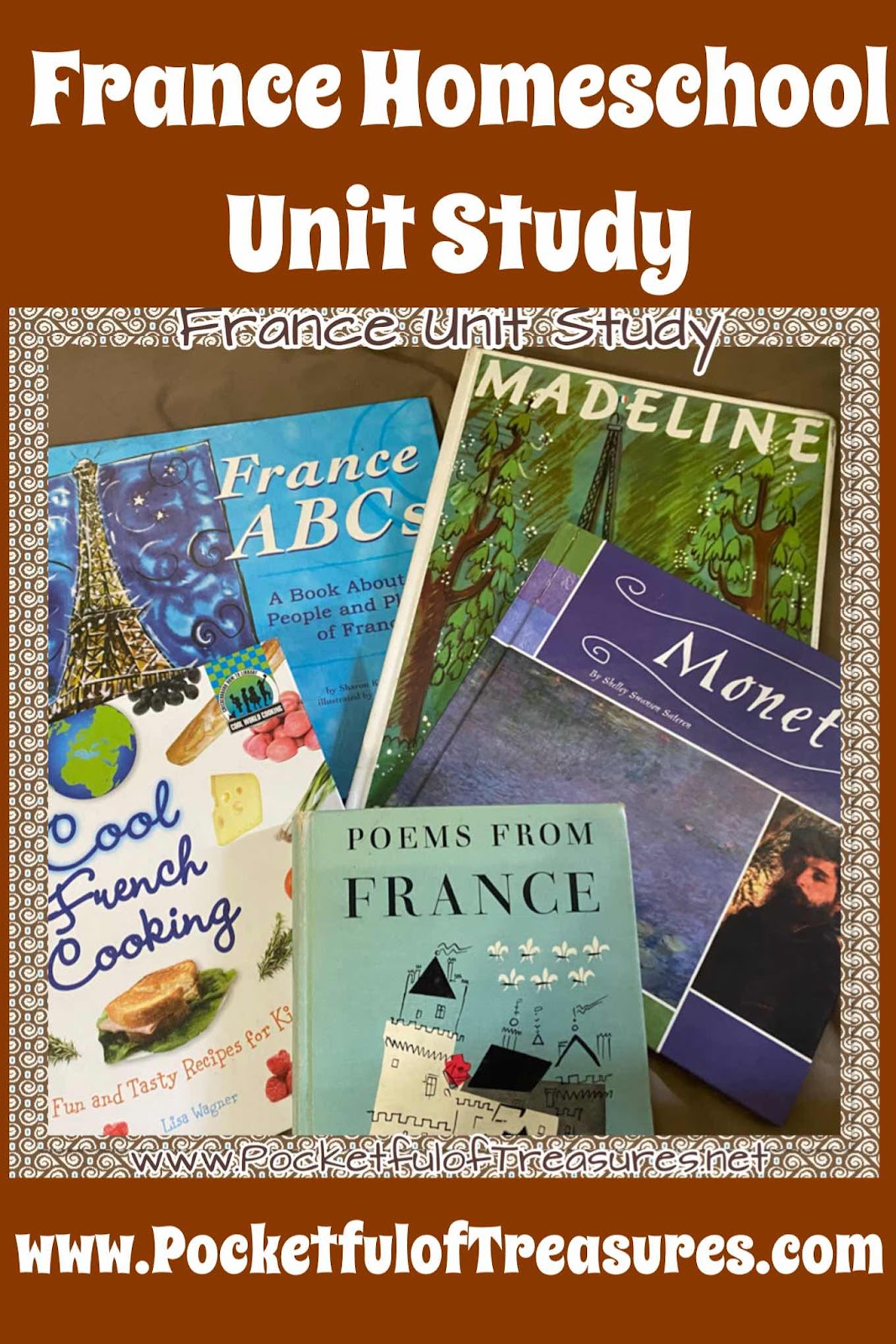 Bonjour! Our latest world cultures unit study took us to France. The kids remembered quite a bit about France from our study of World War II last year. We had read the novel Twenty and Ten and The Journey that Saved Curious George and studied European geography, so they had no problem finding France on the map. Our "visit" to France this year, however, was much brighter and focused on the intricate architecture, famous monuments, high end fashion, delicious foods, and influential artist and writers. 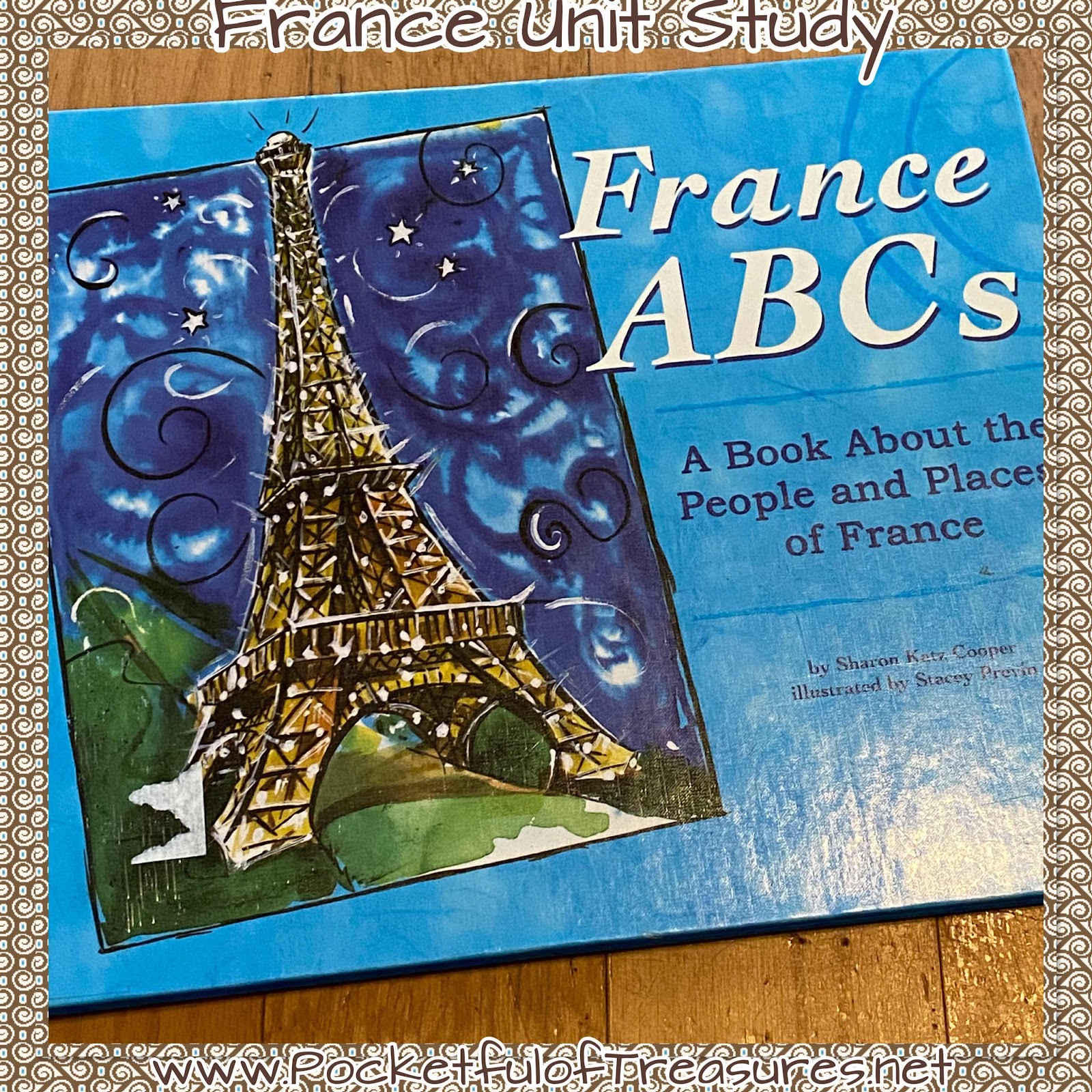 France ABCs: A Book About the People and Places of France was a fun, quick little read that gave an overview of the culture of France. 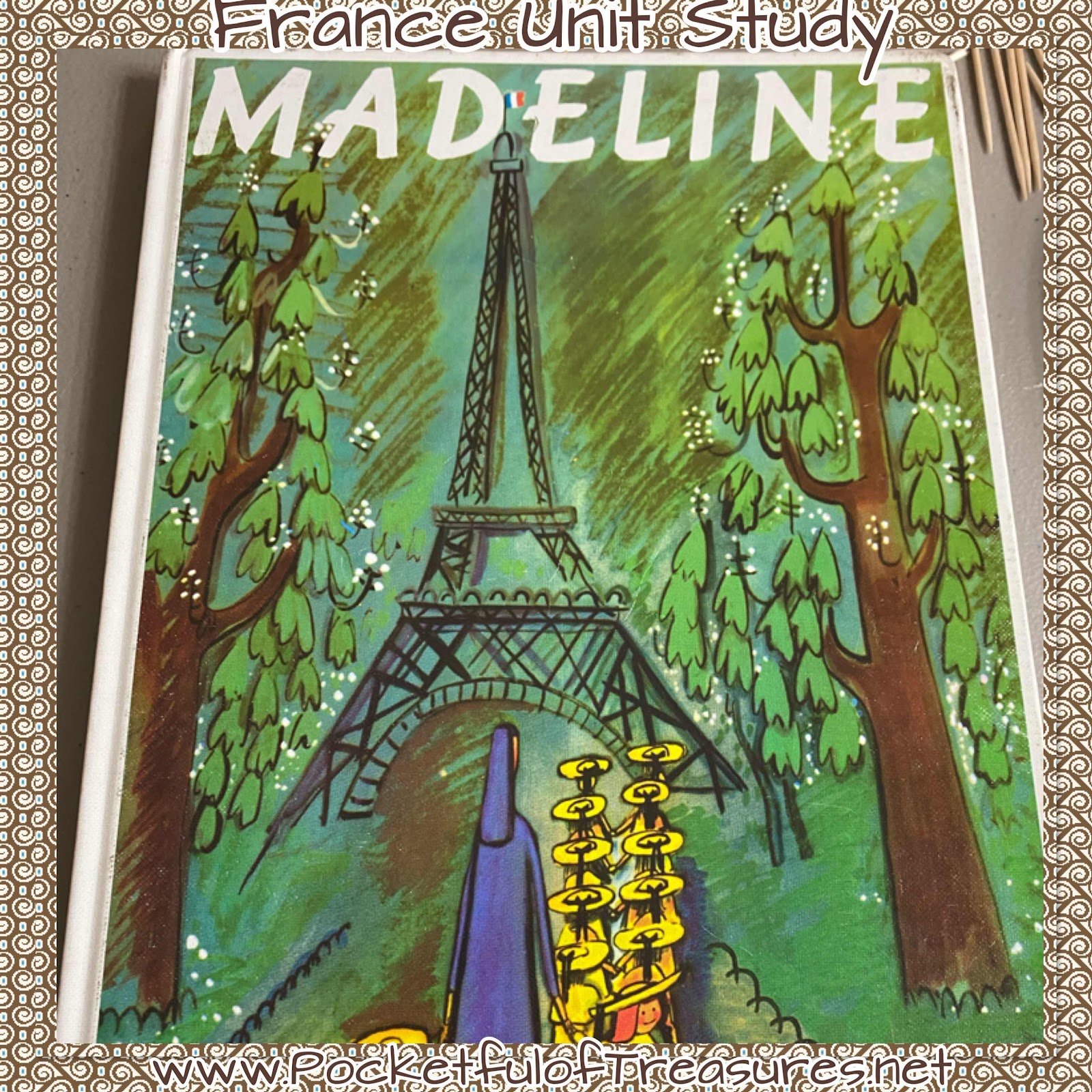 We then read Madeline and later watched the movie. Not only is a an entertaining children's book, but the illustrations take you on a quick tour of some of the famous Paris scenes, including the Eiffel Tower, the Opera, the Palace Vendome, the Louvre, and more. 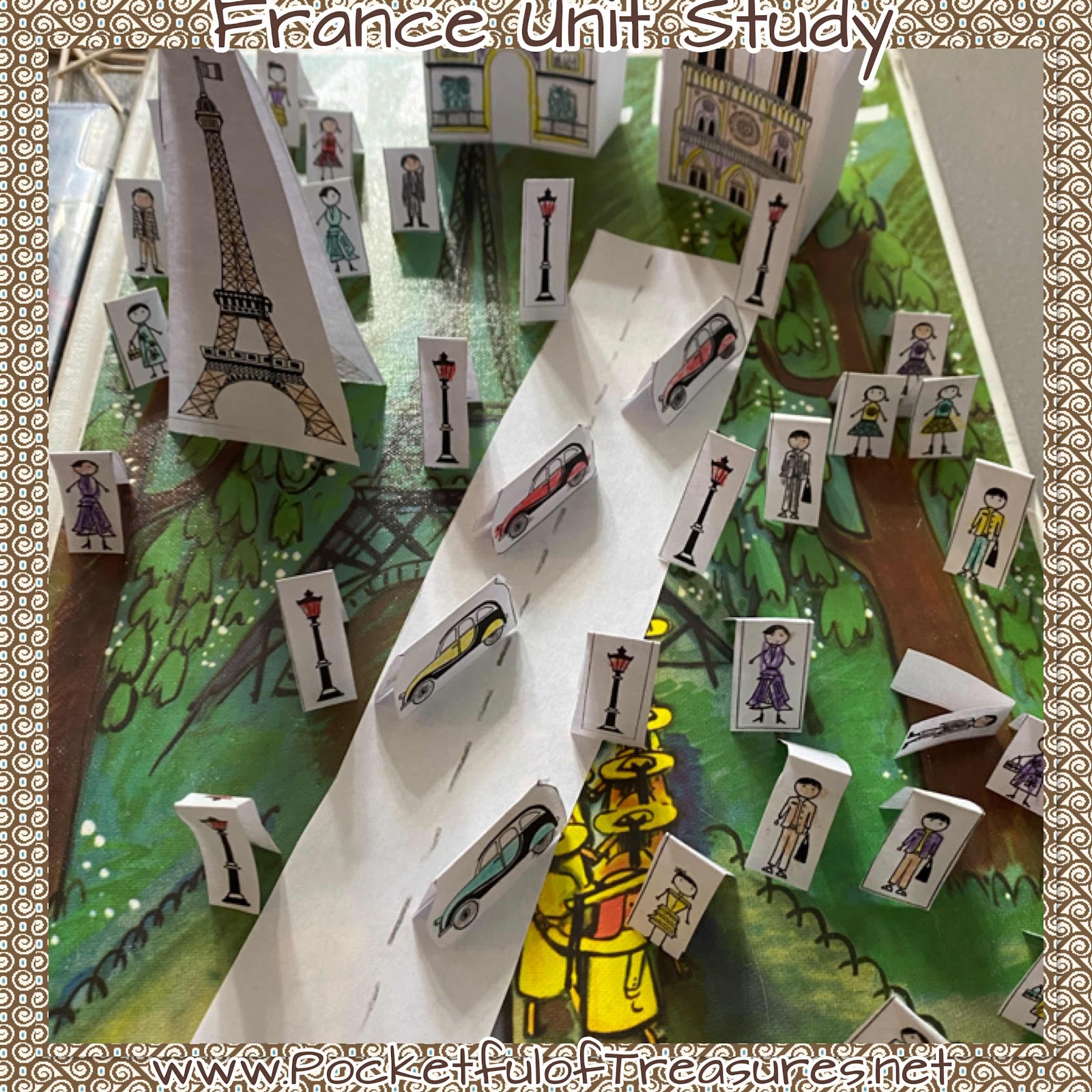 Using the Made by Joel Paris Paper City, the kids explored Paris. They had fun with these paper cutouts. 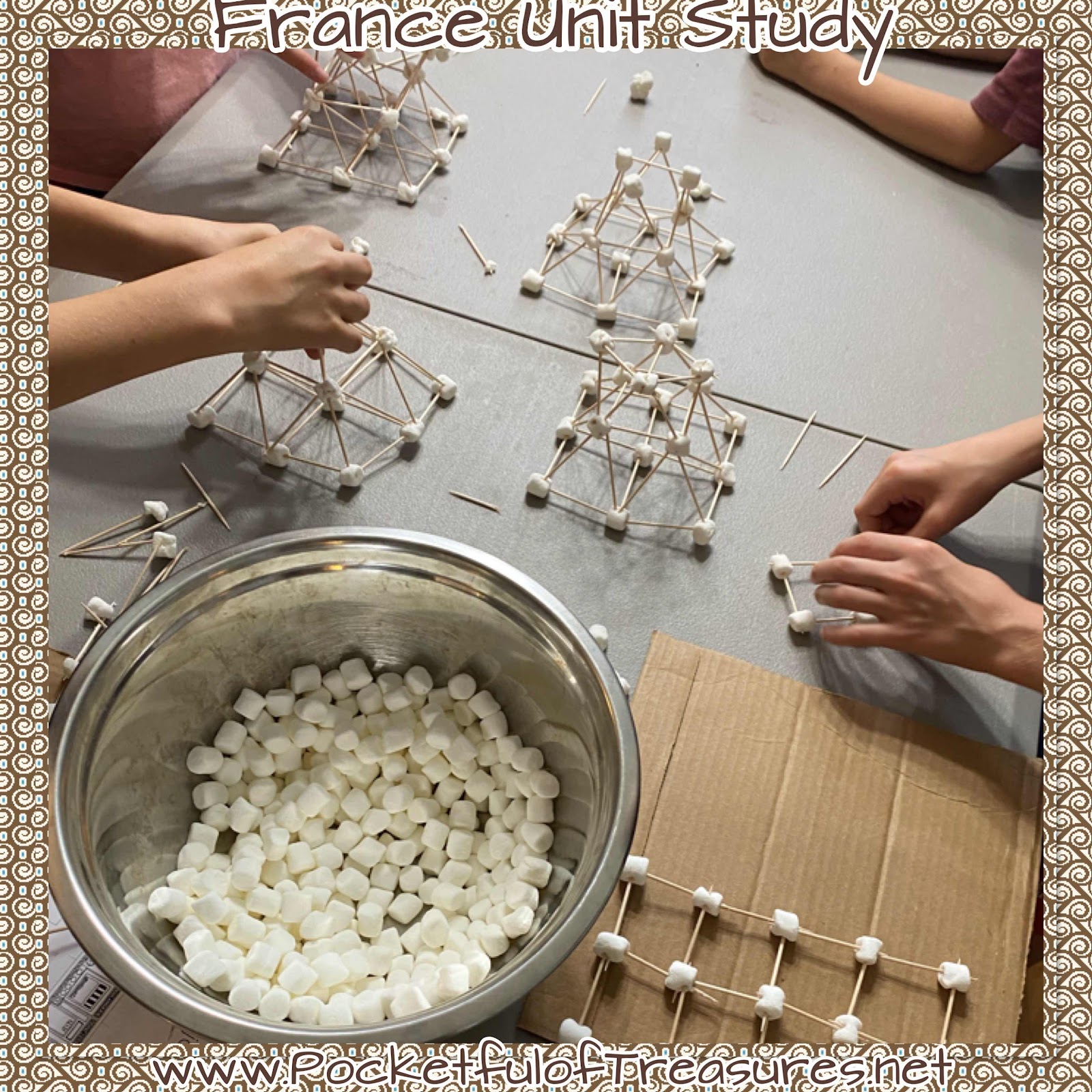 I did our STEM activity a little differently for France. In the past (like our windmills for the Netherlands), I have always had each of the kids work individually. For this STEM project, they had to work together. They were tasked with building the Eiffel Tower out of marshmallows and toothpicks. They soon discovered that working together was the hardest part of the entire project. Each child had his or her own opinions on how things should be done. 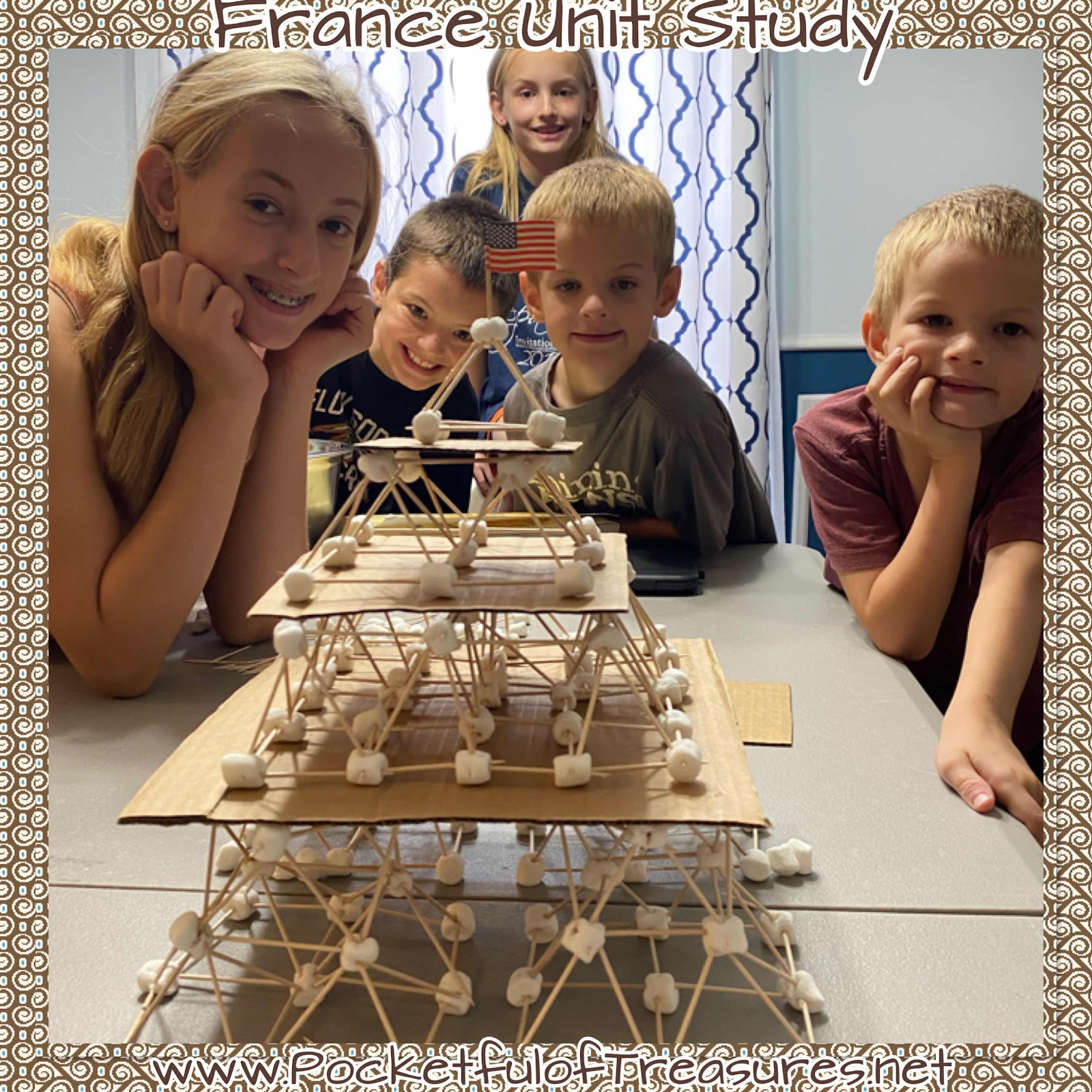 It took most of the morning to resolve differences, delegate roles and responsibilities, and carry out their plan, but they persevered. In the end they decided that it should be named Baker Tower since it did not quite resemble the Eiffel Tower and topped their tower off with an American flag. 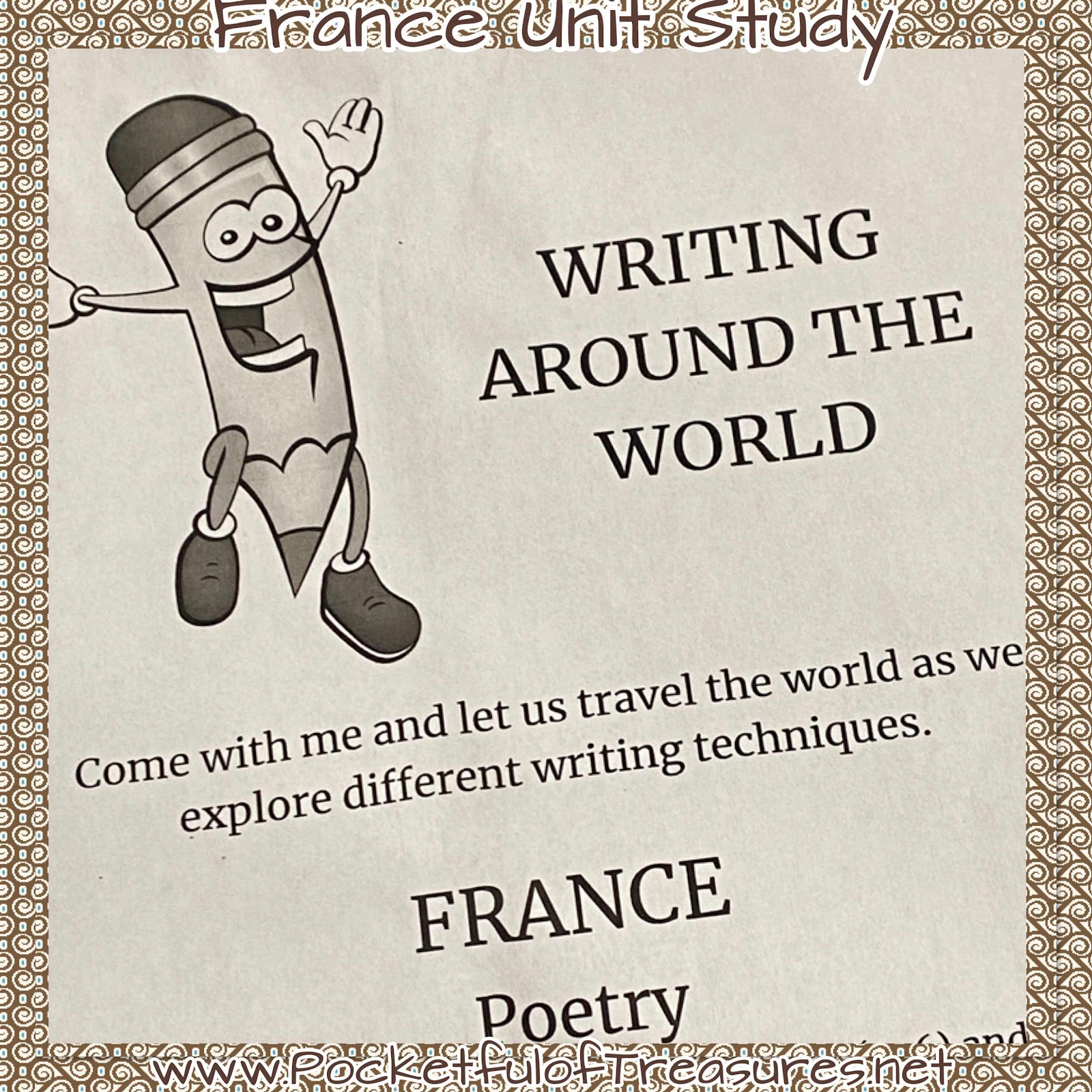 France's Writing Around the World assignment focused on ABAB poetry. Sully Prudhomme was awarded the very first Literature Nobel Peace Prize in 1901. After studying his poem "At the Water's Edge", the older kids wrote their own ABAB poem. Our younger writers filled in a rhyming poem about France, and the little ones matched rhyming words. 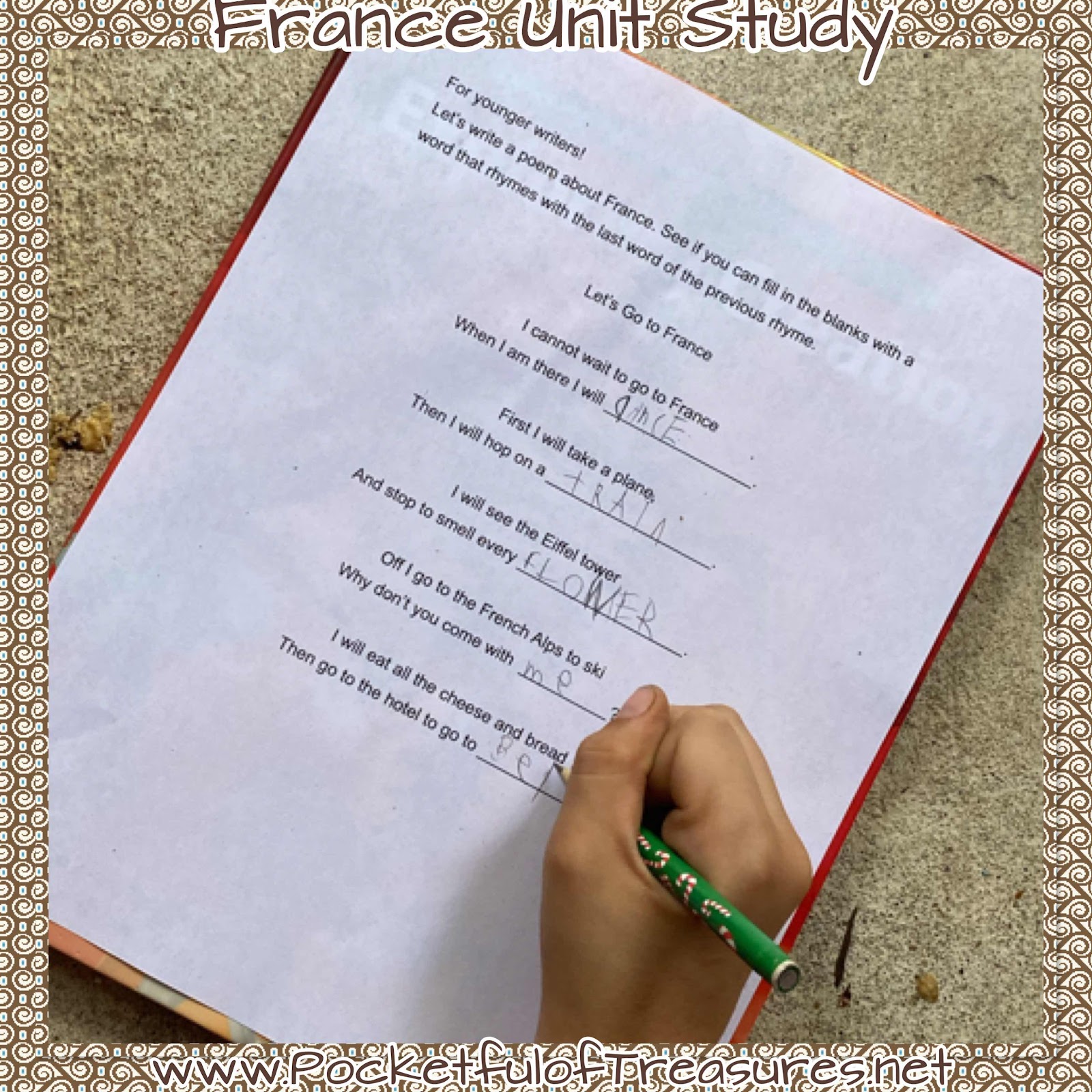 As always, you can download the Writing Around the World assignment from Teachers Pay Teachers for free on the week this blog post is released. You can download anytime after that for a small fee which helps me continue to stay home and create homeschooling resources. Each Writing Around the World assignment includes activities for different levels of writers, so all your children can participate in the assignment together. 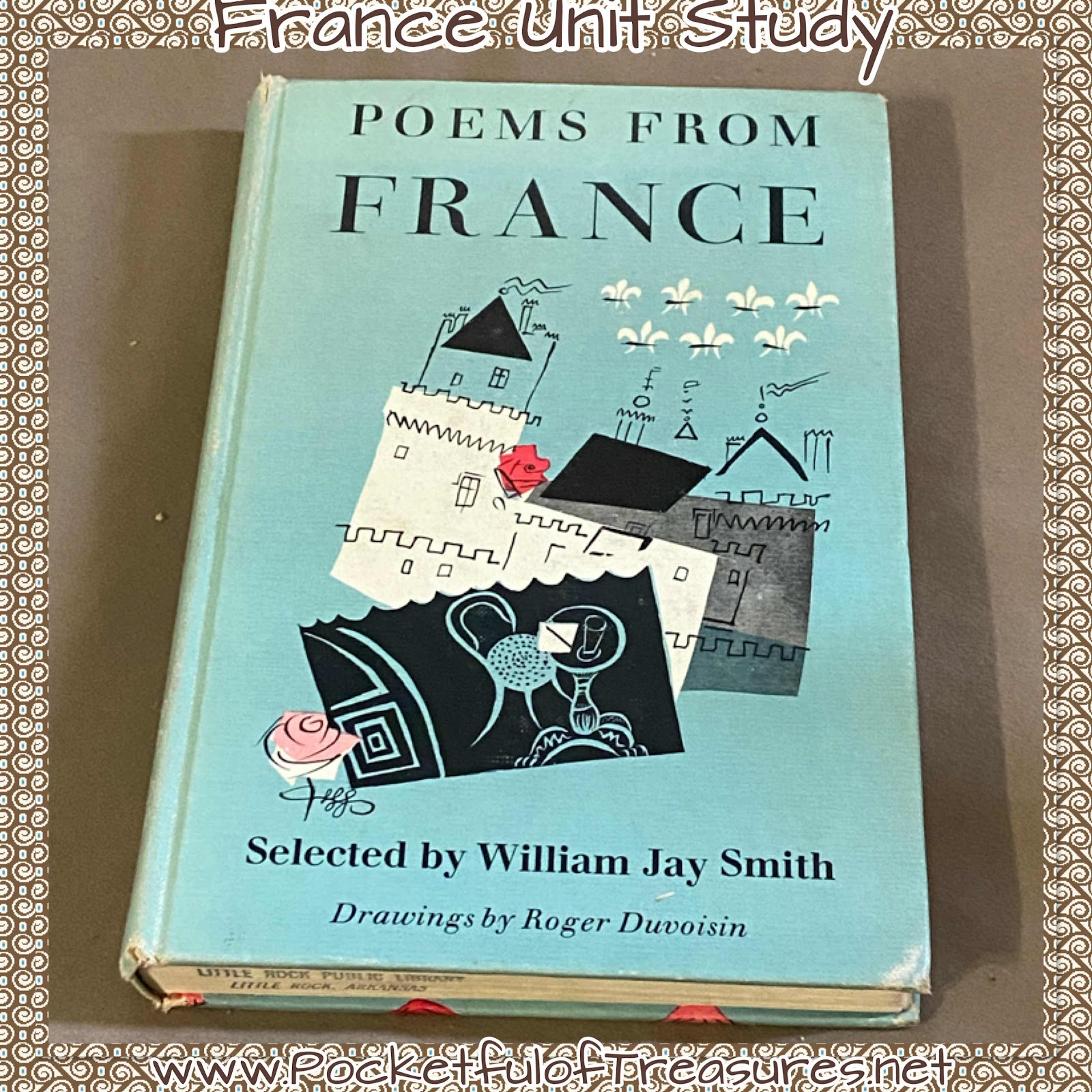 We also found a collection of poems at the library in a book called Poems from France. We enjoyed selecting and reading a few poems each mealtime. Because these poems are written in French and translated to English, the rhyming pattern is often lost. The book contains the poems side by side in French and English, so even though we do not know French we could often find the rhyming pattern by looking at the French words. 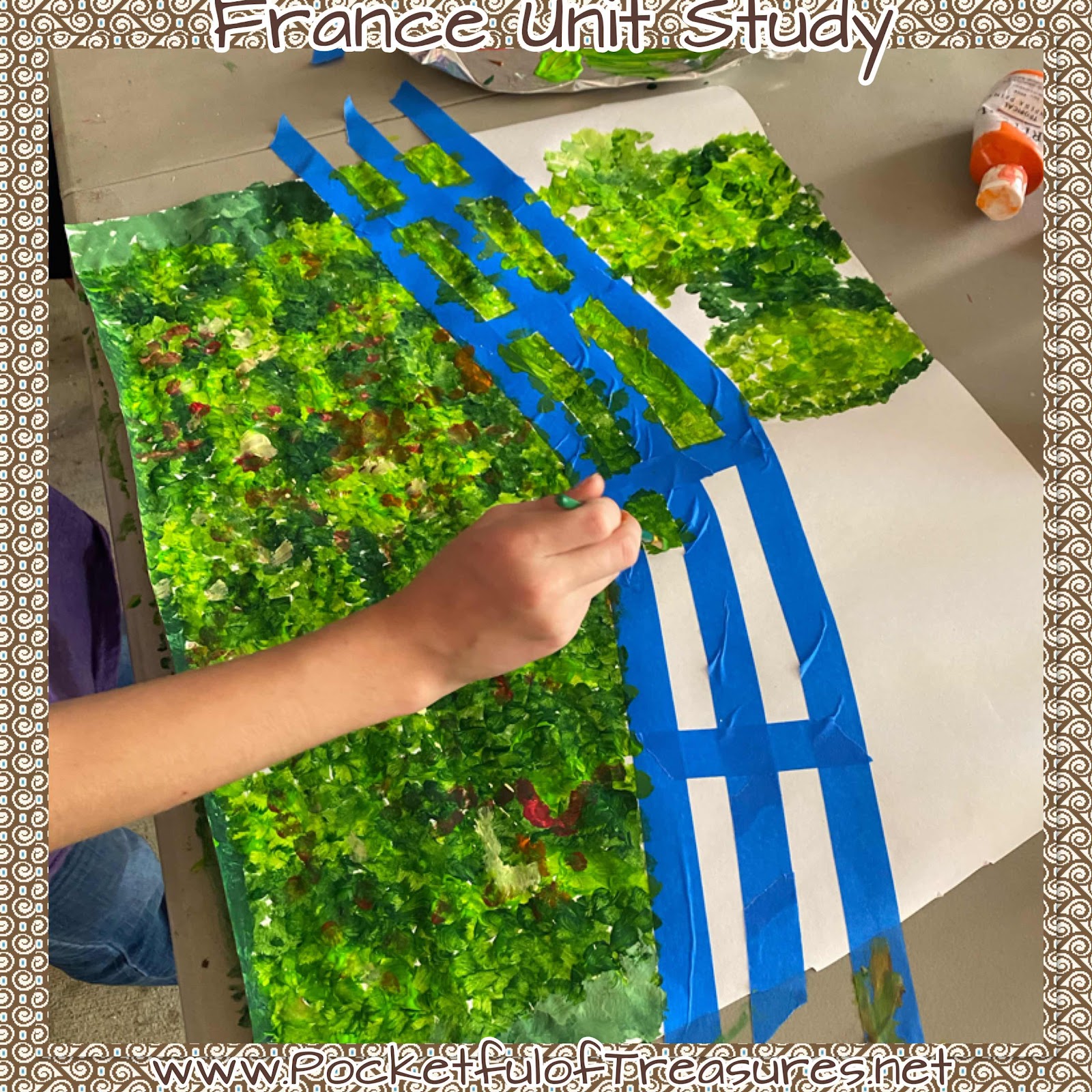 Our next study in France focused on French art, particularly Monet and the Impressionist movement that transformed French painting. We read Monet by Shelley Sateren and Mornings with Monet. Monet had painted his water lily pond hundreds of times, so we decided we would try to paint it as well. You can too! 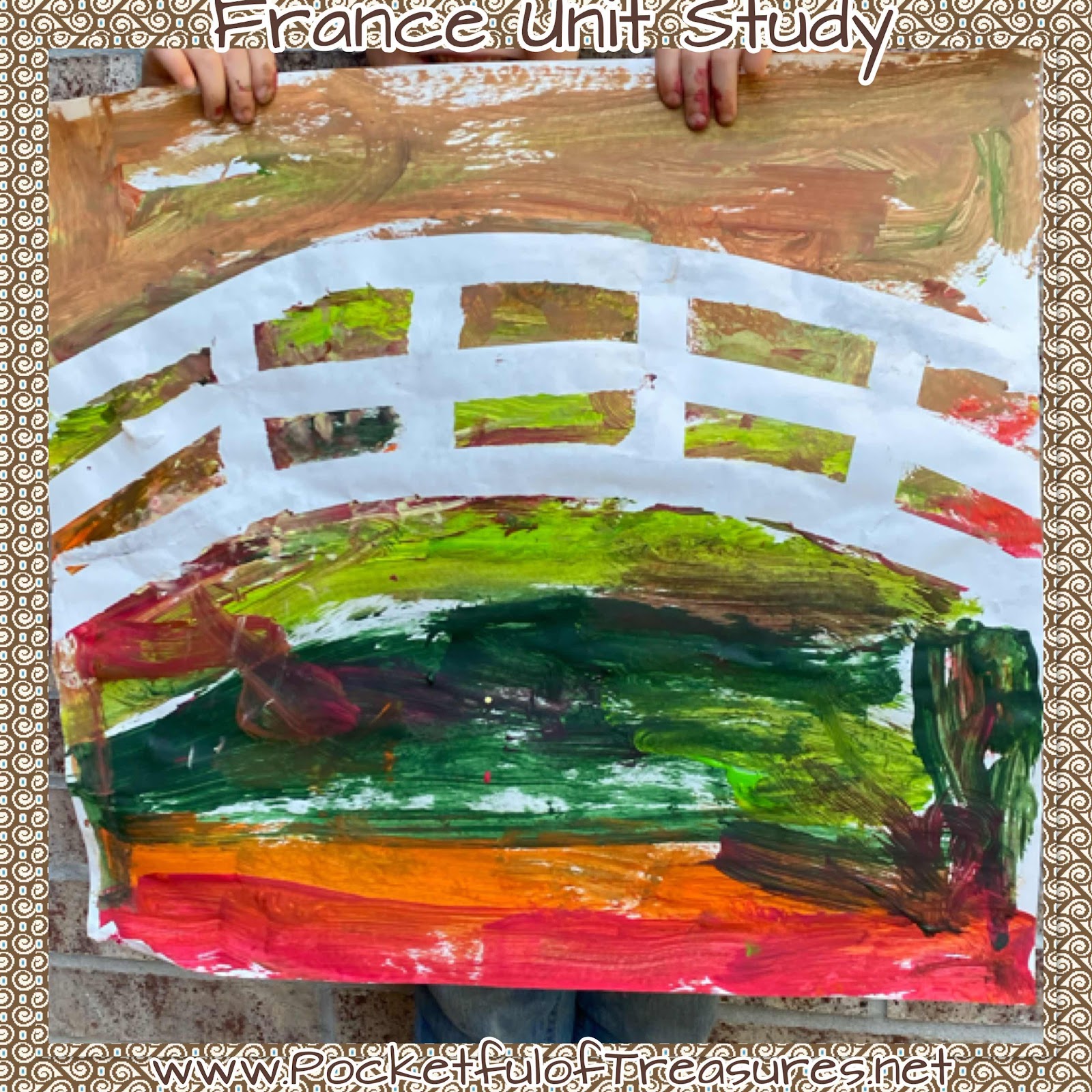 Using painter's tape, we marked off the Japanese style bridge that goes over the pond. I asked the kids to think about what time of day they wanted to represent in their photos, and to think about the light during that time of day. Is it bright or dark? Are there shadows or highlights? What colors are unique to that time of day? Then with some printouts of Monet's paintings as a guide, they set to work with short brush strokes to make their paintings. After they dried, we pealed back the painters tape to reveal the bridge. 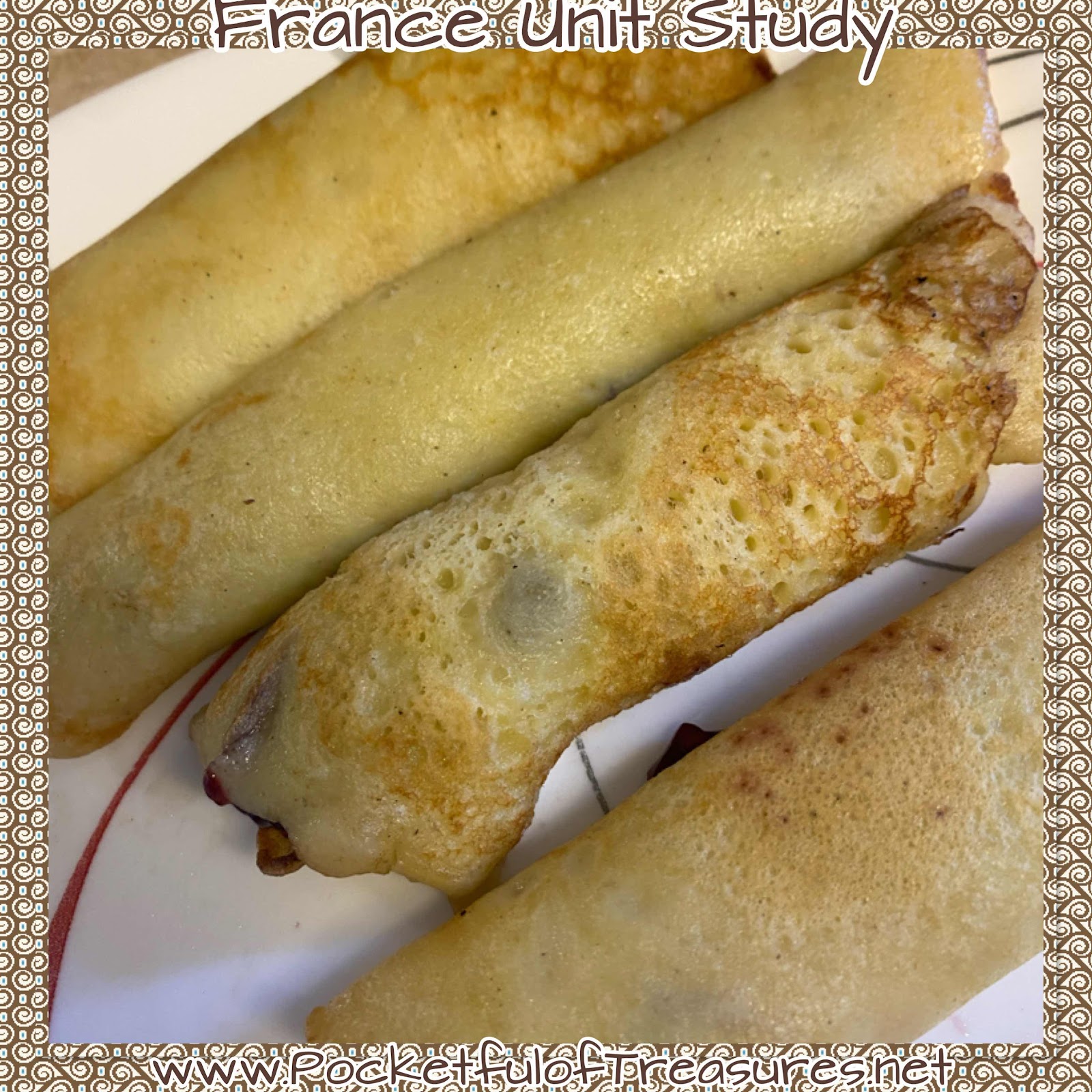 And of course we couldn't leave France without sampling some French cuisine. French cooking is tasty! We had Quiche Lorraine for breakfast, Classic Croque Monsieur sandwiches for lunch, and Crepes for dinner... which led to a big debate in our home. How do you serve crepes? Folded or rolled? We would love for you to chime in on Instagram and let us know! 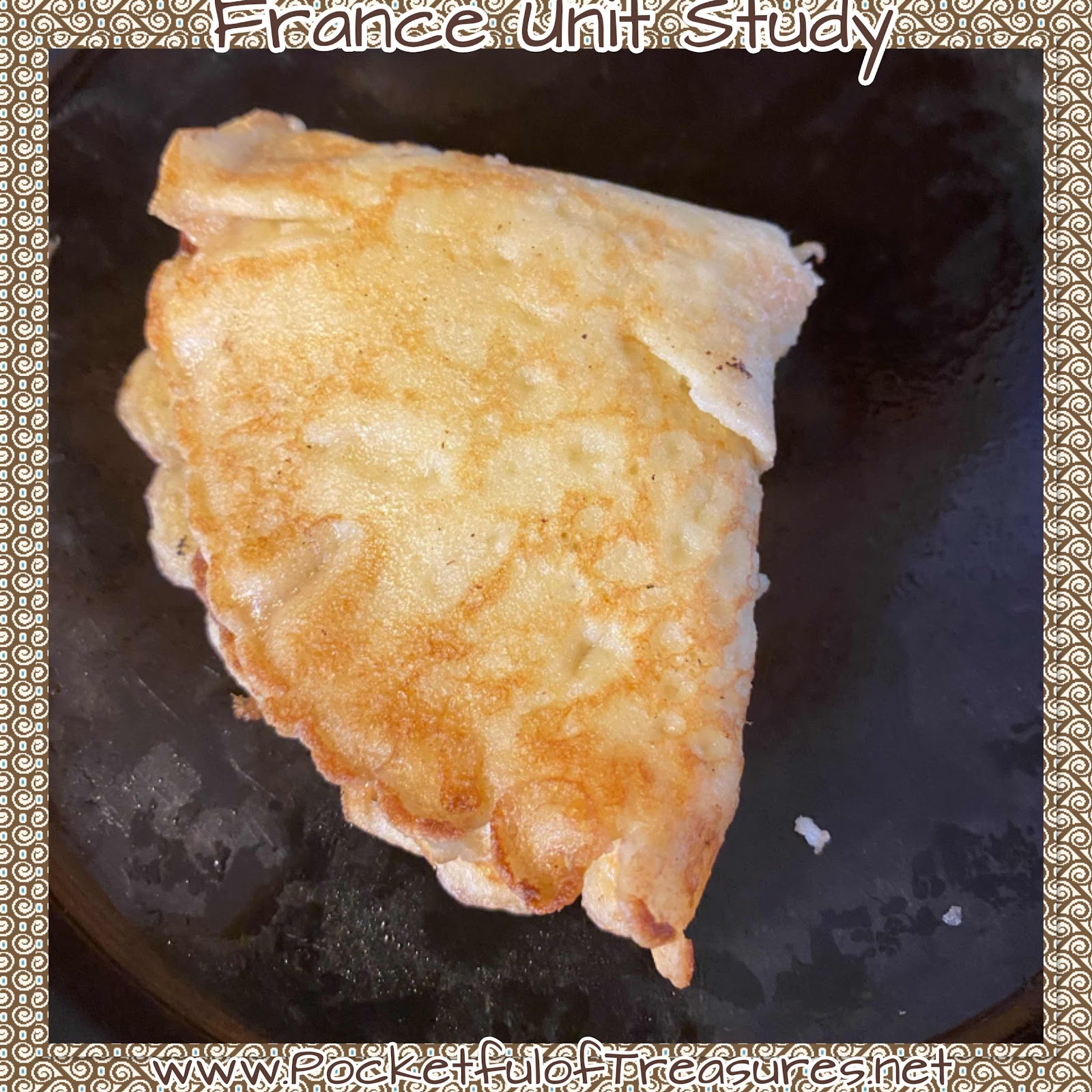 For more homeschool inspiration, click on the Homeschool tab at the top of the page (or in the dropdown menu if you are viewing on a phone). Thanks for stopping by!

***Pocketful of Treasures is a participant in the Amazon Services LLC Associates Program, an affiliate advertising program designed to provide a means for sites to earn advertising fees by advertising and linking to Amazon.com***