Unlike other unit studies that we have done, there is an overabundance of books and information on World War II. The problem was not finding resources, but rather narrowing it down. I also planned this unit study during the great Arkansas Snowpocalypse, so I had some extra time to search the web and click through Amazon. It will take us a while to get through everything, so I will be breaking the posts up into smaller topics. 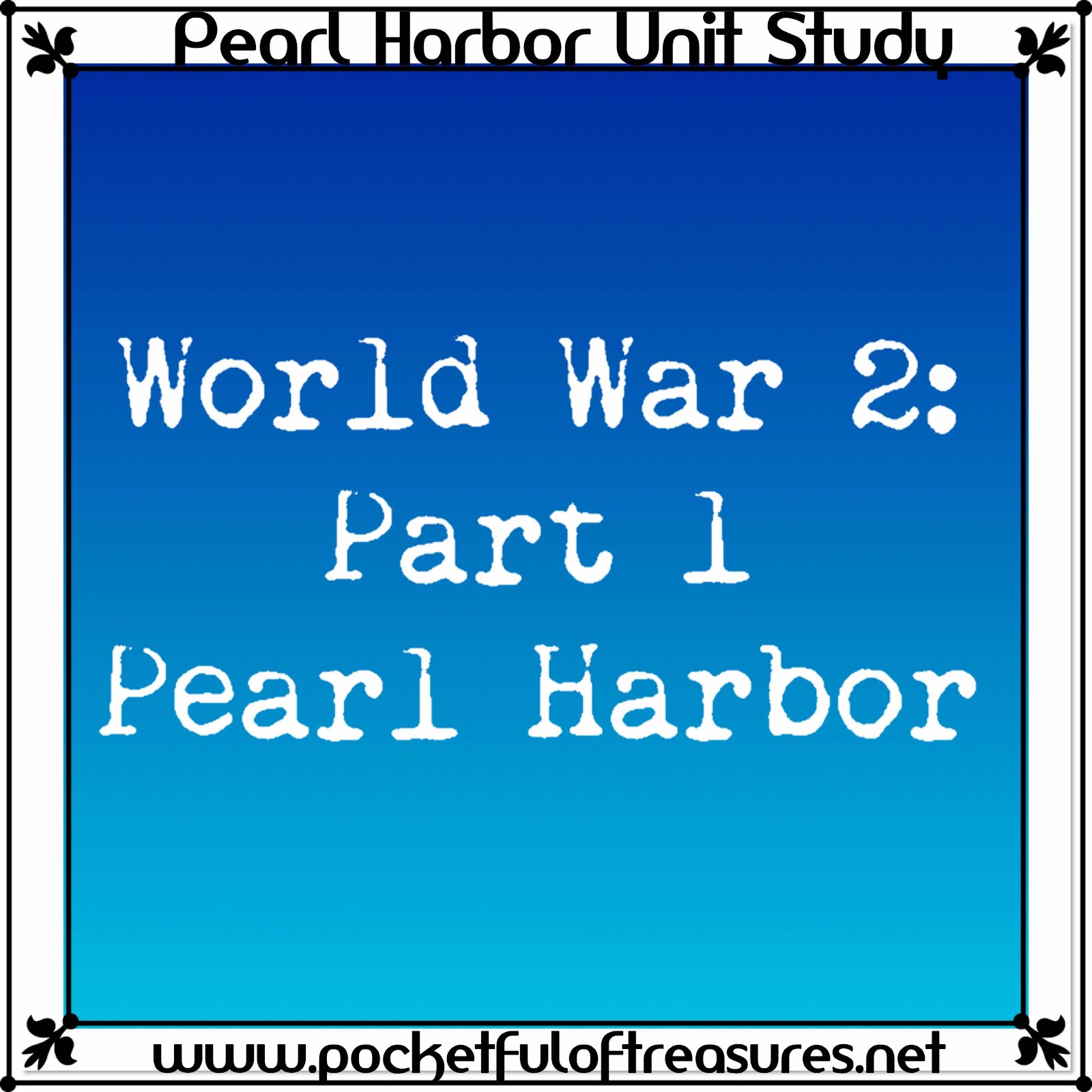 We began this week with Pearl Harbor. As with almost all of our history studies, we began with reading a chapter from America's Story, our history curriculum from Masterbooks. We discussed Roosevelt and the tough decisions he was faced in the months leading up to the attack on Pearl Harbor.
WRITING PROMPTS:
Critical Thinking: What role do you think the government should have in world affairs? When is it our duty to intervene in injustices around the world? Do you think FDR should have entered the war sooner?
Creative Writing: Pretend you were a short-tailed albatross flying across the Pacific. You spotted the approaching enemy ships and caught wind of their plan. You try to warn the sailors at Pearl Harbor but they just won't listen to you.
This Roosevelt Rap from the Franklin D. Roosevelt Presidential Library and Museum was a fun, rhythmic bridging point between the Great Depression and World War II. Had I found this resource earlier I probably would have first introduced it when we studied the Great Depression and then revisited it throughout WWII to reinforce it. Lots of facts hidden in this rap. You can print the lyrics to follow along and watch the video with historical footage. Alternatively, you could assign it at the end of your study of Roosevelt's reign and ask your little learners to write a song about Roosevelt and then play this rap. 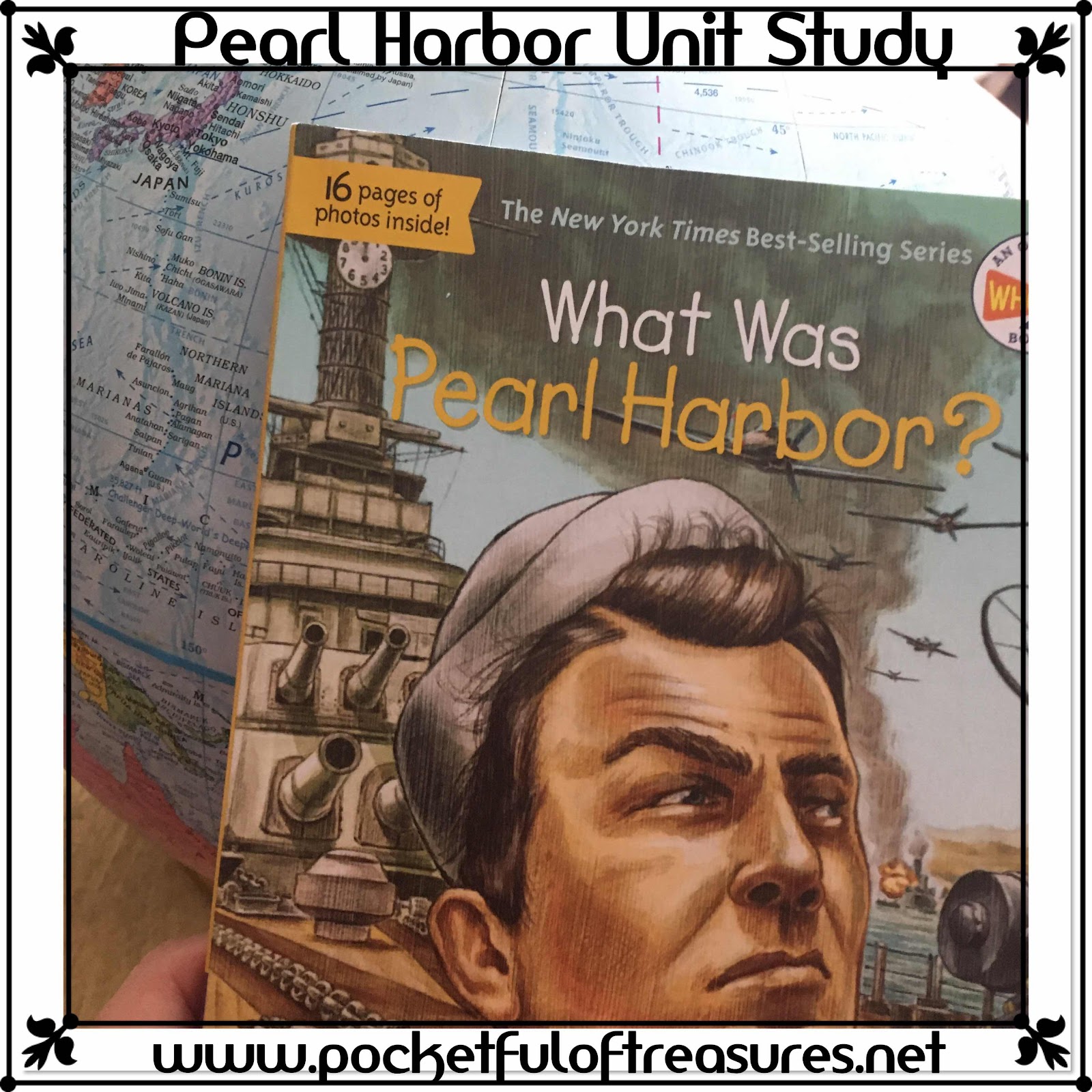 We also read What Was Pearl Harbor and Chapter 23 from Great Events in American History. The latter book contains FDR's Declaration of War.  In it, FDR lists other sites the Japanese forces attacked. 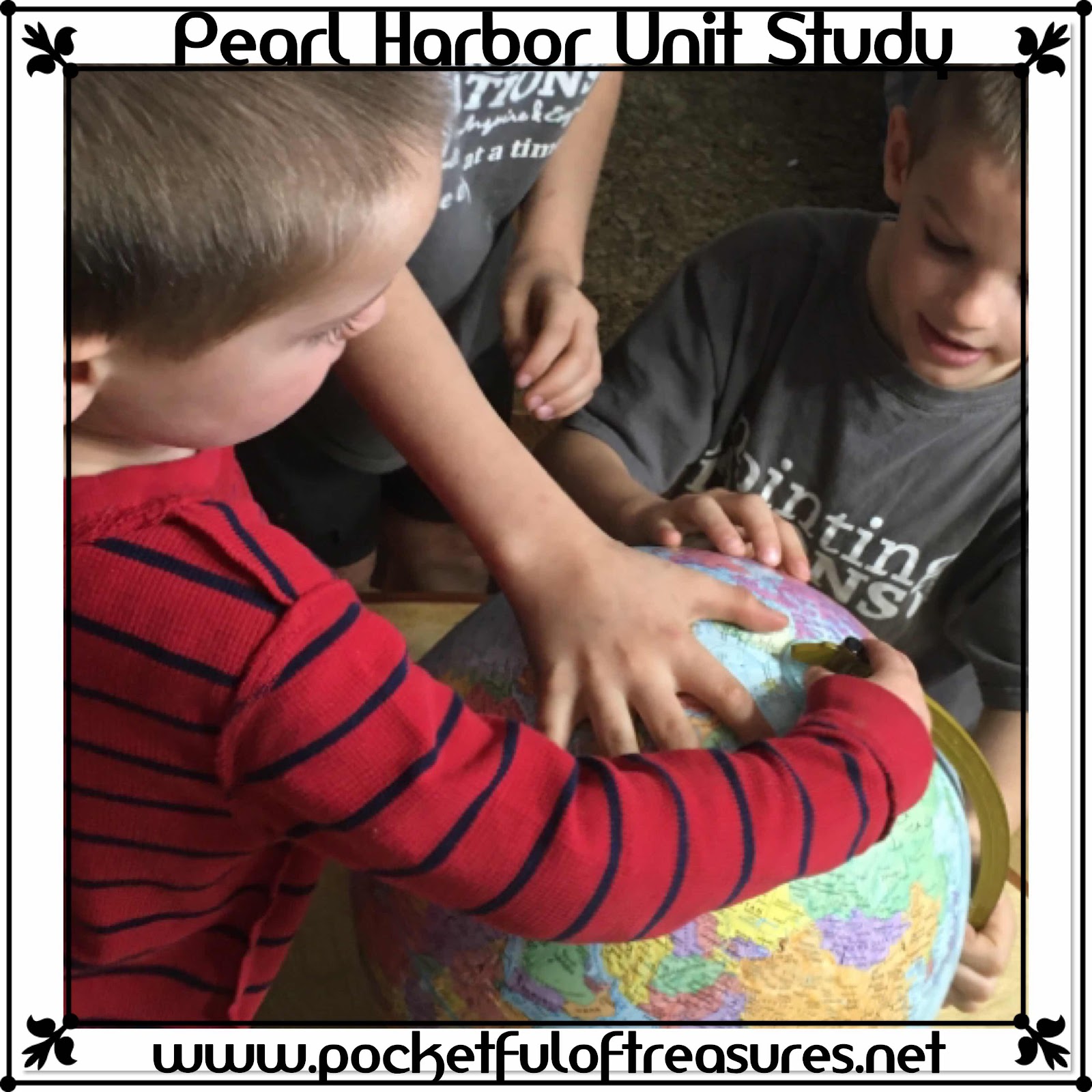 Because our focus for the last few years has been mainly on American History, we took out the globe to reacquaint ourselves with the location of these attacks as well as some of the key countries involved in World War II. The kids then drew a map in their notebooks of Japan, the Hawaiian Islands, and North America. I used to shy away from drawing maps because map making is not one of my strengths, but the children enjoy doing them and learn much more by drawing them than they do just by printing one out. 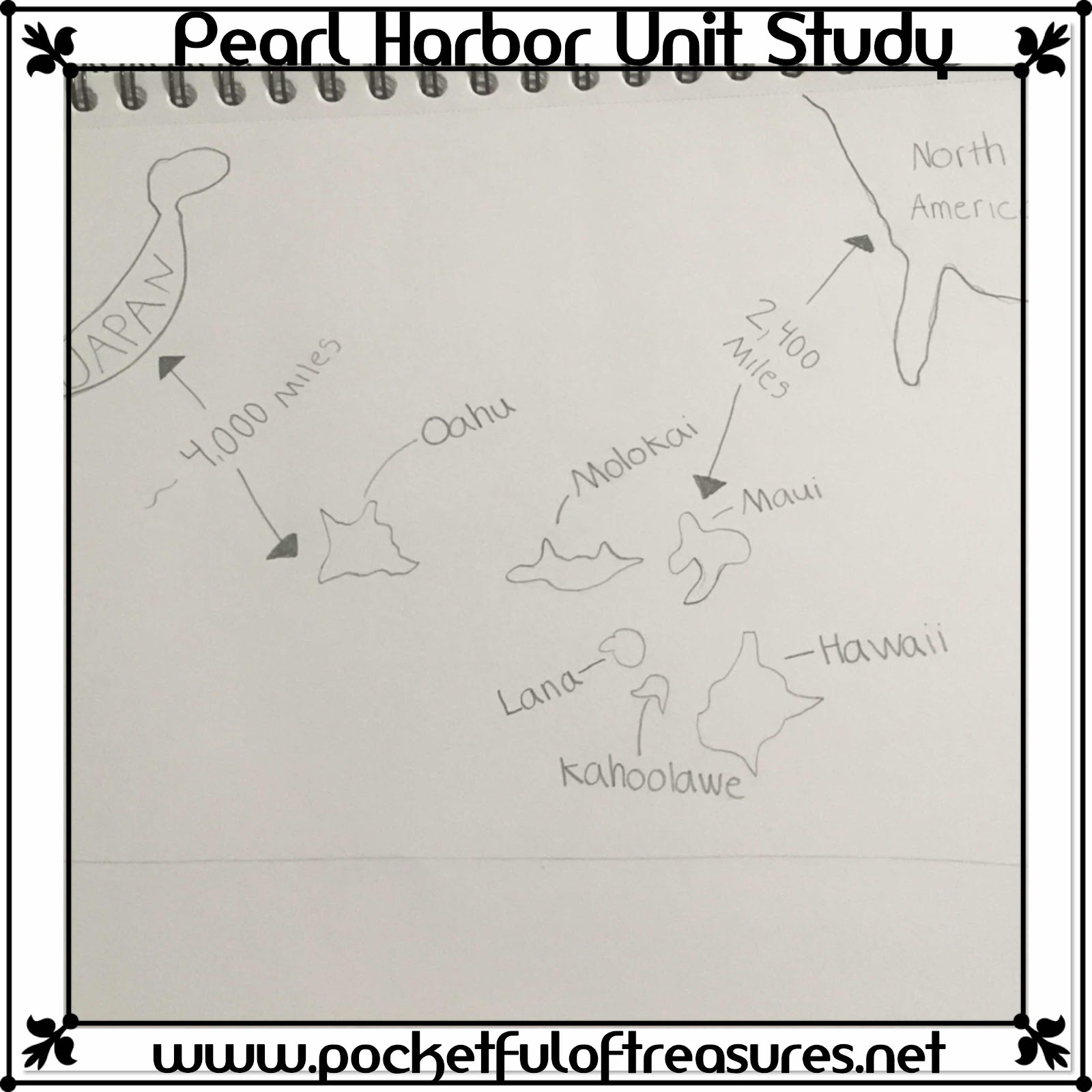 We added a page to our notebook of some of the key leaders in Japan at the time. We will be adding a page for each of the major countries involved in the war as we study them. 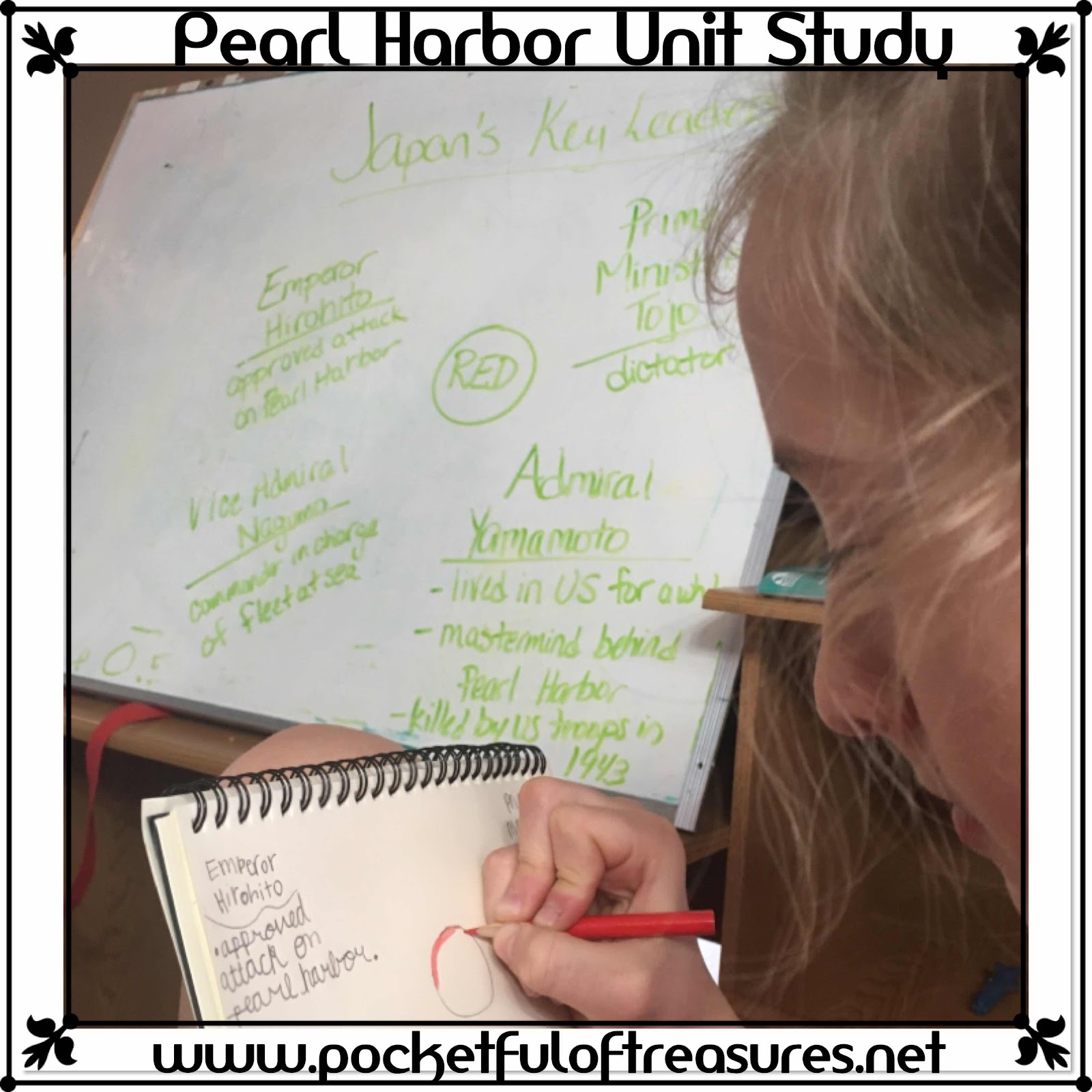 The Pearl Harbor Aviation Museum is full of educational resources! We watched "The Attack on Pearl Harbor Webinar Part 1" together and then each of the girls were assigned a video to watch independently and then share what they learned with the family. They were so interested in the videos that I caught them listening to more of the videos while they were cleaning their room.
We had actually visited the site of the Gordon Hirabayaski Japanese Internment Camp in 2018, and some of the older children remembered learning about Japanese Internment Camps then. PBS has an awesome interactive learning experience called "Prisoner in my Homeland" that our 5th and 6th graders did independently. 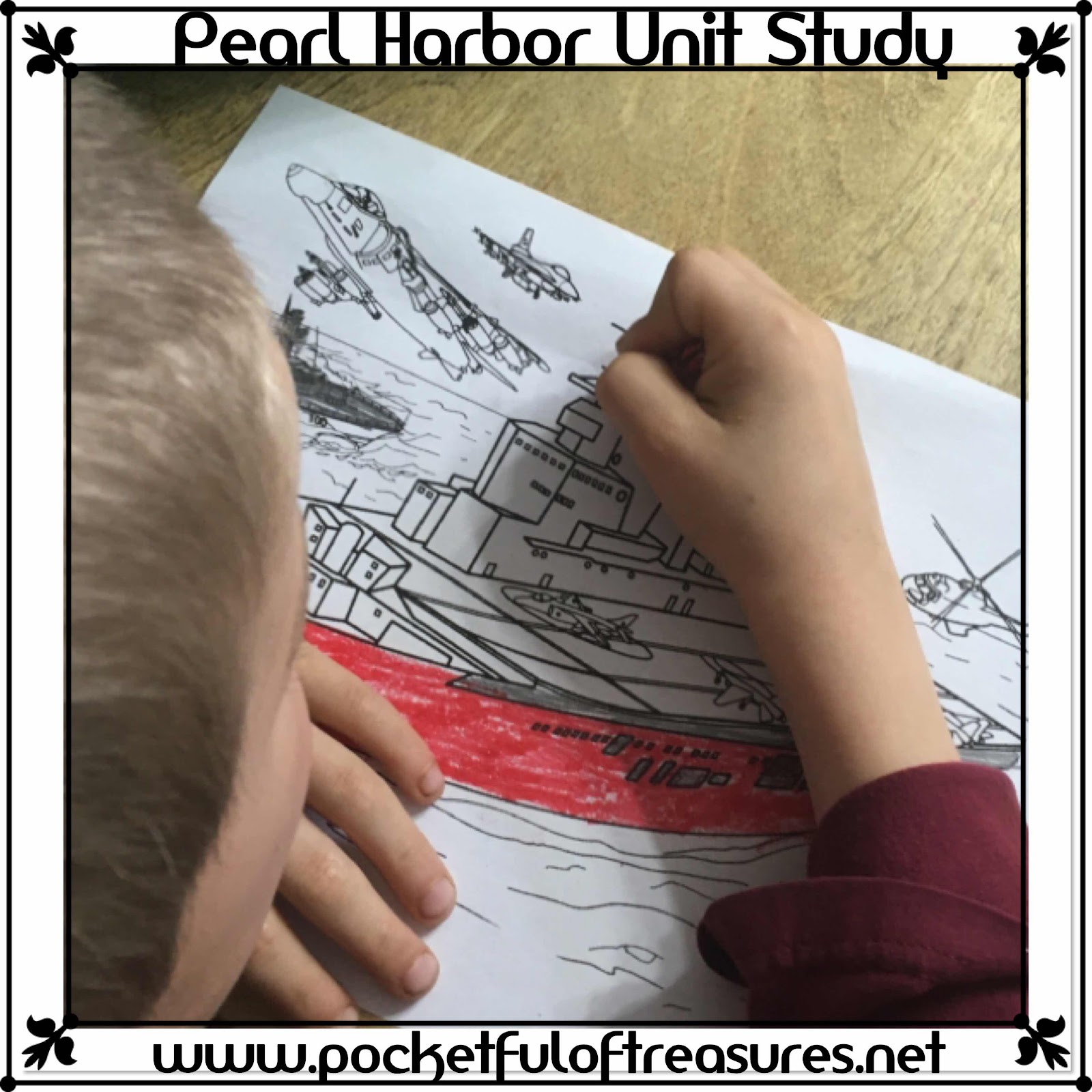 When we study history and science, all of our kiddos from K through 6th study the same topic, but I try to find some age appropriate activities. Again, there is no lack of resources for World War II. I printed out an Aircraft Carrier Coloring Page for our preschooler and kindergartener, and this Connect-the-Dots of Famous Aircraft for out other boys. 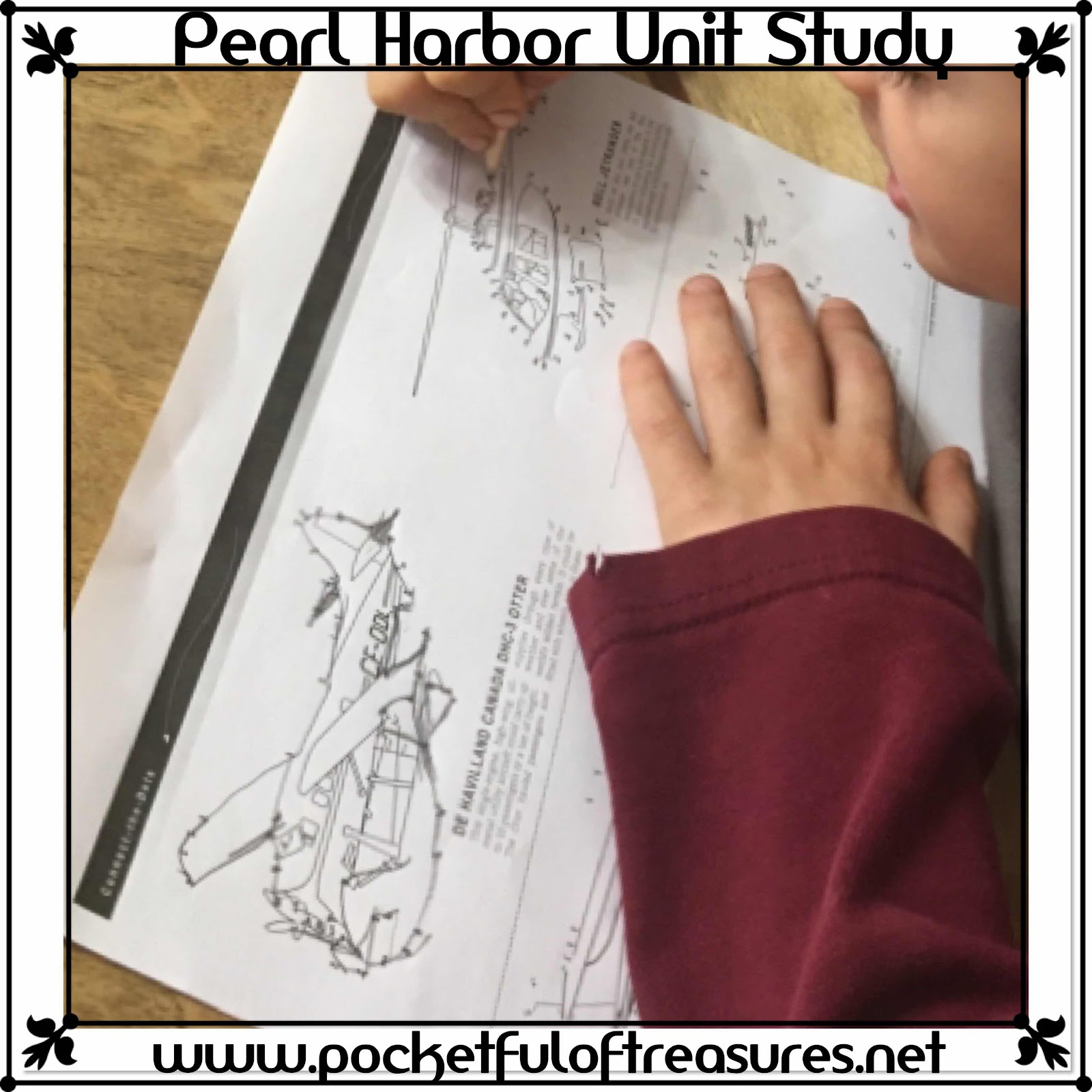 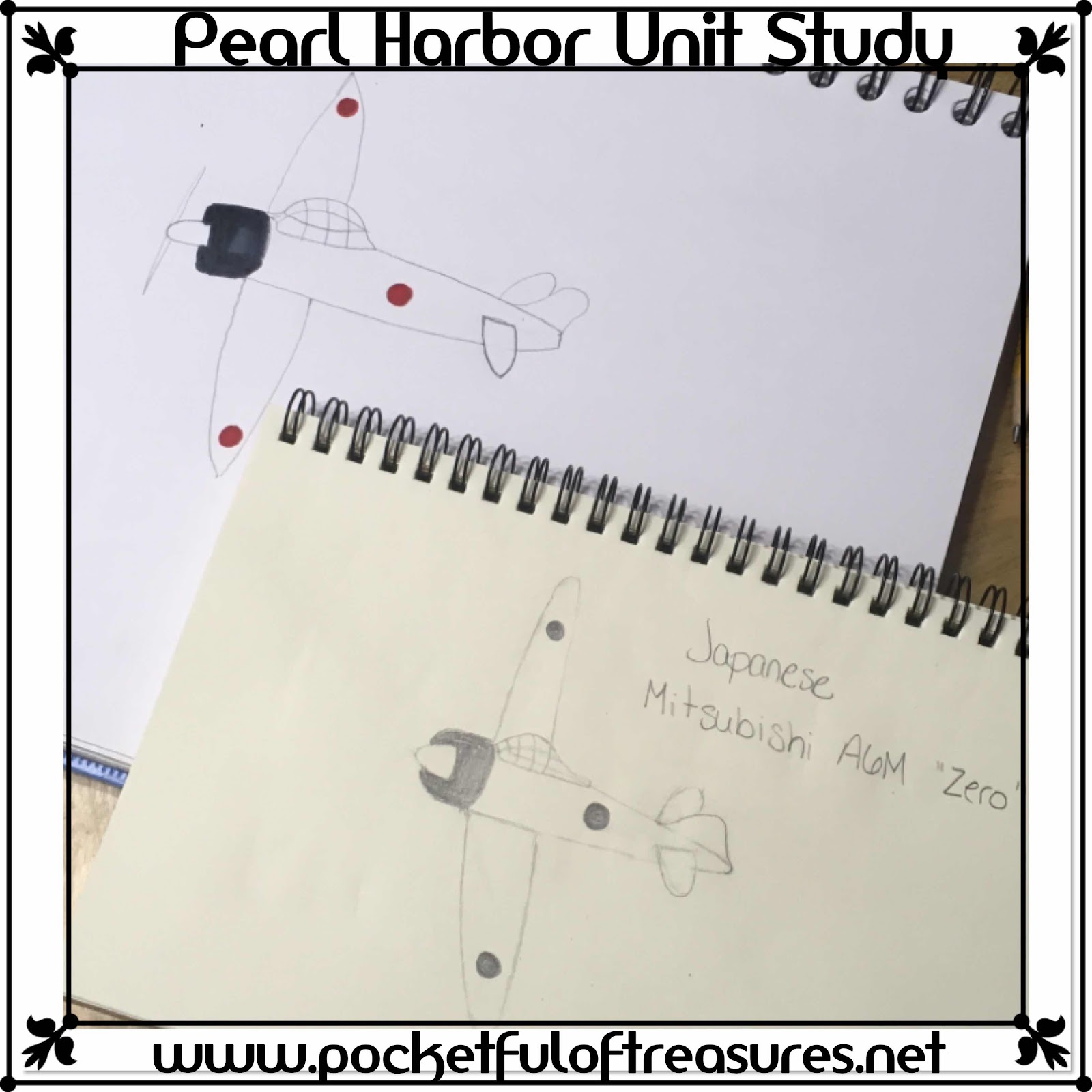 One of the things I have noticed over the years is that when I interest myself in something, some of the kids will get curious and interested as well. A few of our kids love to draw and I have been working on improving my drawing skills. I sat down to try to draw a Japanese "Zero" and several of the children wanted to draw one too. They have been asking what other aircraft we can learn to draw, so I will be included more military drawings in our assignments next week. 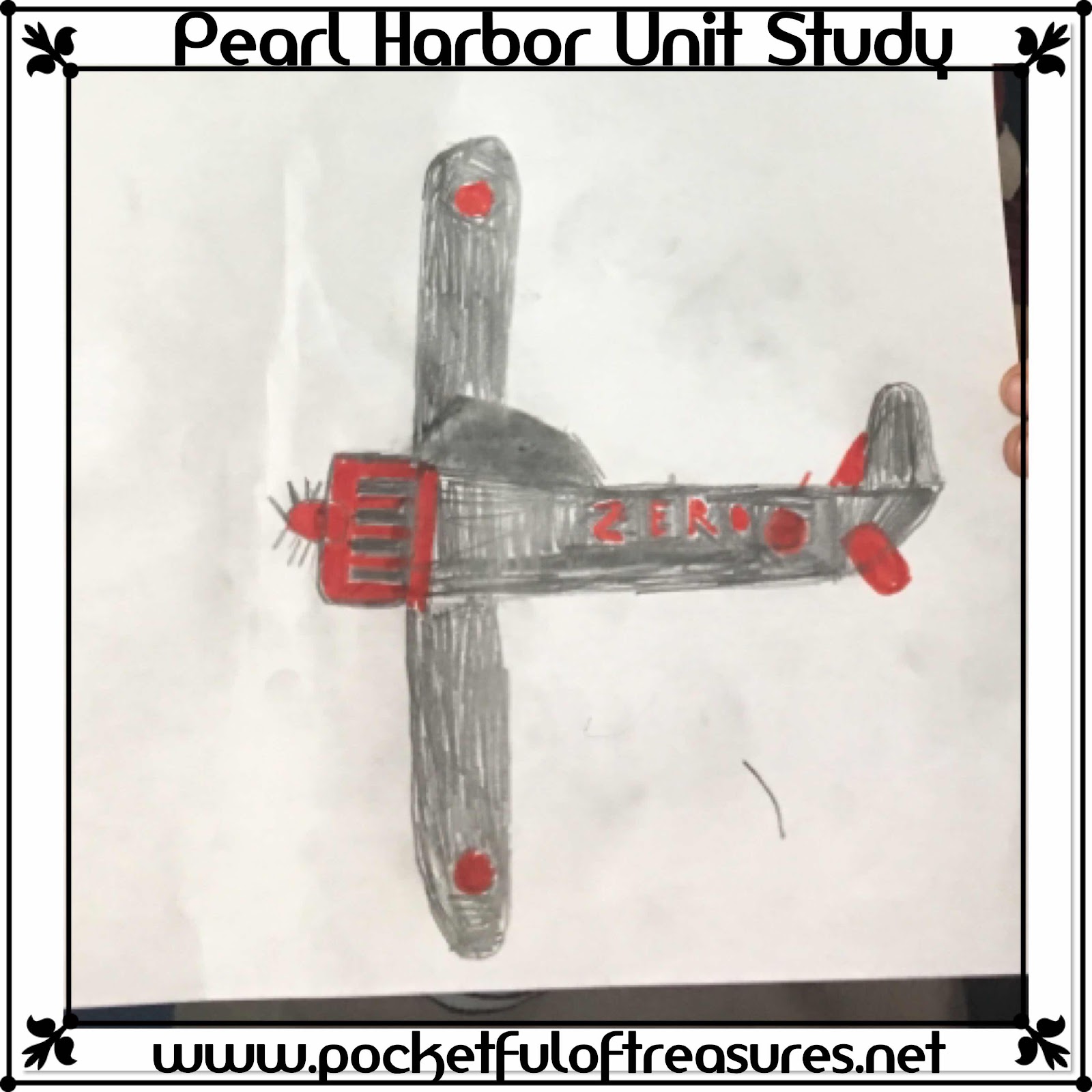 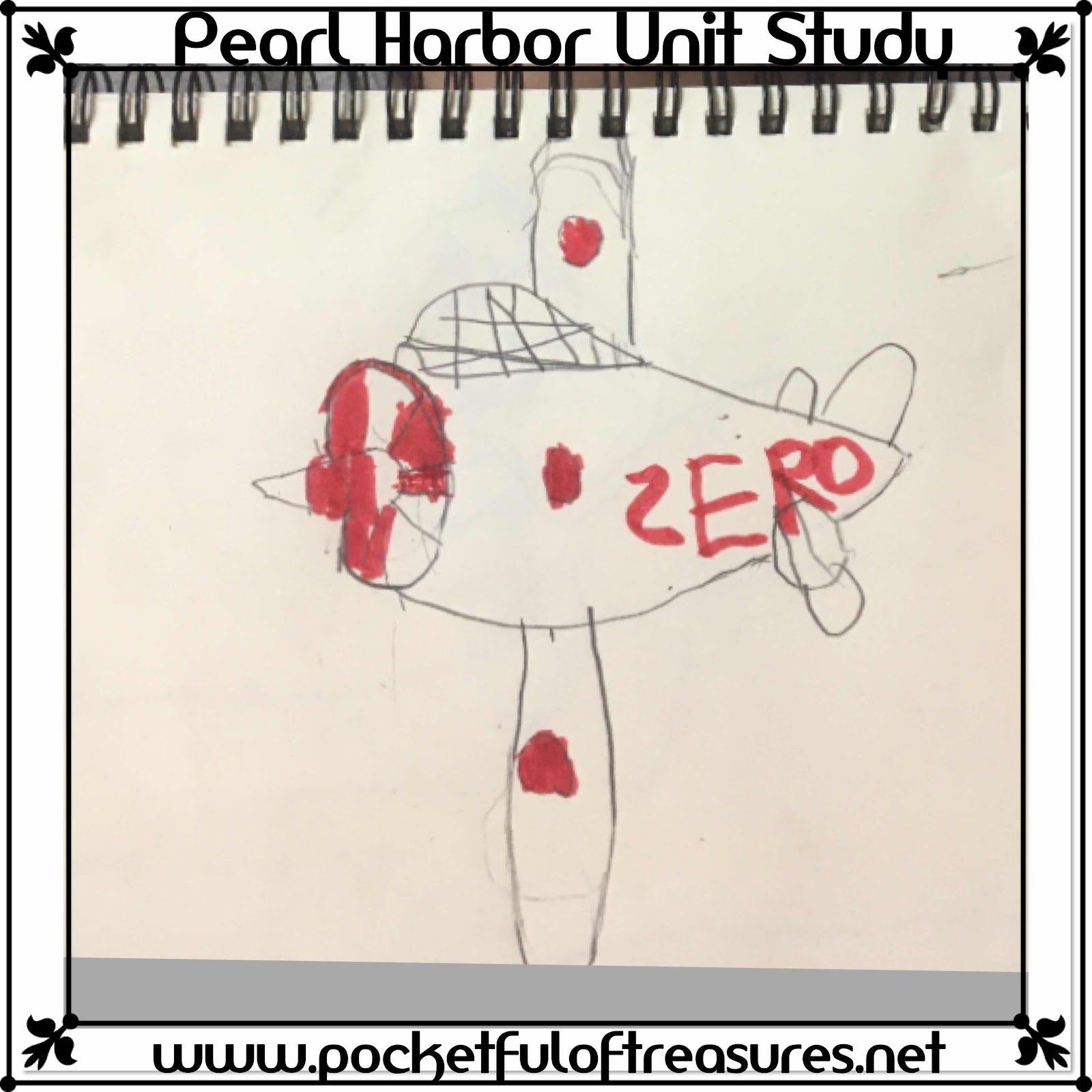 While not originally planned, one of our boys asked about torpedoes and how they work. We found an interesting video of a man crawling down a torpedo tube. The video did a wonderful job of explaining how the torpedoes are loaded and launched.
Stay tuned... lots more on World War II to come!
***Pocketful of Treasures is a participant in the Amazon Services LLC Associates Program, and affiliate advertising program designed to provide a means for sites to earn advertising fees by advertising and linking to Amazon.com***
at 4:25:00 PM