For months my mom and dad had been planning a very special trip to take the children to Clearwater Marine Aquarium to see Hope and Winter from Dolphin Tale and Dolphin Tale 2.  She bought them the movies this past summer and they have watched them a few dozen times times.  Then we found the book Dolphin Tale 2 at a thrift store right before we left on our trip to Florida.  What a great find!  Plus, it has fit perfectly into our homeschool study of Swimming Creatures (Apologia). 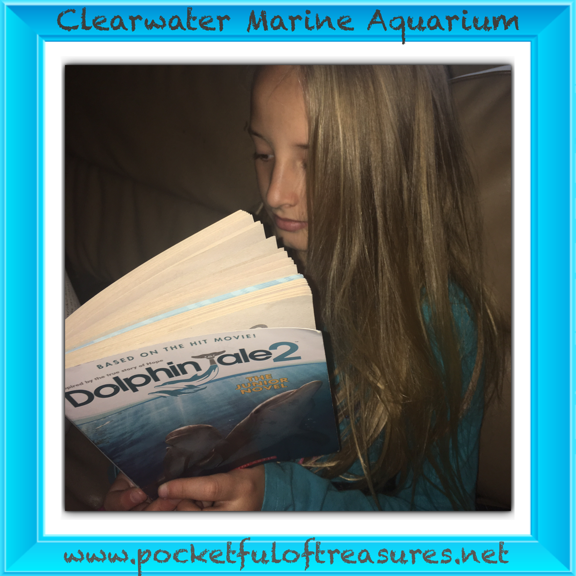 My mom purchased the tickets before we found out military families receive free admittance, so you may want to read through their discounts carefully before purchasing.  Of course, buying tickets and donating to their mission to rescue and rehabilitate marine animals is not a bad thing. 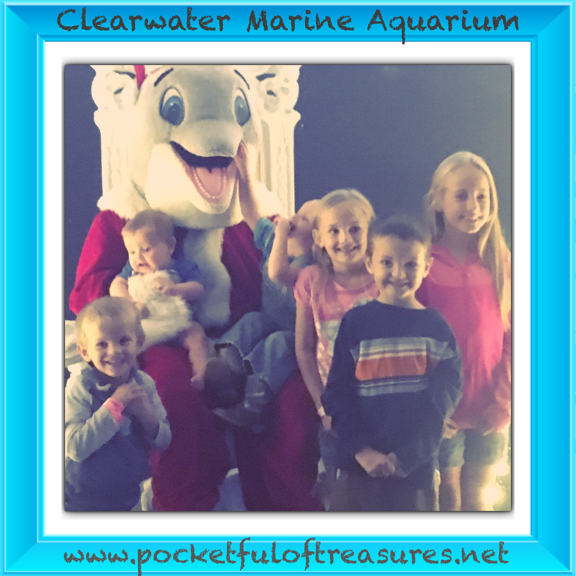 We visited on one of their busiest days of the year - Black Friday.  It was a little crazy and took some extra patience, but still very worth it!  We did get to experience Winter Wonderland and get pictures taken with Winter Claus.  There was also a Kids Zone on the third floor with Holiday crafts and activities. 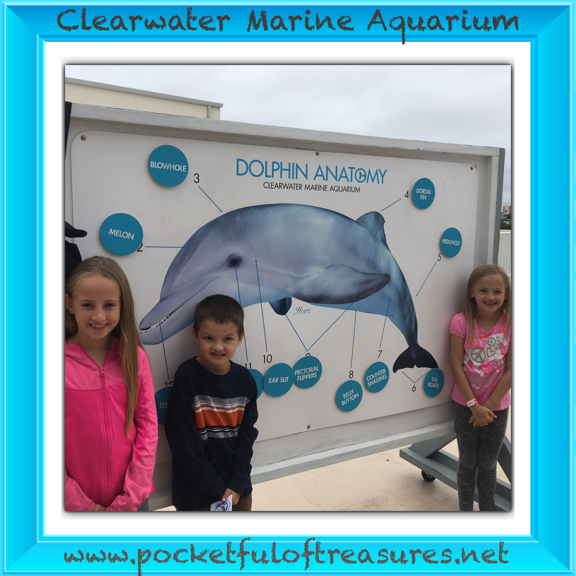 We were there for approximately 3.5 hours. Without the crowds you could probably see everything in an hour.  If you want to hit every presentation, read about all of the animals they have rescued, or book any animal interactions or tours then you can easily spend the entire day here.  We did go to several of the presentations including Dolphin Anatomy Game (very interactive and the kids got to participate), Resident Dolphin Talk, and Tail Talk.  We could definitely have spent more time viewing the ICU Hallway and Animal Hospital, but it was super packed when we walked through. 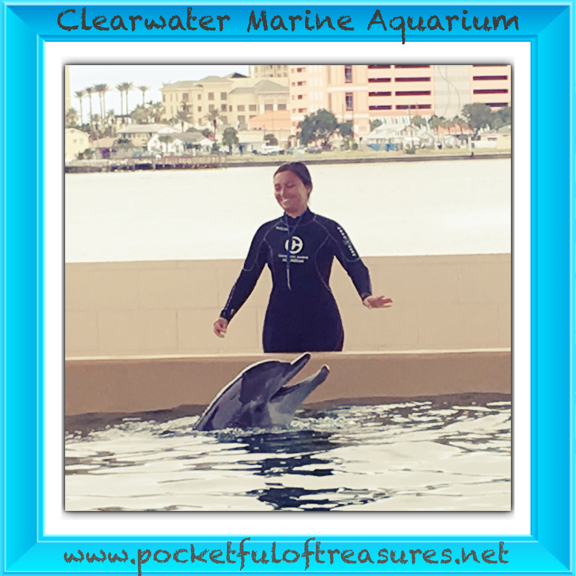 Most of the presentations were on the Stranding Deck at Nicholas' pool.  Nicholas puts on a great show! 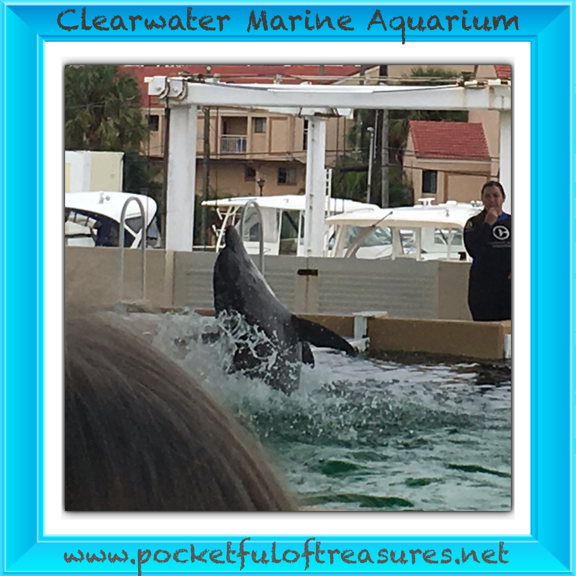 Nicholas had followed his sick mom onto shore when he was just a few months old.  He was rescued on Christmas Eve and suffered 3rd degree skin burns across 36% of this body.  Within 9 months the burns healed and he was nursed back to health, but because he was orphaned and did not have his mom to teach him how to hunt, echolocate, escape predators, and other skills necessary for survival, he has become a resident dolphin at Clearwater Marine Aquarium.  Nicholas is energitic so if you do not want to get splashed, do not sit in the first few rows on the bleachers! 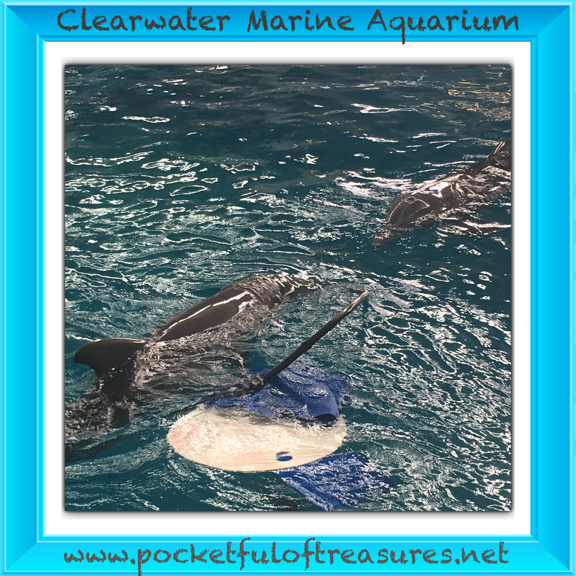 Hope and Winter are the other two resident dolphins presently at Clearwater Marine Aquarium.  Winter became famous in the movie Dolphin Tale, but we were surprised to learn that there are many differences between the movie and true story. 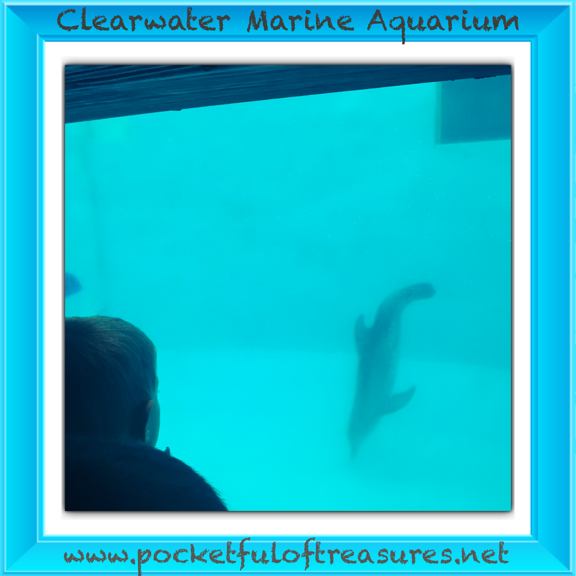 Winter was found stranded and entangled in a crab trap line, but she was only two months old and was found on the East coast of Florida in Mosquitto Lagoon near Cape Canaveral.  Hubbs-Seaworld Research Institute were the first responders because they were the closest, and she was then transported to Clearwater Marine Aquarium.  She did have extensive injuries which caused necrosis of her tail, but it naturally sloughed off and was not amputated.  She adapted and taught herself to swim.  She uses the prosthetic tail as part of her therapy.  She never minded the prosthetic as the movie portrays because the trainers desensitized her by slowly introducing it to her environment over several weeks and used positive reinforcement. 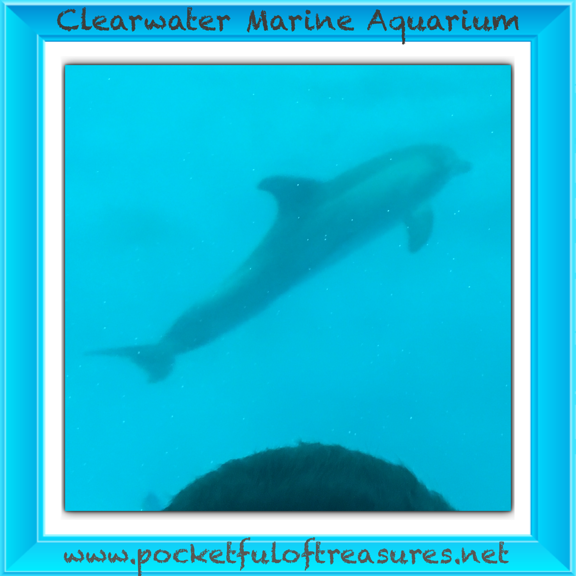 Also, unlike portrayed in the movie, Hope and Winter were best friends from the start.  Hope was rescued when she was only 2-3 months old.  She loves playing with Winter.  You can watch them swim from above on the second level of the aquarium or from below at Shipwreck Alley. 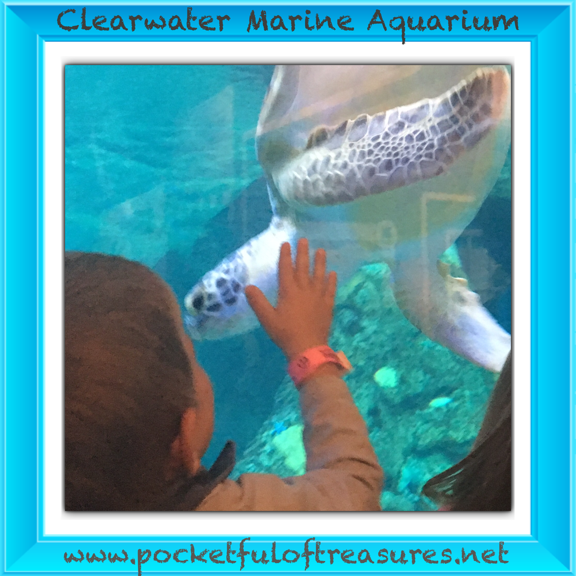 On the first level of the aquarium you also have a great view of other underwater viewing tanks.  At Mavis's Rescue Hideaway you'll find several resident sea turtles.  Far more sea turtles than dolphins are rescued each year due to their susceptibility to boat strikes and fishing line entanglement. 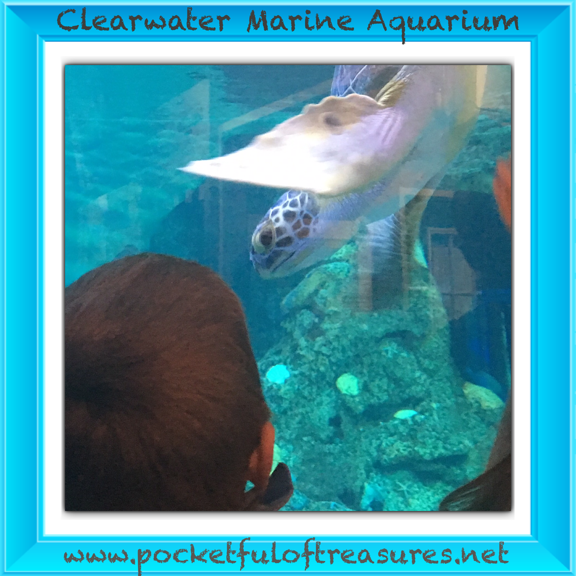 The fish and sea turtles seemed to come right over to say "hi". 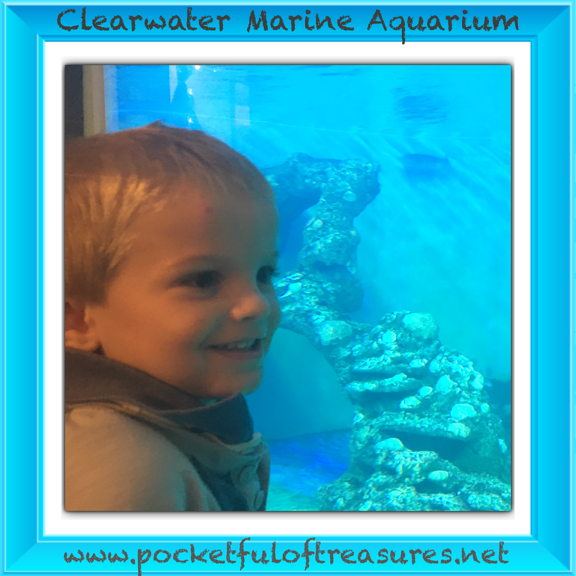 I loved watching their faces and the look of wonder and discovery.  They probably could have spent the afternoon here sitting and watching. 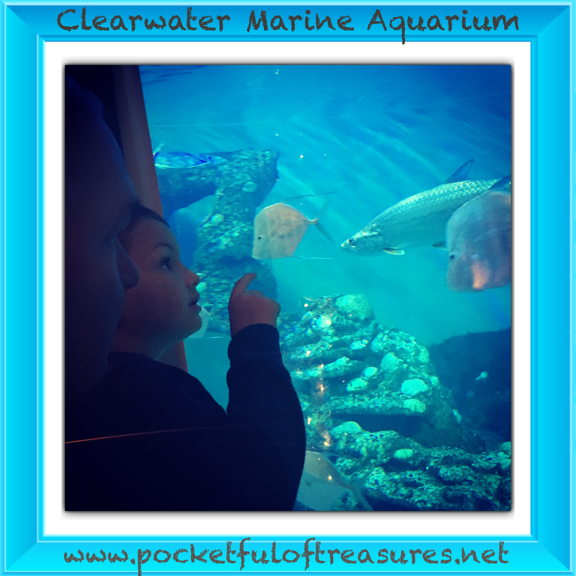 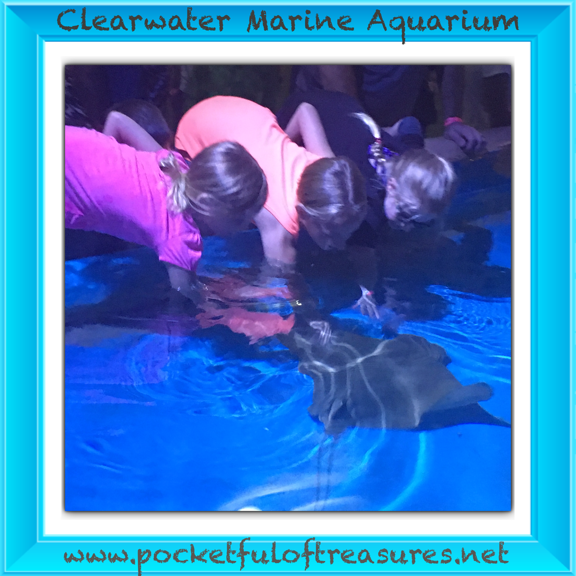 Around the corner is Stingray Beach.  Touching the stingrays was definitely a highlight!  Be sure to roll up the sleeves of your little ones before approaching 😉. There is another touch tank on the lower level where they were able to touch hermit crabs and view puffer fish. 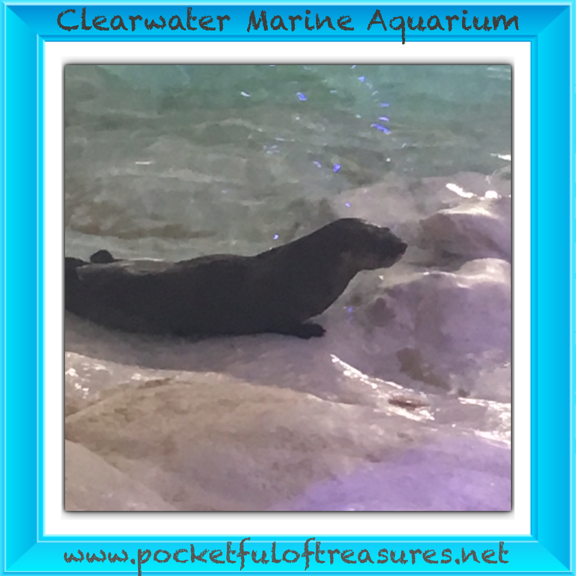 There are a few other exhibits and presentations, like Otter Oasis, Shark Pass, and Rufus Beach.  This small aquarium certainly abounds with learning opportunities and is an inspiration to many.  We bought the movie Winter which highlights her real Rescue and story of survival, as well as how she has become a life-changing role model. 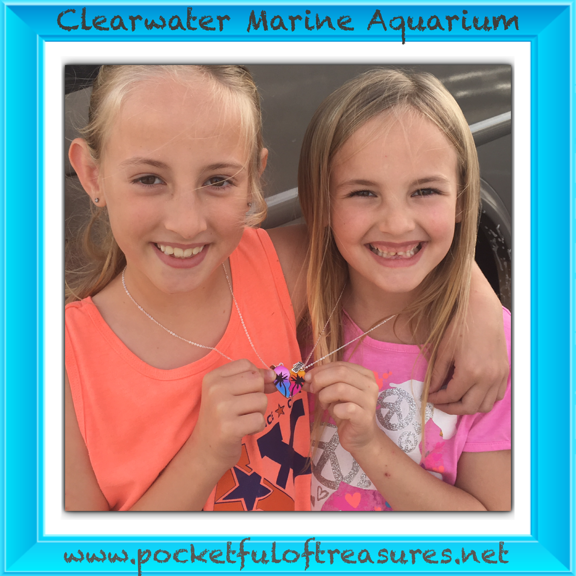