The first official flag of the United States was created by Congress on June 14, 1777.  In 1916, President Woodrow Wilson issued a presidential proclamation offering national recognition of "Old Glory".  Unfortunately, many in our own country no longer know what the American Flag stands for.  We must honor our flag and our heritage by teaching our children so that they may teach their children. 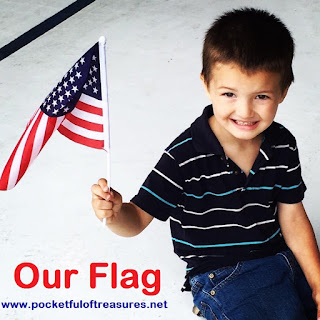 The book "World of Flags" was passed down to us from my husband's father.  There is lot you can learn about a nation and state's history by studying their flag.

"Each country has the assurance that their flag does them honor, and they in turn honor their flag.  So it is with the United States.  Our Flag is a symbol of our way of life; It is a symbol of our past; It is a symbol of the responsibilities we must accept as guardians of our heritage; It is the visible emblem of the mind and soul of the American people.  It reminds us of our daily blessings."  (Oakley, Charles.  World of Flags.  Chicago: F.E. Compton Co., 1970.  Print) 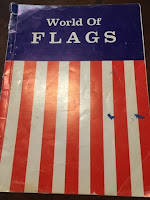 It was resolved that the flag of the United States would be made of thirteen stripes, alternate red and white: and that the union have one star for each state, white in a blue field.

On June 14, 1923 a code was drawn up at the National Flag Conference held in Washington, DC to supply a guideline for the proper use and display of the flag.  In June 1942, Congress adopted a resolution which made the flag code a law.

Here are some highlights on how you can honor and display the flag:
*Always flight the flag of the United States above all subordinate flags on the same halyard.
*Salute the flag during the hoisting or lowering of the flag, or when it passes in a parade.
*The half-staff position honors the nation's heroic dead, as on Memorial day.
*At retreat, the flag is ceremoniously lowered as the bugler blows "Retreat" or a band plays "The Star-Spangled Banner"
*When taken down the flag should be carefully folded. 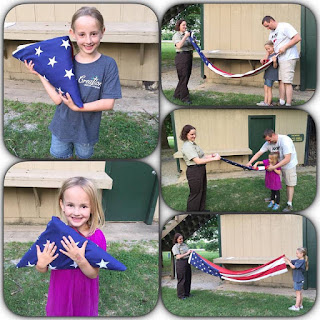 MEANING OF THE FOLDS:
*The first fold of our flag is a symbol of life.
*The second fold is a symbol of our belief in eternal life.
*The third fold is made in honor and remembrance of the veteran departing our ranks, and who gave a portion of his or her life for the defense of our country to attain peace throughout the world.
*The fourth fold represents our weaker nature; as American citizens trusting in God, it is to Him we turn in times of peace, as well as in times of war, for His divine guidance.
*The fifth fold is a tribute to our country, for in the words of Stephen Decatur, "Our country, in dealing with other countries, may she always be right, but it is still our country, right or wrong."
*The sixth fold is for where our hearts lie.  It is with our heart that we pledge allegiance to the flag of the United States of America, and to the republic for which it stands, one nation under God, indivisible, with liberty and justice for all.
*The seventh fold is a tribute to our armed forces, for it is through the armed forces that we protect our country and our flag against all enemies, whether they be found within or without the boundaries of the republic.
*The eight fold is a tribute to the one who entered the valley of the shadow of death, that we might see the light of day, and to honor our brother, for whom it flies on Memorial Day.
*The ninth fold is a tribute to womanhood, for it has been through their faith, love, loyalty, and devotion that the character of the men and women who have made this country great have been molded.
*The tenth fold is a tribute to the father, for he, too, has given his sons and daughters for the defense of our country since he or she was first born.
*The eleventh fold, in the eyes of Hebrew citizens, represents the lower portion of the seal of King David and King Solomon and glorifies, in their eyes, the God of Abraham, Isaac, and Jacob.
*The twelfth fold, in the eyes of a Christian citizen, represents an emblem of eternity and glorifies, in their eyes, God teh Father, the Son, and Holy Ghost.
*When the flag is completely folded, the stars are uppermost, reminding us of our national motto, "In God We Trust"
*After the flag is completely folded and tucked in, it has the appearance of a cocked hat, ever reminding us of the soldiers who served under Gen. George Washington and the sailors and Marines who served under Capt. John Paul Jones and were followed by their comrades and shipmates in the US Armed Forces, preserving for us the rights, privileges, and freedoms we enjoy today.

Our girls have their own flag, and they enjoy folding it each night and in doing so are reminded of our heritage.

Celebrate Flag Day by making a patriotic snack and teaching your children about our Flag! 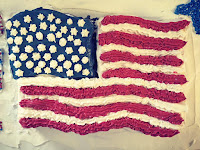 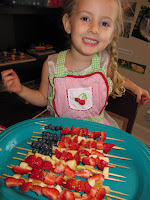