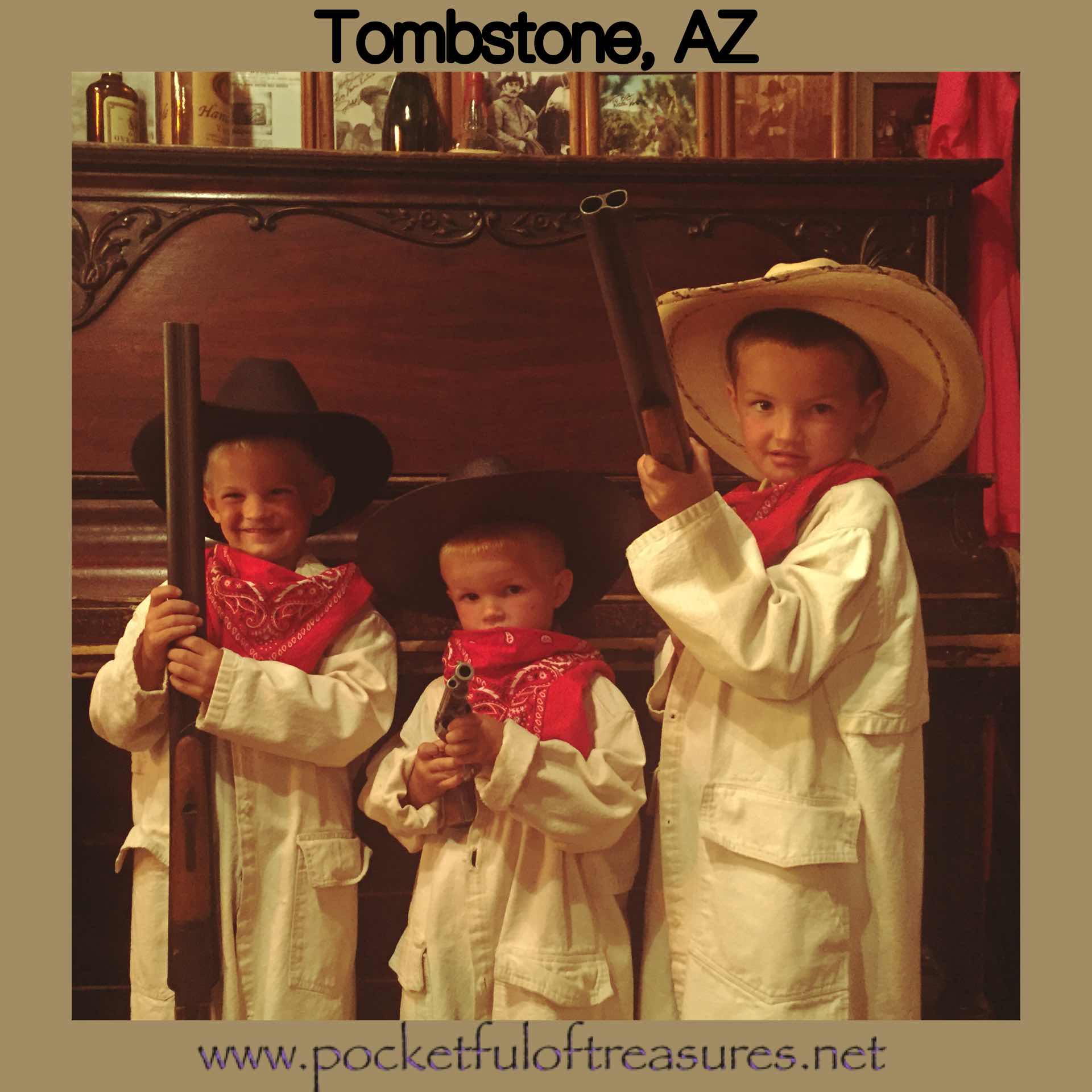 We couldn’t leave Arizona without visiting “the town too tough to die”, so we traveled back in time to 1880 for a lesson on the Wild West. 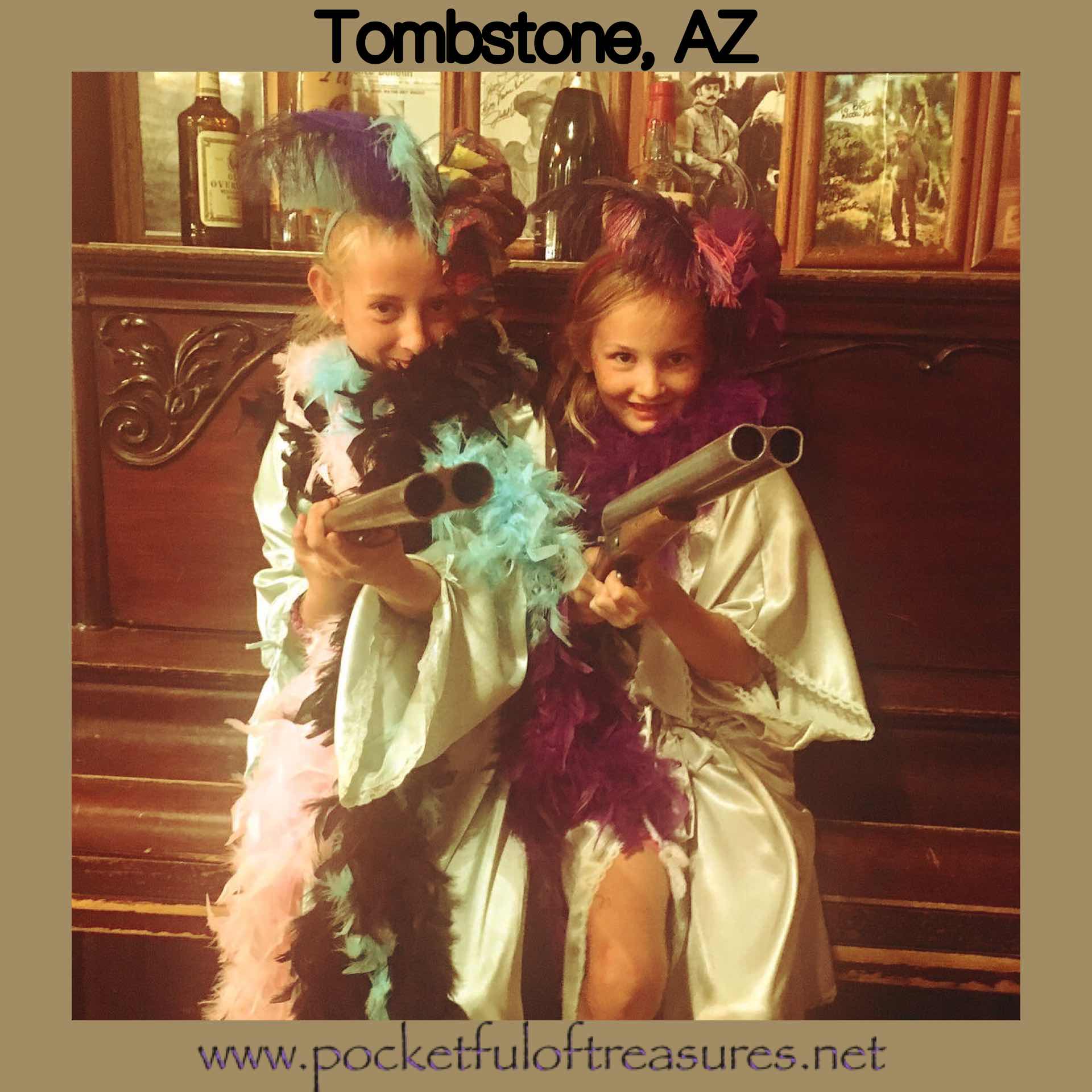 Tombstone was founded in 1879 by prospector Ed Schieffelin.  The Good Enough mine is the original silver mine in Tombstone.  It lies just a block South of the main strip on Allen Street.  They offer tours of the mine, but children must be 4 feet tall to tour. 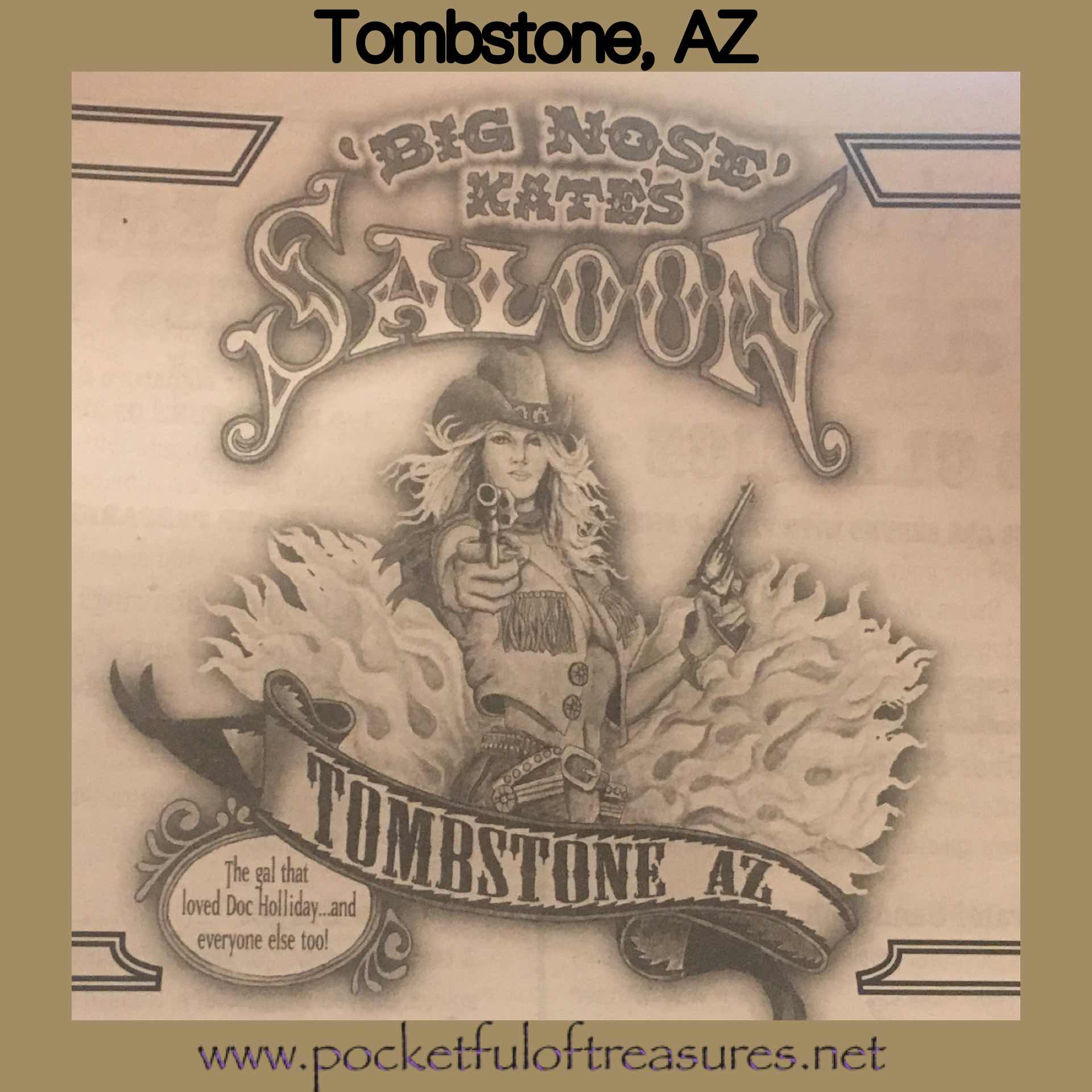 Word quickly spread about the silver strike and the town boomed as prospectors, surveyors, cowboys, homesteaders, lawyers, and business men headed to the area.  It quickly became home to some of the worst gangs and criminals of its time.  The town catered to the rowdy miners and cowboys looking for some fun.  Drinking, gambling, and prostitution were an important part of Tombstone’s early economy.  There were more than 100 saloons in Tombstone. 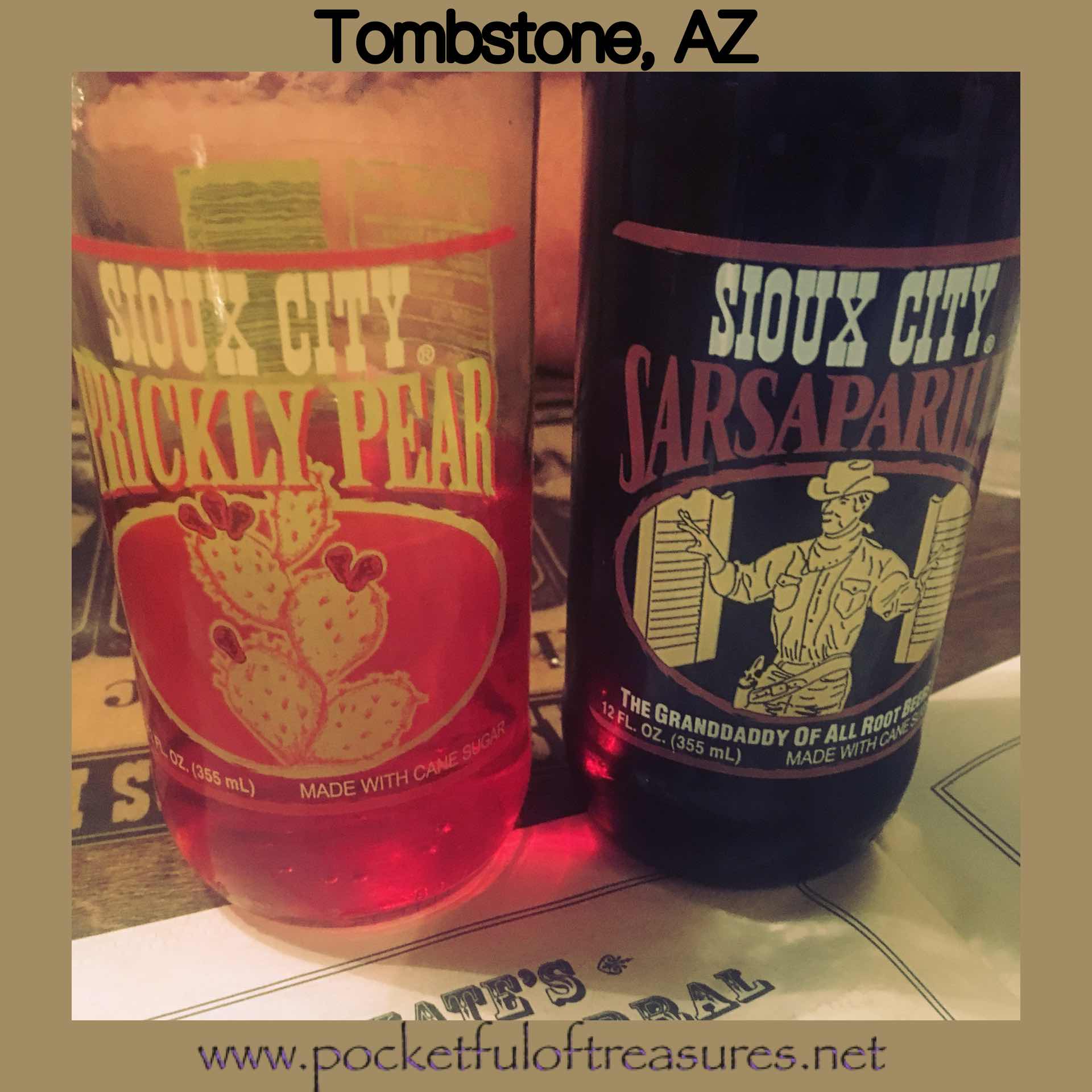 We arrived in Tombstone just before noon and started our day with lunch at Big Nose Kate’s Saloon.  Big Nose Kate, whose name was Mary Katherine Horony-Cummings, was a Hungarian born prostitute and Doc Holliday’s longtime girlfriend. It is said that the Clanton and McLaury brothers stayed at this saloon the evening before their fatal gunfight at OK Corral.  Big Nose Kate’s Saloon boasts of being “the best cowboy bar in the West with live music, great food, and never ending fun!”  We sure had a great time.  The kids enjoyed Sasparilla and Prickly Pear Soda as a treat.  There is not a kids menu, but we got a few burgers and fries and the kids all split.  While we were waiting for the food the kids dressed up and took some old time photos on the piano.  What a fun start to the day in the Wild West! 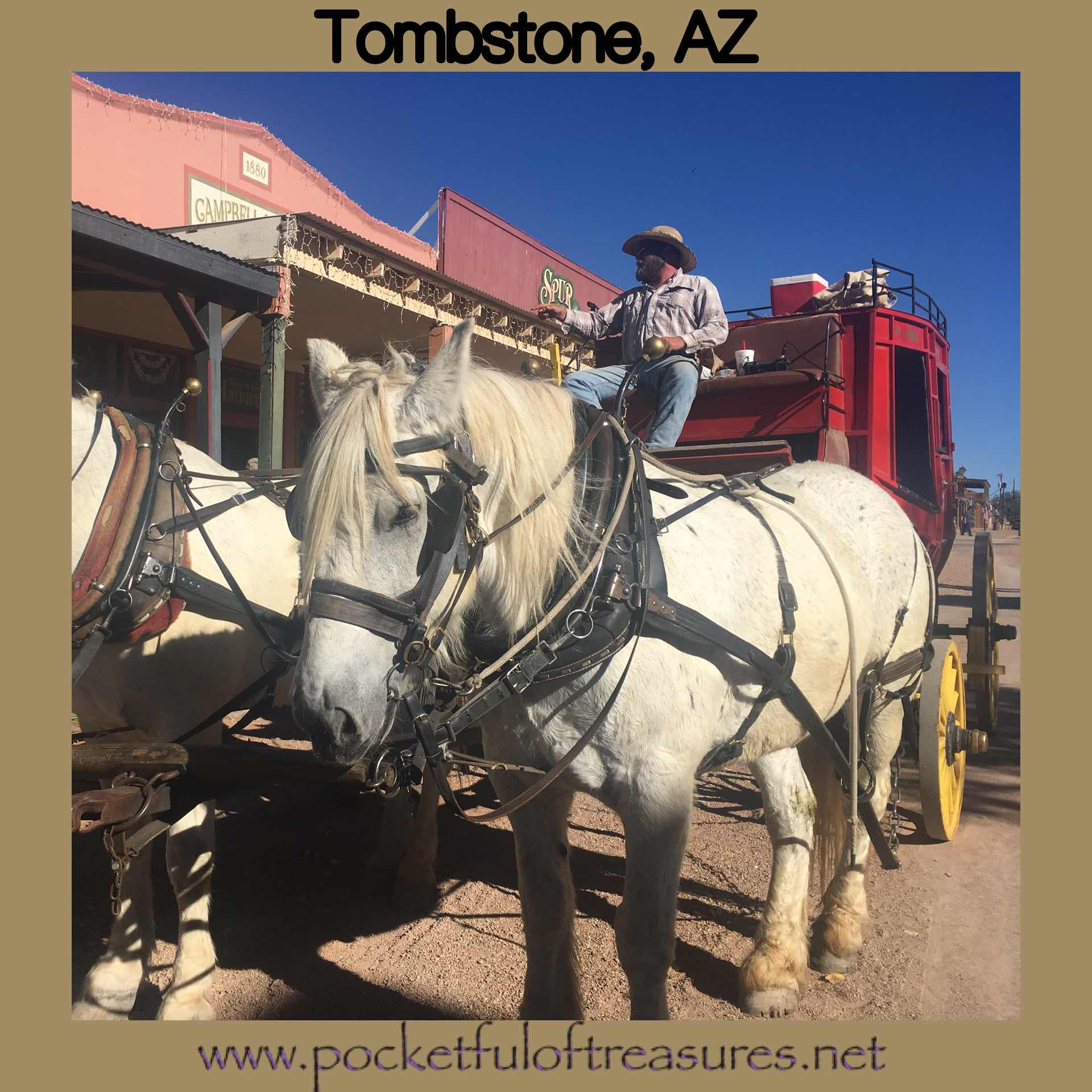 Once our bellies were full, we took a narrated stagecoach tour to acquaint ourselves with the layout and history of the town.  At $10/adult and $5/child (ages 6 and up), it is a great introduction to Tombstone.  The 18 minute tour makes a mile loop down Allen Street and past some of the homes where you’ll hear stories of the early residents. 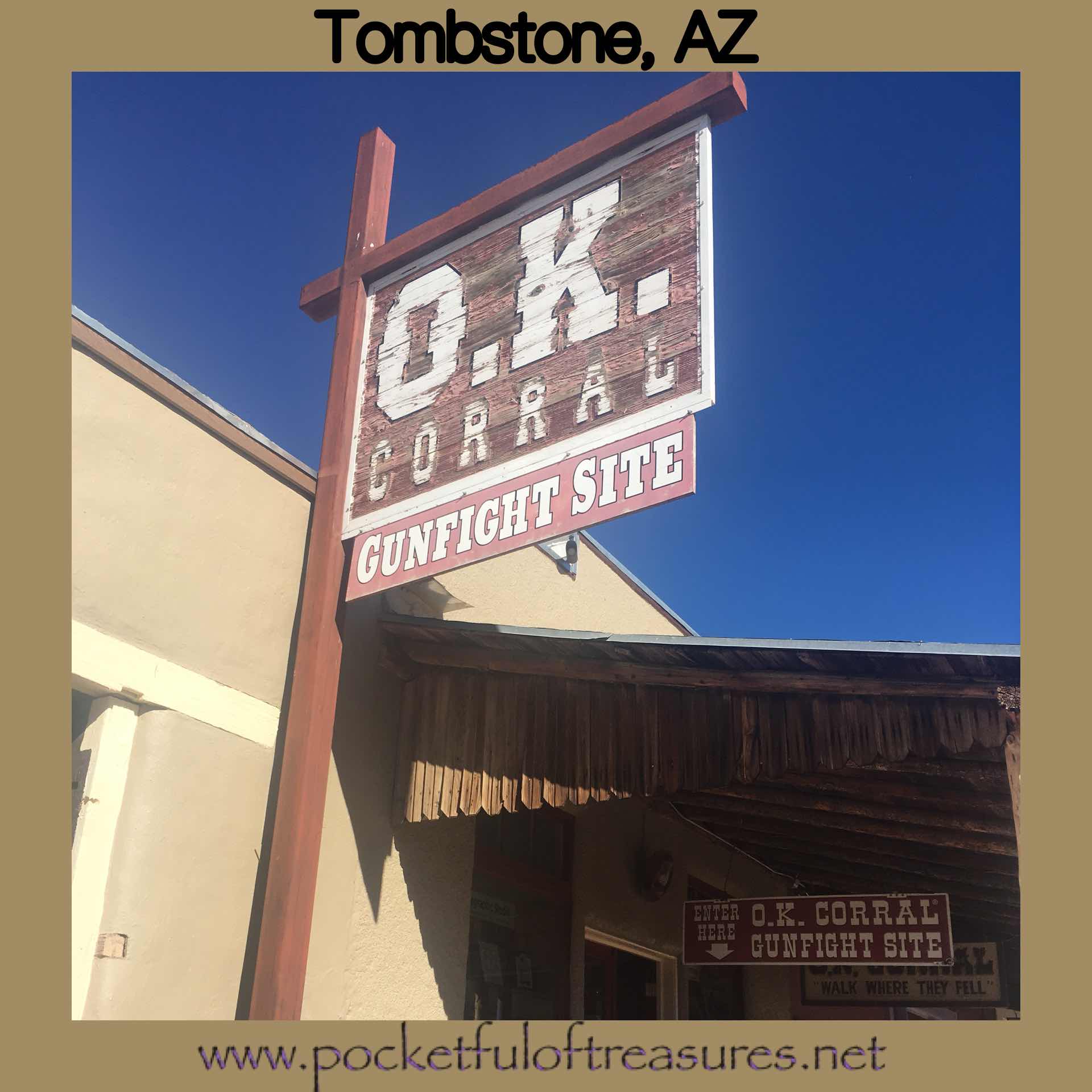 Next we were off to the OK Corral.  Tickets are $10/person (kids 5 and under are free).  The re-enactment of the gunfight was historically accurate and entertaining.  With need for law and order, Tombstone sought out the help of Wyatt Earp who made a name for himself by cleaning up Dodge City.  There was a fued between the Democratic prominent ranchers (like the Clanton and McLaury families) who supplemented their income by rustling cattle and the Earp brothers backed by Tombstone’s business elite.  Tensions mounted and on October 26, 1881 resulted in nearly 30 shots fired in 30 seconds between the lawmen (led by Marshall Virgil Earp, his brothers Wyatt and Morgan, and their friend Doc Holliday) and the Clanton-McLaury gang.  The fight ended with Billy Clanton and the McLaury brothers dead.  There are some neat exhibits in the OK Corral to tour before or after the show, and you can talk (or fued with) the actors. 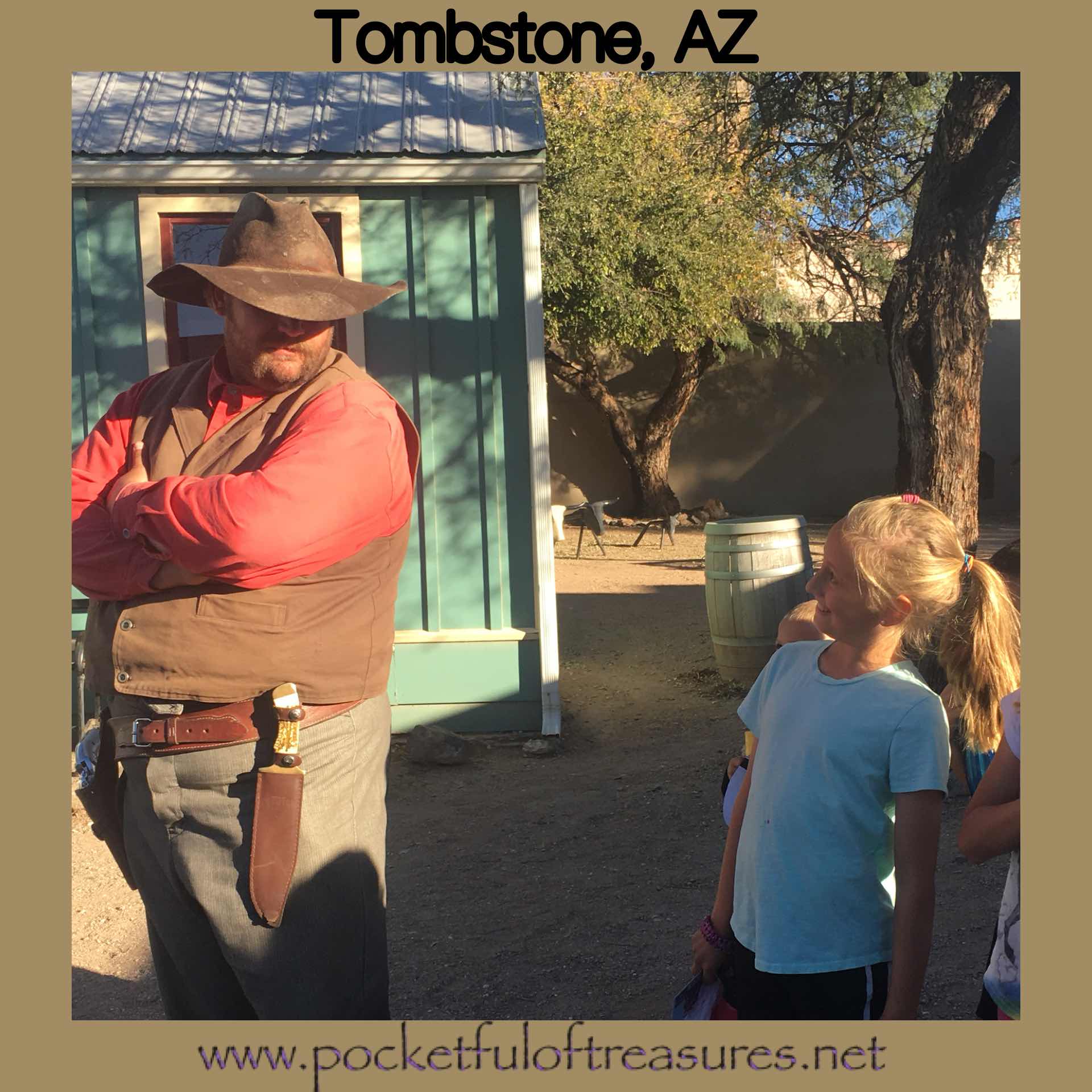 With your ticket to the O.K. Corral gun fight, you’ll also receive tickets to the Historama Theater where actor Vincent Price narrates Tombstone’s history and how it got its nickname “the town too tough to die”.  The town of Tombstone was destroyed twice by fire in the 1880s (the first fire being caused by a barrel of whiskey that exploded), but the city rebuilt both times.  The mines also ran into trouble.  In March 1882, miners in the Grand Central mine hit water and soon their precious silver ore deposits were underwater.  A pumping plant was constructed to keep the mine dry and operational for a few more years, but the pumping plant caught fire and burned in May 1886.  A few months later the cost of silver slid and the mines were shut down.  Tombstone is now a tourist town. 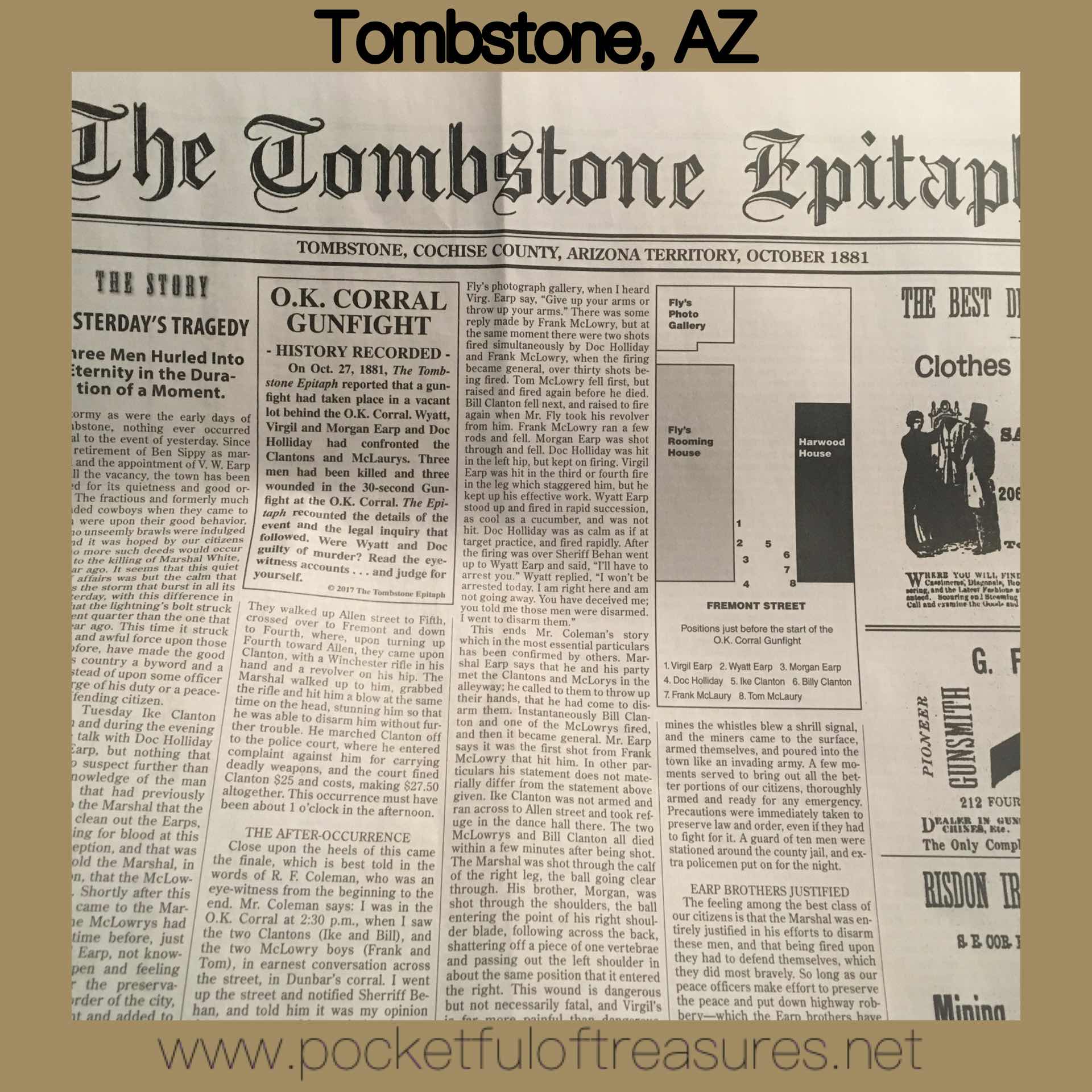 Be sure to stop by The Tombstone Epitaph before leaving town to pick up your free reprint of the 1881 Epitaph with the original gunfight reports.  You can tour the shop and see how the newspaper was printed in the 1880s.  There are several other reprints of historical events in Tombstone available for purchase. 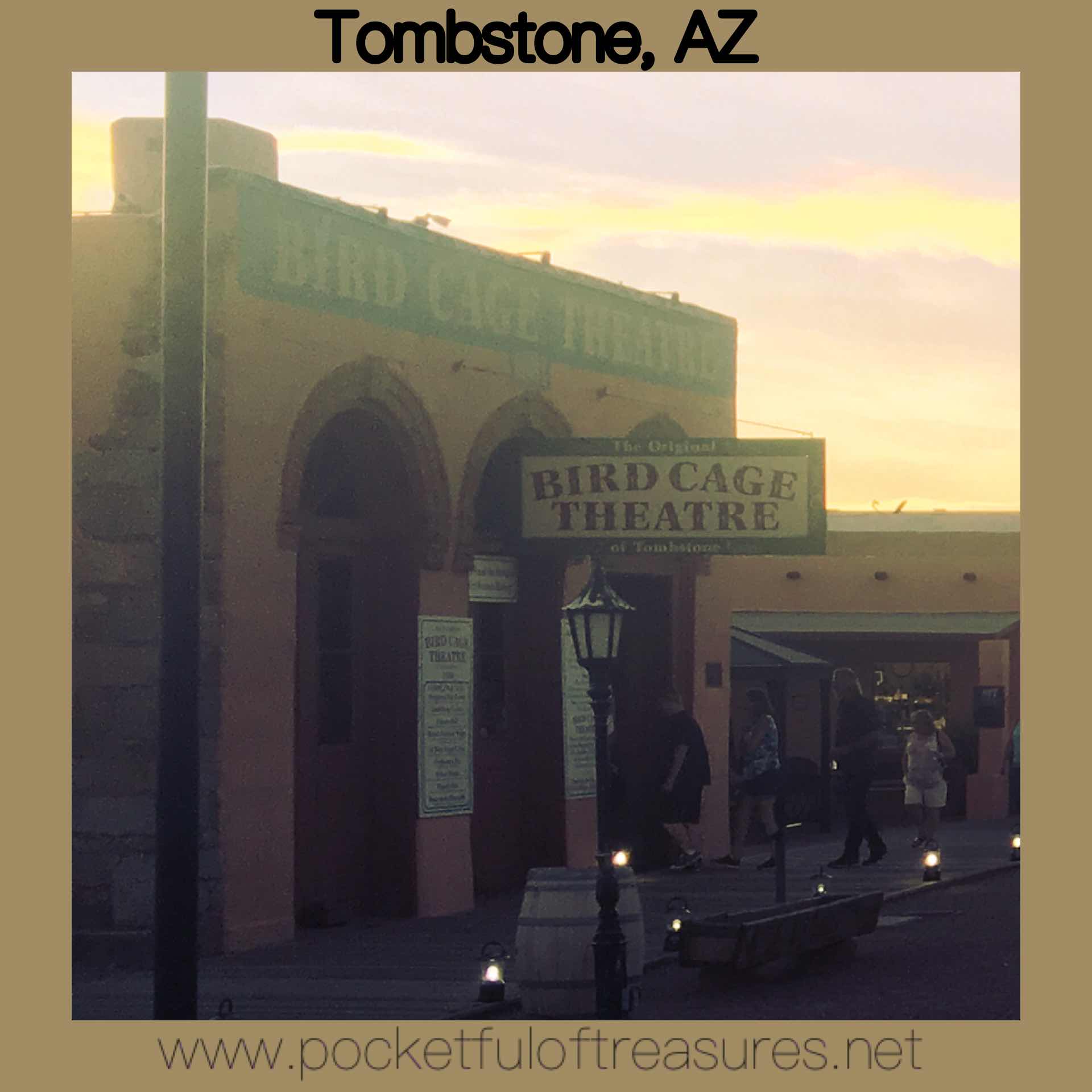 The Bird Cage Theater is the one of the only original buildings that survived the fires and a neat historical site.  Back in its day it was known as the wildest and meanest spot between New Orleans and San Francisco.  Lottie and Willian Hutchinson opened the theater in 1881 with the intentions of making it a respectable family theater.  The economics of the town didn’t support their aspirations and they had to start appealing to the rough mining crowd.  It became a center of drinking, gambling, and prostitution.  It operated 24 hours a day, 7 days a week, from 1881 to 1889. The longest-running poker game was played in the basement of the theater, lasting 8 years, 5 months, and 3 days.  26 people were killed in the Bird Cage Theater and you can still see some of the remaining 140+ bullet holes.  The theater was shut down shortly after the mines closed, and remained closed until it was purchased in 1934.  It is incredible to even walk through a building this old.  Family admission for self guided tours is $34 and worth it!  You can see the stage with the curtains still hanging, the piano in the orchestra pit, the 14 boxes (or bird cages) on the two balconies, and the poker table.  Tables are filled with artifacts from the past.  You can take photos for personal use, but not to post. 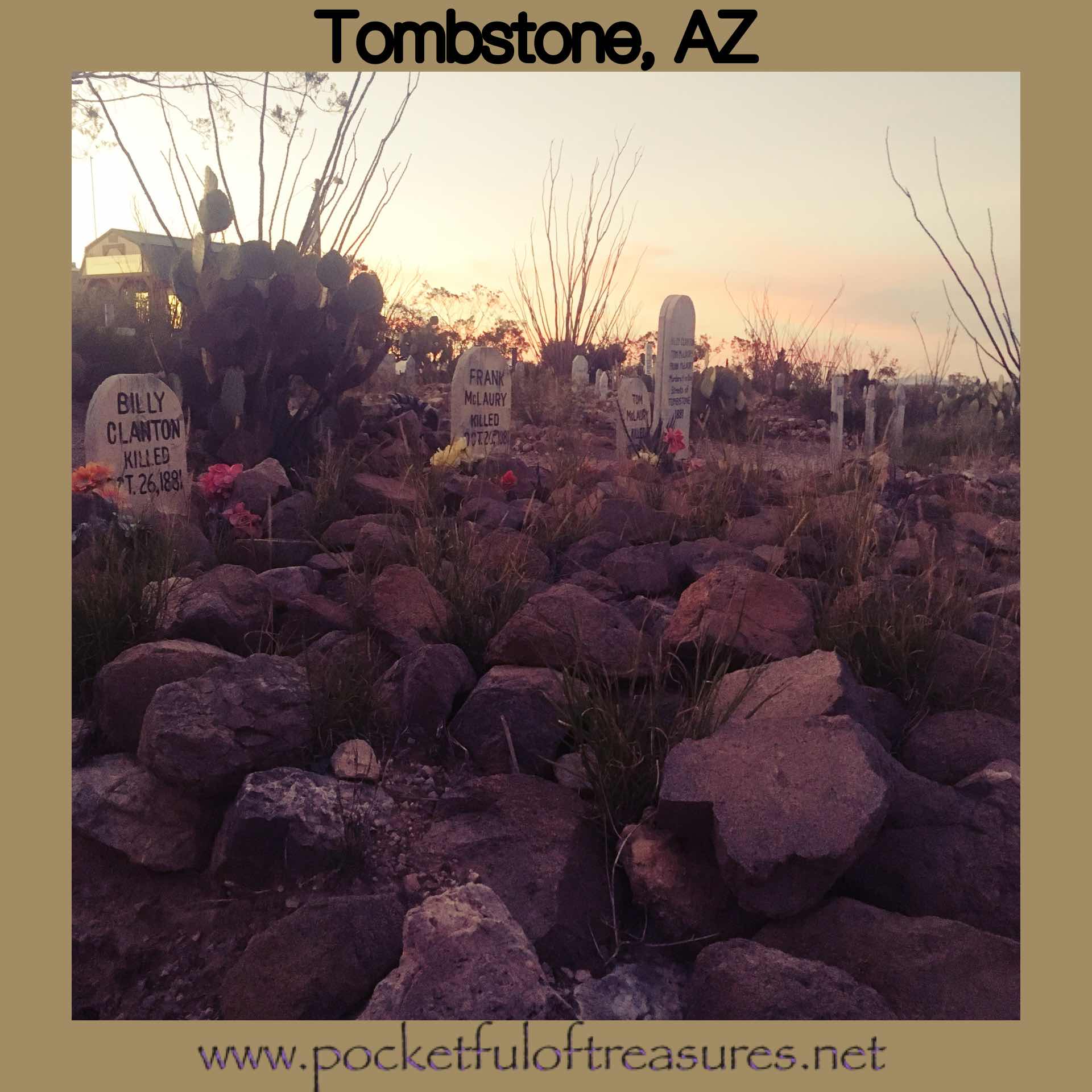 We ended the day at Boot Hill Cemetary.  It led to some great discussions on the consequences of immorality, drunkenness, jealousy, and greed, as the majority of those buried here were murdered and died an early death.  Of course there are also those that fell from mining accidents and disease, and some young children too.  Admission is $3/adult and you’ll get a self guided tour book detailing the names and stories behind some of those laid to rest. 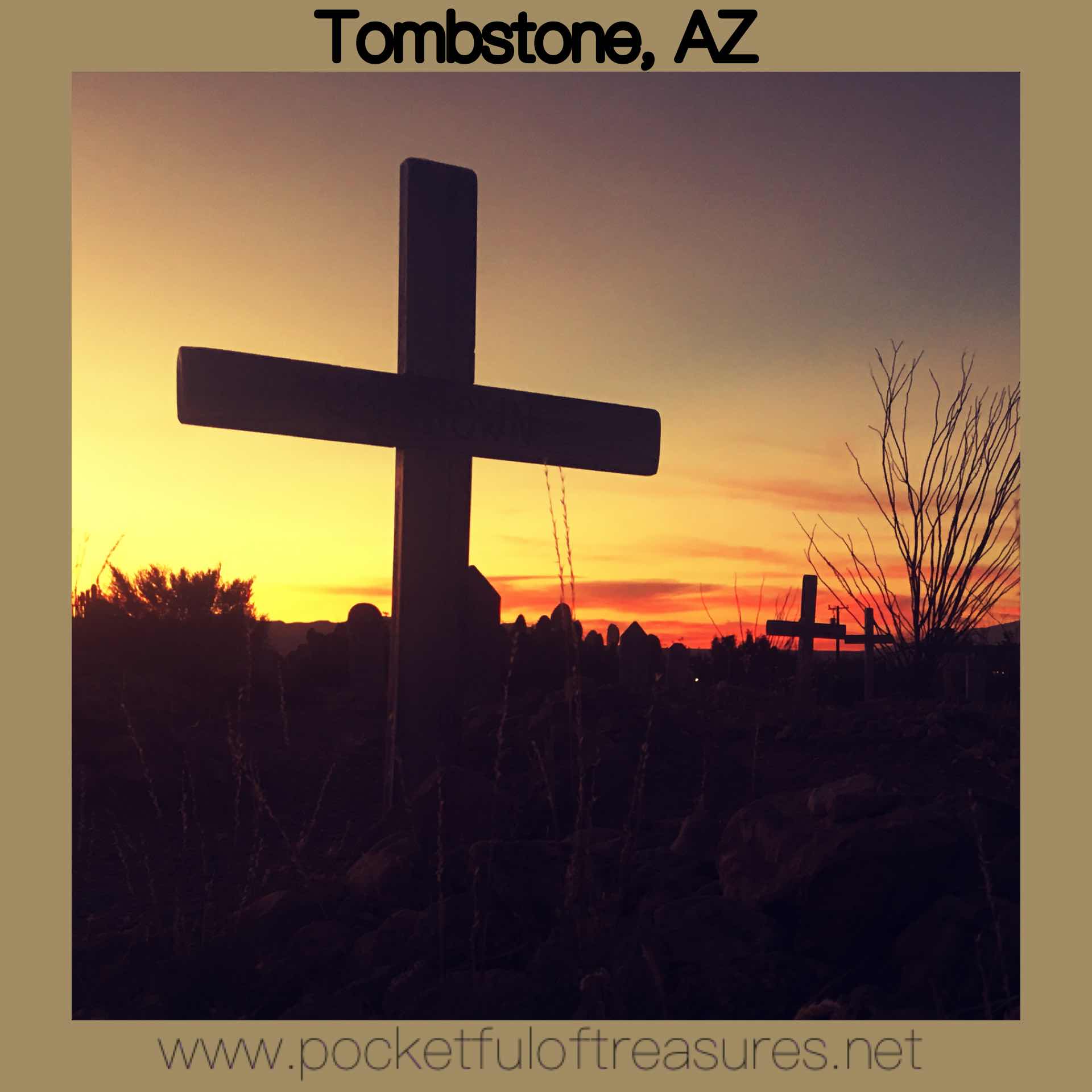 Be sure to check our Travel Page for more adventures in Arizona and across the US!

Interesting. Love your travels. I get free distance learning. Lol.