Thankful Thursday: Children in the Church

What I now view as one of our greatest blessings each week (our children worshipping alongside me), sadly many churches never experience.  But I did not always think that having our young children in church with us would be a blessing.
About a year ago, God began revolutionizing our theology of children in the church.  I had only ever been to churches where children were considered a distraction/disruption that could not possibly ever understand or gain anything from an "adult" worship service and therefore it was best to remove them into age-segregated classrooms where they could have their own "church" to learn about Jesus and God in a watered-down version they could understand (and until age 3 they could not possibly understand anything so they would just attend nursery - a.k.a. play time - until then).  When we had our children we put them into this "system" without questioning it... until "M" started saying we go to church to play with our friends.  That did not sit very well with me, and it was the beginning of about a 3 month journey that ultimately resulted in us leaving our home church.
Some key events God placed in our lives to lead us to this decision:
1.  Church refusing to put "M" into a class where she would at least hear bible stories and sing bible songs because she was still too young.  (And me not feeling okay about a 2 year old going to church to play for an hour.)
2.  My husband being stationed near Waco and us visiting a church where children were included (and sat still, listened, and learned!) in the worship service.  This was a completely new concept for us, and opened our eyes to the possibility that maybe there was another way (and it might even be better!).
3.  Listening to a sermon titled "The History of the Sunday School Movement" and learning the pagan roots of the movement and hearing statistics that show that Sunday School is neutral at best, and a stumbling block for many children.
4.  A digging of the Scriptures.  I had never known the Bible had so much to say on children!!!  Through our studies we found that in both the Old Testament and New Testament children worshipped with their families and there was no precedence to separate them out.  God does not view children as a distraction, but rather a blessing.
“Assemble the people – men, women, and children… so they can listen and learn to follow carefully all the words of the law…” ~Deuteronomy 31:12-13
“There was not a word of all that Moses had commanded that Joshua did not read to the whole assembly of Israel, including the women and children, and the aliens who lived among them.” ~Joshua 8:35
“While Ezra was praying and confessing, weeping and throwing himself down before the house of God, a large crowd of Israelites – men, women and children – gathered around him.  They too wept bitterly.” ~Ezra 10:1
“…Gather the people, consecrate the assembly; bring together the elders, gather the children, those nursing at the breast.  Let the bridegroom leave his room and the bride her chamber.” ~Joel 2:15-16
From the New Testament verses of Matthew 18:1-5, Matthew 19:13-15, Ephesians 6:1-4, and Colossians 3:20, we can also gather that children were welcomed and present for the teaching of God and the assembly of the church.
5.  Lots of prayer!!!
Deciding to leave our home church and "family" was one of the hardest decisions that we have had to make, and yet over and over again we felt God calling us to obedience.  What made it even more difficult for me is that this all occurred as my husband was away preparing to deploy (I'm sure it was difficult for him too in a different way).  But while obedience brings some opposition and challenges, it brings far more blessings!  The first Sunday I showed up at this new church (now our new church home) both kids screamed the entire service.  The next week did not go much better.  Nor the next.  But rather than getting rolling eyes or looks of disapproval, I received encouragement and support.  It was a very humbling process for me, but the rewards are great.  Now, almost 9 months later, our children sit and listen in church (for the most part... they still occasionally need some discipline).  It is incredible to me how much their little minds absorb.  And, the church is invested in our children and family.  They have not taken our children away from us to train them, but have rather come alongside us as a family to support us in training our children.
Each week all of the children in the church (and there could possibly be more children than adults in the church!) go up front to sing.  "M" is just starting to get to know all of the songs and sing along, and "Boo" went up there for the first time last week (Her sister took her hand and walked her to the front... when they were finished, another little boy took both of their hands and escorted them back to their seats.  It was very sweet!). 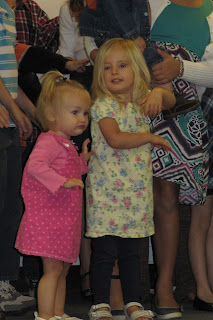 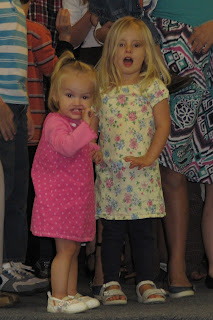 Email ThisBlogThis!Share to TwitterShare to FacebookShare to Pinterest
Labels: blessings

I'm so glad you've found a church that doesn't "kick the kids out". I grew up in church where we had CHURCH and then we had Sunday School after - we were supposed to go to BOTH (and they had coffee in the cafeteria for the parents who waited the hour for their kids to get the "age appropriate lessons" :-P)

I'm never excited about "no kids" churches, although our current one is a "kick the kids out" church - however, it's voluntary, and so is the Nursery - and there ARE still kids who COULD be in both areas that sit through mass VERY well.

Good job M and Boo on participating fully!! (Yay Mama for getting to a place where they could!! :-D)

Betsy, glad you can keep the kids in your church without feeling pressure to have them removed from the service!

Our church does do Sunday School for EVERYONE (yes, us big kids are still learning too!) before church on Sunday, and I enjoy that too :o)